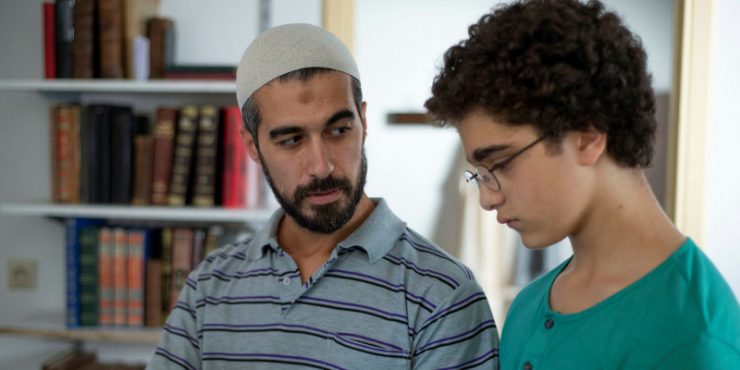 The tenderness of the films from the Dardenne brothers are usually contrasted by worlds offset by calamity. Their characters are often forced into inherently unfair circumstances that are made worse by their suspect judgment and poor behavior. Young Ahmed, their most recent film, deals with a young Muslim boy, the titular Ahmed (Idir Ben Addi), in Belgium. Under the sway of an extremist Imam (Othmane Moumen), Ahmed is convinced that his teacher (Myriem Akheddiou) is an infidel, and begins his plot to kill her. Like most thirteen year-old boys, his grand plans do not come to much, but Ahmed is forced to do time in a juvenile detention center, where he does his best to affect rehabilitation and gain freedom, so that way he can follow through on the plan that he failed to complete.

What is the crime of Ahmed’s teacher? She wishes to teach her students more colloquial Arabic by using songs, as opposed to the more traditional way of teaching through the verses of the Qur’an. Her plan is heretical declares the Imam, and Ahmed believes him. Ahmed believes nearly everything the Imam says, much to the dismay of Ahmed’s mother (Claire Bodson), who frantically tries to steer her son away from this radical approach. His mother’s methods are also forceful and blunt – she’s alone and at her wit’s end – and do little to sway the teenager from his newfound piety. Like a lot of Dardenne films, backstory is scarce. Ahmed’s father is gone and his cousin has also gone down the road of Islamist Extremism. These are the few details we are given for Ahmed’s transformation. “I wish you were like before,” his mother cries.

The Dardenne brothers’ disdain for exposition plays a large role in the intimate nature of their films. The direct, documentary style is what propels the tension of their stories. That is certainly the case here. I do wonder how well this story is aided by the approach, though, with the personal nature of Ahmed’s story quickly fading into generalities about the dangers of Muslim teachings. Young Ahmed‘s stern focus on extremism gives little room for more tolerant teachings of Islam, scaling the religion down to its opposition’s most basic fears. I don’t think that the Dardennes are trying to make an anti-Islam film, but the work here feels flimsy, and their view too narrow. In trying to turn a story of theological enlightenment into a teenaged coming-of-age tale, Young Ahmed becomes a film rapt in stereotypes.

The film plays an interesting game with its audience. As Ahmed begins to progress in the detention center, we’re left mostly to guess as to how much that progress is legitimate and how much Ahmed is pretending. He harbors his homicidal thoughts throughout the majority of the film – or does he? The film owes a great debt to the performance from Idir Ben Addi, which is deft and fierce, a solid snapshot of naiveté bolstered by intractable allegiance. The rest of the film’s cast is superb as well, flourishing in the Dardennes’ loose style which often benefits their actors. The brothers have often succeeded in making stories about ideological confusion, where the beliefs of their characters are thrown topsy-turvy. Whether they’re an authority on Islam, I could not say, but there is something uncomfortable about their attempt here.