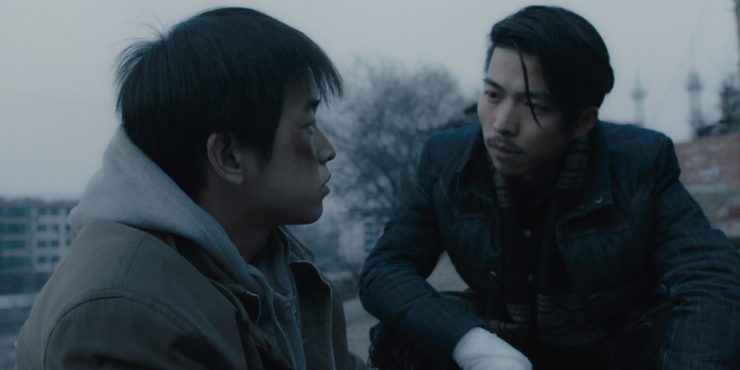 Place Hu Bo among the ranks of the tragic artists, the ones lost well before we were prepared to see them to go. An Elephant Sitting Still is his only feature film. He committed suicide in 2017 after he had finished it, his death likely forever linked to this film, as if an addendum to its central thesis. If that sounds bleak then you would have found the most correct word to describe this film, which is set during a gray, overcast day in a morose, industrial city in Northern China. Another good, monosyllabic adjective for this film would be ‘long’, which it certainly is, at nearly four hours in length. Long and bleak are not usually words you’d use to describe many great films, but that is what Hu Bo made here, a movie that gets to the heart of the isolation inherent to the human condition.

An apprentice to legendary Hungarian director Béla Tarr, Hu Bo certainly borrowed his mentor’s penchant for long, piercing takes, often lingering on images for many minutes at a time. The camerawork (cinematography by Fan Chao) is almost exclusively handheld, often inches away from the characters’ faces. The rest of the world will disappear around them, as if even the person they are having a conversation with is a total stranger. There’s no limit to where the camera will follow – out a window, down many a long, dark hall – creating imagery that is at times both hyper realistic and ethereal, engulfing the characters into their own self-hatred. The lyrical paths creates something that may look impromptu, but is in fact an example of great skill.

Hu Bo then subverts our own expectations with the long takes, by intercutting the four main stories together, and straying away from a shot we may have just finally gotten comfortable with. Those four stories vary in their interconnection throughout the film. One is about Yu Cheng (Zhang Yu), a low-level gangster with clinical apathy whose closest friend has just killed himself. Another is about Wei Bu (Peng Yuchang), a student with an abusive, diabled father. Wei Bu’s closest friend, Li Kai (Ling Zhenghui) is having trouble with a school bully, another student who happens to be Yu Cheng’s little brother. Another story involves Huang Ling (Wang Yuwen), another student with a troubled parent. In her case, it’s an uncaring mother with a possible dependence issue.

The last story involves Wang Jin (Liu Congxi), a retired grandfather who lives in Wei Bu’s building. Wang Jin lives with his son, daughter-in-law and his young granddaughter. The first time we see Wang Jin, his son is discussing their home situation: he and his wife want Wang Jin to move into a nursing home so they can sell the apartment and move into a smaller place that will be closer to their preferred schools. Wang Jin meekly objects – it is his apartment after all – but the look on his face shows that he has already lost the argument. Wang Jin has lived long enough to see himself become a burden, both physically and financially. The monetary value of his existence is laid bare. The family cannot afford both a better neighborhood and to keep grandpa. At his age, Wang Jin cannot expect the family to make sacrifices for him.

Wang Jin’s story is the most obviously symbolic of the film’s themes of helplessness against a cruel, Darwinistic world. Wei Bu, Huang Ling and Wang Jin are all judged as figures of weakness by those around them. Moments of rage spark violence out of Wei Bu and Huang Ling, as the vultures circle, not expecting their show of force. The same is true for Wang Jin, who is placed in a dangerous spot when he tacitly agrees to help Wei Bu get out of trouble from would-be attackers. Meanwhile, Yu Cheng is pegged as a man of intimidation, even though he can hardly work up the effort. When his brother is brutally beaten at school, it is assumed that he will find the person responsible. His real interests lie elsewhere. Tension and violence surround all four throughout the film, leading them all toward escape from their hopeless town.

They’ve all heard a story of a circus elephant in Manzhouli, who sits in the middle of his tent, unmoving no matter what he is encountered with. This elephant, unremarkable but strange in their descriptions, becomes an odd preoccupation for all of them. They’re curious to see this elephant and as their situations become more and more dire, a trip to Manzhouli to visit it seems more and more inviting. The elephant’s significance speaks more to the desolation of the characters than it does to its actual appeal. Devoid of purpose and without an outlet to express their anguish, a final destination materializes for those with nowhere else to go. Suffocated by past and present sins and searching for meaning, an allusive elephant becomes a welcome substitute for this collection of lost souls.

Throughout An Elephant Sitting Still‘s many confrontations, the violence is usually kept off screen, the camera usually focusing on the perpetrator as they react to the horrors in front of them. Their responses are nonchalant, almost catatonic. These are people paralyzed by the brutality of their society, which considers every person and thing in terms of value. Conversations often circle around and around ideas of financial obligations and how they measure against living things. Hu Bo was fascinated by the people who are cast aside in this inhuman system, going through life mostly on muscle memory, grasping toward any semblance of hope that may be. Perhaps the film is heavy handed in its half-glass empty ethos, but then how do you explain the elephant? Perhaps you’d prefer not to; the film certainly doesn’t. What the film does tell us is that the elephant inspires these characters to keep going, and search out something to keep living for.