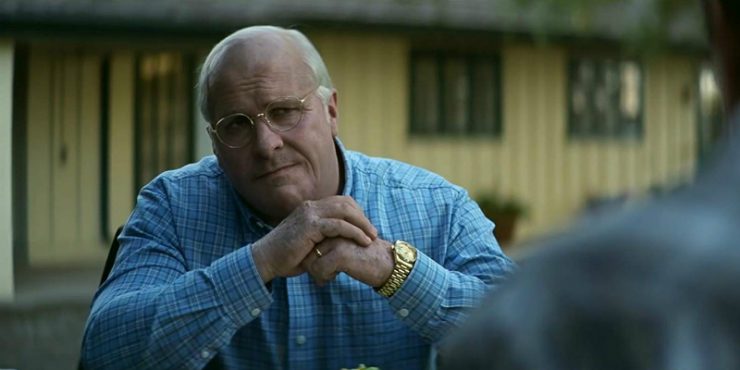 The lumbering frame of Dick Cheney has always been a mercurial figure in the annals of contemporary Republican nastiness and wrongdoing. The buffoonery of figures like Trump and George W. Bush are easier to target, more open to direct ridicule and scorn. Vice wants to move around the pieces on the game board (sometimes literally), to reorient how you feel about pre- and post-Obama conservative flourish. Cheney, a hearty, vicious man who was content to be a background specter as long as it netted him endless political capital, is the focus of this new film by Adam McKay. The funnyman-turned-pundit hopes to put a point on someone who may have flown under the radar; to create a monstrous mythology out of a man completely lacking in charisma, and completely lacking in accountability.

This is McKay’s follow-up to The Big Short, which won him a screenwriting Oscar and changed the director’s legacy from Will Ferrell’s creative partner to a new generation’s Oliver Stone. Between the two films, he also produced Succession, an HBO series about a power-hungry family filled with Machiavellian pawns. The show plays part and parcel with McKay’s new image. McKay’s latest movies are still funny, pumped with clever sight gags and intentional editing quirks that play up the absurdity of our fraught political moment. With Vice, the stakes are much higher, especially since the movie posits that pretty much everything that’s wrong with America hinges on Cheney’s ruthlessness as a bureaucratic hangman. McKay’s methods are scathing and unsettling, never forgetting an opportunity to play up the consequences of Cheney’s decisions.

Cheney is played notably by Christian Bale, who once again wildly changed his weight for a character, gaining the needed girth to portray the physically and spiritually gluttonous man. Bale is such a brilliant technical actor, as well as a notorious physical transformer. It seems you can’t get one without the other, but I always find it a shame that one gets much more credit. His performance of Cheney is uncompromising, and it’s his job to keep a steady hand while McKay’s script and direction whirl around him. This is a mostly great performance (at times, I felt the machinations too keenly), filled with ticks and gestures that will bring back many unwanted memories. Bale encapsulates Cheney’s ferocious nature, but also the insecurity of living inside of a failing body that has suffered numerous heart attacks.

The film tracks Cheney from drunken Yale dropout to Vice President under George W. Bush, an administration that watched over 9/11, the Iraq War and an economic collapse. Bush (played here with boyish cluelessness by Sam Rockwell) is often the mocked clown in this chapter of history, a ne’er-do-well who was never meant to be in the White House to begin with. Vice illuminates some past similarities between Cheney and Bush’s pre-political life, but also highlights their differences: Cheney always sought more power, Bush had trouble finding comfort with the power he had. The whole way, Dick is pushed by his wife Lynne (Amy Adams), a Lady Macbeth figure who is always steering him to pursue his ambitions, to embrace a political career that she, as a woman, cannot have.

There are speed bumps. Cheney is always weary of his daughter, Mary (Alison Pill), whose homosexuality was always a lingering demerit that the Vice President chose simply to be silent on. Bush, an imperfect candidate, has to basically beg Cheney to accept the “nothing job” of the VP. He takes it only after Bush unwittingly agrees to gift him an unprecedented amount of executive power. That unchecked authority leads to a rise in all things from conservative media enterprises stirring distrust in journalism to horrifying, misguided military campaigns in the Middle East. This destabilization, Vice posits, is the reason America is the way it is today. McKay’s script – which is impressive in its dexterity if nothing else – is so fluid, so beleaguered by symbolism, it stirs up a story so outrageous, it’s hard to argue against it.

I mentioned Oliver Stone earlier because that is the director I think of foremost when it comes to this kind of filmmaking. Like Stone, McKay’s last two movies treat the audience as if they are blessed benefactors, being spoon fed graciously by the filmmaker’s vast political insight. Never mind that Vice utilizes various types of aforementioned symbolism, it also asks characters to look into the camera and explain these symbols, to contextualize it for you, to give you permission for outrage. I was at times embarrassed by how little Vice trusts its audience’s intelligence, and struck by the fact that if Stone had in fact made the same film, it would be called a piece of hackwork. The truth is that films like Vice too often love the naughty Republicans they claim to despise, and mine great entertainment from their folly.

Perhaps I am fatigued with these stories, and perhaps I was content with simply knowing that Dick Cheney was evil without having the specific evidence to prove it. It strikes me as particularly obvious, more so than other movies of this ilk, that Vice would have never been made if Trump hadn’t gotten elected. And this kind of response (to further deconstruct the minds behind ruinous conservative policy) is simply overdone at this point. This is a very intelligent film, at moments. The editing (by Hank Corwin) is a biting achievement, recalling the fierce relentlessness of Thelma Schoonmaker and Martin Scorsese, but McKay’s direction is so heavy-handed. Gifted with so many great performances (including a deliciously funny Steve Carrell as Donald Rumsfeld), I’d hoped that there would be a clearer picture. Instead, McKay constructs the kind of film that Michael Moore is always criticized for. Vice‘s cynicism is not unearned, but it’s not exactly executed well either.

Written and Directed by Adam McKay