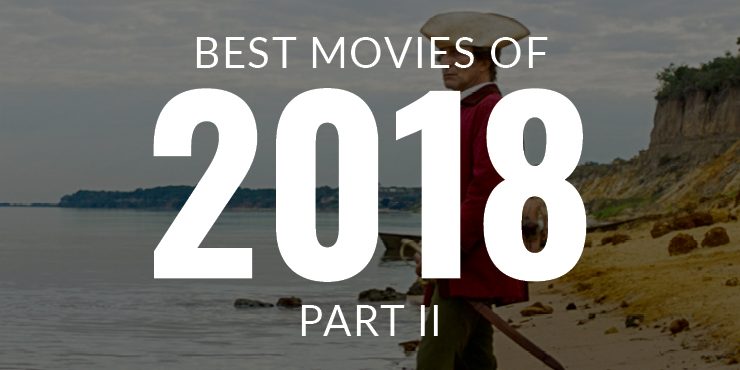 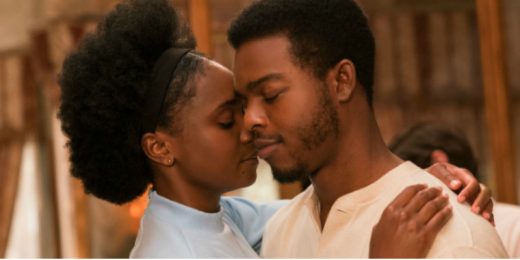 1. If Beale Street Could Talk
Directed by Barry Jenkins

Making a follow-up to Best Picture winner Moonlight would have been a daunting enough task, but choosing to adapt James Baldwin is an especially courageous undertaking. The end result is an astonishing thing of beauty, a lush testament to the eternal power of love. Set in mid-century New York City, Jenkins translates Baldwin with fidelity and great affection, encompassing the tremendous author’s powerful prose with stunning filmmaking. A strong ensemble cast, led by young stars KiKi Layne and Stephan James, and including terrific supporting turns from Regina King and Brian Tyree Henry, fills the film with compassion and humanity. Seeking to match Baldwin’s stirring combination of sensual romance and biting social conscience, Beale Street‘s evocative imagery – aided by James Saxton’s gorgeous cinematography and Nicholas Britell’s moving score – creates a lasting picture of love. The kind that can conquer anything. 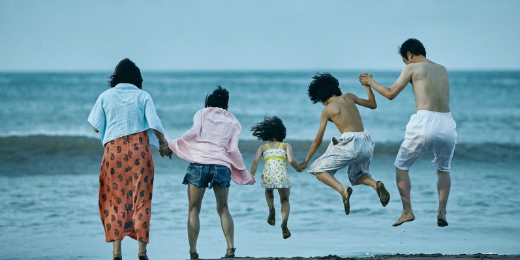 A film that can be as touching as Shoplifters is usually much more sentimental, but alas, that is the genius of Hirokazu Kore-eda, whose slice-of-life dramatic style brings complexity to the mundanities of human existence. The cast of characters in this makeshift family work together – often through illegal means – to stay above water in their make-shift Tokyo home. Through these characters, the film explores themes of loyalty, morality and the preciousness of human connection. Spared the burdens of biological association, the group in Shoplifters create something like a utopia, where their actions are less constricted and the responsibility for their happiness falls squarely on their own shoulders. There are times, while watching Shoplifters, where I felt the utopia, and I watched with great envy at the characters’ charm and compassion, but this is where the film becomes truly compelling: living in a society that cherishes tradition, this clan’s lifestyle cannot last forever. Sakuro Ando highlights a phenomenal ensemble which also includes Lily Franky, Mayu Matsuoka, Kairi Jö, Miyu Sasaki and Kore-eda veteran, the late Kirin Kiki. 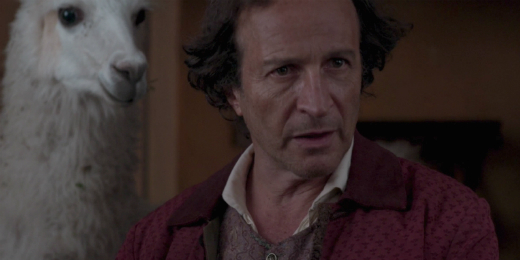 This feverish costume drama, following the titular Spanish magistrate Diego de Zama (a perfect Daniel Giménez Cacho), is a humid, claustrophobic exploration of a man’s desperate quest to erase the sin of colonialism from his consciousness. Born in South America but in service of the Spanish crown, Zama spends the entire film dreaming of a transport to his real homeland, only to be met with frequent rebuffs, delays and outright refusals. Haunted by lethargic natives, unquenched sexual desires and a mythological outlaw named Vicuña Porto, Zama can feel his humanity slowly turning into mush, and director Lucrecia Martel hones the film on his decay. Compelling with a generous dose of the surreal, Martel’s film is unsettling, shockingly funny and unwavering in its view of Zama’s downfall. 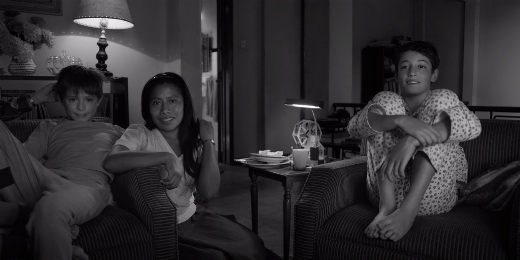 This love letter of nostalgia for home and family is the most touching film I saw this year. Filmed in writer-director Alfonso Cuarón’s hometown of Mexico City, Roma is a deft dedication to the character of Cleo (played beautifully by first-time actress Yalitza Aparicio), a house servant whose dedication to her employers has few limits, emotionally and physically. Cast against a backdrop of political turmoil in 1970’s Mexico, Cuarón shrewdly inhabits all corners of the screen, background and foreground, to create a phenomenal canvas of stirring imagery. Shot by Cuarón himself, in crisp black and white cinematography, Roma‘s warmth shines through the screenplay’s moments of tragedy and loss, exemplifying the film’s epic sense of scale for the human condition. 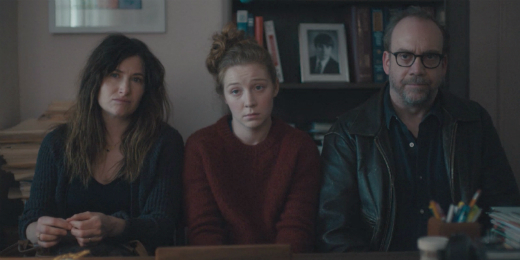 Private Life highlights the best that writer-director Tamara Jenkins has to offer. In her first film since 2007’s The Savages,  Paul Giamatti and Kathryn Hahn star as a married couple in their 40s, trying to have a baby through various means. Bogged down in the complication and bureaucracy of adoption agencies and IVF cycles, the stresses and vulnerabilities take a tole on their relationship and their sanity. Jenkins could have easily made this a melodrama of marital discontent, but instead she brings the character of Sadie (a great Kayli Carter), a step-niece who crashes on their couch and presents them with an opportunity to learn what being a parent is all about – in more ways than one. Incorporating Jenkins’ patented sardonic humor, this minor-note dramedy is tremendously acted, meticulously written and remarkably well-directed. Its stark humanity sets it apart amongst this year’s indies. 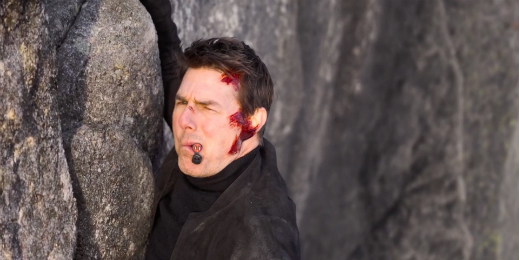 I am always here for any and all displays of Tom Cruise’s morbidly oversized egomania. His latest testament to his own greatness – and the sixth installment to his Mission: Impossible franchise – is an astonishing thrill ride, a non-stop action roller coaster that combines Mad Max: Fury Road‘s angry energy with a Marvel movie’s sense of grandeur. Cruise – doing as many stunts as he’s allowed – jumps out of planes, jumps out of windows, destroys bathroom mirrors and sprints for seven straight minutes. Director Christopher McQuarrie ups the ante with Fallout, and the film’s script (also by McQuarrie) is layered with reference to notorious IMF agent Ethan Hunt’s wavering stability. At 54, Cruise is wise to litter minor moments of humility throughout Fallout, and the film’s greatest moments are when the world’s greatest movie star is in the most peril. 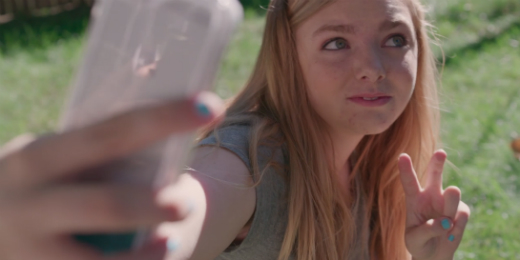 Anyone familiar with middle school can probably identify with Eighth Grade, and may also be made to feel incredibly uncomfortable by it. Elsie Fisher is Kayla, a socially awkward teenager on the verge of finishing middle school. She has a YouTube vlog filled with pep talk videos, spewing benign self-help tactics and messages of self-appreciation. She doesn’t seem to adhere to these messages in her everyday life. Her father (played by Josh Hamilton who may be giving the most perfect performance of 2018) is patient and loving, but still has little recourse for understanding Kayla, who only wants acceptance from her peers. Writer-director Bo Burnham (his first feature) perfectly creates the hellscape of discomfort and insecurity that is the early teenage years, and manages to do so without any judgment or moral hand-wringing about the absurdity of teenage behavior. That he pulls this off feels like a miracle. 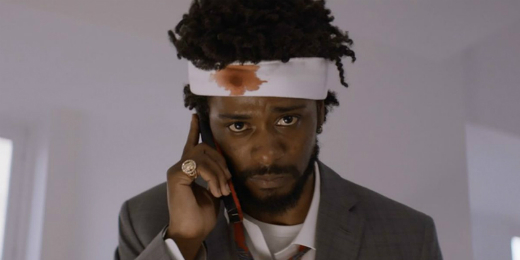 8. Sorry to Bother You
Directed by Boots Riley

There is no film that I have seen, as of yet, that more perfectly illustrates the hopelessness and insanity of trying to exist in Trump’s America – and his name isn’t even mentioned once. First-time director Boots Riley orchestrates a supremely absurd anti-capitalist screed starring Lakeith Stanfield as a millennial telemarketer who finds grand professional success when he learns to use his “white voice”. Despite that premise, Riley’s film isn’t solely a satire on race. Labor, gender & sex, and de-industrialization are all giant fish in Riley’s comically small barrel. Also starring Tessa Thompson, Armie Hammer and Steven Yuen (who is also great in this year’s Burning), this hilarious comedy digs feverishly into our society’s nastier realities with shocking, sometimes unsettling imagery. 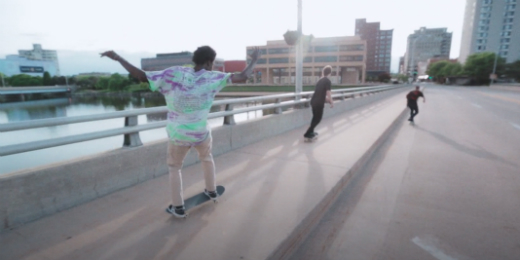 Rockford, Illinois is one of those lost American cities often eulogized in films and books, filled with hollowed-out buildings and dilapidated homes. Rockford is the hometown of filmmaker and skateboarder Bing Liu, a survivor of child abuse. Liu returns to his hometown to explore himself and his origins, but ends up getting sidetracked by the stories of his friends and fellow skateboarders, Kiere and Zack. Following these two young men, and their diverging paths in and out of Rockford, Minding the Gap evolves into a stunning dissection of the various ways domestic violence affects the lives of parents and children, and the ripple effects it has throughout a family. Filled with heartbreaking interviews and a bevy of crisp, handheld skateboard photography, Minding the Gap was the biggest surprise of anything I saw in 2018, and one of the very best films of the year. 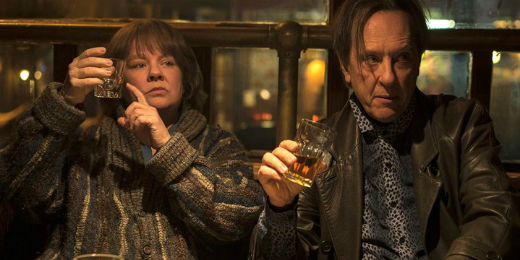 10. Can You Ever Forgive Me?
Directed by Marielle Heller

Can You Ever Forgive Me? is about Lee Israel (played brilliantly by Melissa McCarthy), an author whose fledgling book sales have caused her to resort to plagiarism. Can You Ever Forgive Me? is also about so much more. Among them: the encroaching existential crisis of middle age, the mellow vibrancy of 1990s Upper West Side, and the delicate anonymity of queer culture at a time when there was less tolerance. Director Marielle Heller (working with a script co-written by the great Nicole Holofcener) weaves all these things into a sharp, tidy dramedy about an unhappy woman reinvigorating a talent she may have always knew she had. Richard E. Grant also gives a great performance as Lee Israel’s dastardly sidekick in crime, Jack Hock, and the two veteran actors – whose great chemistry prove that romance is not a prerequisite for a solid opposite-sex pairing – give this delightful indie incredible depth.