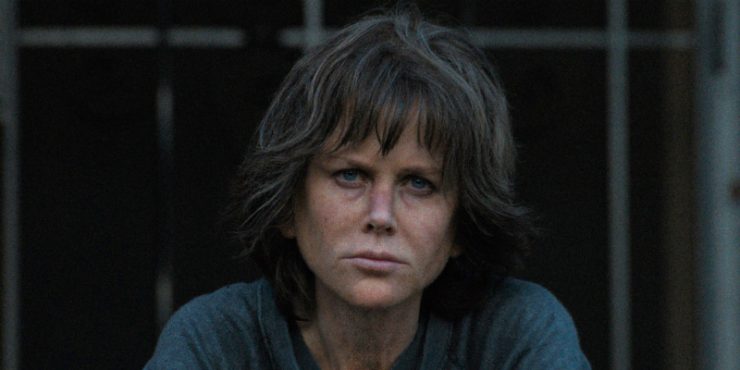 The hook of Destroyer – taking one of our best, most beautiful movie stars and dirtying her up – is an old one. We’ve seen it often, and awards have been won by actors both more and less talented than Nicole Kidman, Destroyer‘s star. Here, Kidman looks to have been dusted with dirt, her face is pale and colorless, her hair dried out and stringy. Basically, her anguish is externalized. I can’t say that I find the hair and make-up work that impressive here, though in a way that seems to be the point. This film, directed by Karyn Kusama, is dollar store pulp, a deep dive into the LA cop drama milieu. It has Michael Mann’s smoothness of narrative but with a gritty, visceral ferocity on the surface. This is Kusama’s first feature since 2009’s Jennifer’s Body and it’s well worth the wait.

The film’s script – written by Phil Hay and Matt Manfredi – is a circular, noirish thriller about an FBI agent (Kidman) named Erin Bell who finds herself thrust back into a former case she thought she’d left behind. The case involves a bank robber named Silas (Toby Kebbell) who has reappeared after over over a decade of hiding. Bell was once undercover in his crew, along with a fellow agent named Chris (Sebastian Stan), with whom she fell in love. At the beginning we know that their undercover work went South and innocent people were killed. Finding out how and exactly why is part of the charm of the movie’s script which flashes backward and forward between Bell’s sunnier past and her gloomy present. Added to Silas’ comeback, Bell also has a teenaged daughter, Shelby (Jade Pettyjohn), who has little regard or patience for Bell’s wasting state, which makes the new pursuit of the dreaded Silas even more difficult.

Destroyer, in and of itself, is nothing particularly special, but Kidman’s performance and Kusama’s direction very much is. The film’s taste for brutality and torment runs throughout, placing the film and its star in precarious situations. Alongside Lynne Ramsay’s You Were Never Really Here, we have a film that truly understands the nature and lasting effects of trauma. Kidman’s Bell is damaged beyond repair, and knows the only road to redemption lies in her own destruction. Very early on, Destroyer accepts that bargain, creating a haunting thriller that amps up with each scene’s reveal. Hay and Manfredi’s script, which is good but old hat, gets a boost from its director and star which turn this turnkey cop drama into a bonafide psychological suspense drama.