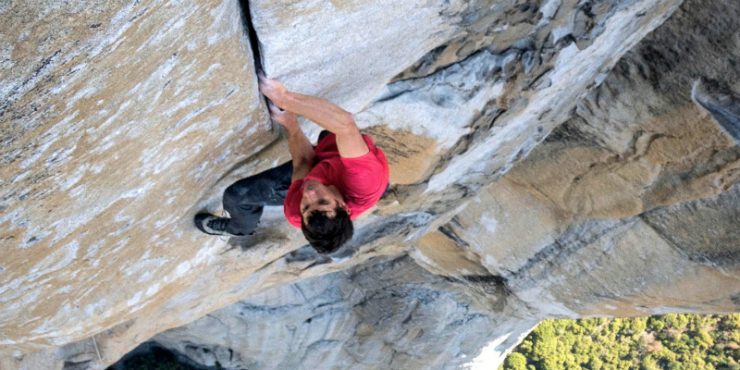 There are many tragic versions of the events within Free Solo. The documentary mentions a number of them. The term “free solo” refers to mountain climbing without the protection of ropes, and this is the preferred hobby of famed climber Alex Honnold. This documentary from National Geographic accounts his multi-year journey toward being the first climber ever to free solo El Capitan, a 3,000-foot rock face in Yosemite National Park. Before his climb, Free Solo makes a great effort toward exploring the impossibility of his quest. Mere inches of sheer granite are Hannold’s only resources in climbing up the nearly ninety-degree formation, and as you would expect, his exhaustive planning and meticulous training do little to calm the stress of seeing him trying to accomplish his goal.

The severity of Honnold’s single-mindedness gives him a particular advantage in taking on such a challenge. Free Solo examines his life and his relationships, illustrating how the things not directly tied to his climbing tend to fall by the wayside. A girlfriend, named Sanni, is talked about pretty flippantly by Honnold, though she proves to be difficult for him to get rid of. Her insistence on emotional connection eventually wears him down, though he’s quick to mention it comes at the detriment of his climbing. Sustaining a relationship while preparing for such a death-defying stunt often leaves Sanni alienated, and Alex grumpy, and a cycle of resentment and forgiveness plays itself out several times before the film is over. Despite the hopes of those who love him, there is never a doubt as to if he will take on El Capitan – filled with micro-challenges deftly named things like “The Boulder Problem” and “Enduro Corner” – and this inevitability makes him a difficult person to love.

Also taken into account is the film crew, including Alex’s good friend (and one of the film’s directors) Jimmy Chin, who worry about incidentally filming a snuff film if he should fall to his death. The incorporation of Chen and Honnold’s other fellow climbers/cameramen give Free Solo a rather fascinating aspect: their presence adds weight to Alex’s journey, which in turn puts pressure on his attempt to complete something that seems impossible. Chen and co-director and Elizabeth Chai Vasarhelyi still pull off a stunning piece of filmmaking, filming the already suspenseful act and crafting it in a way that is truly cinematic. Chen and his cameramen, performing something that is dangerous in and of itself, really achieve a masterwork of documentary.

The person who seems least concerned with Alex’s death is Alex himself, who sees death as the worst-case scenario, but one worth taking the risk for. The ethic of Alex’s worldview – he says directly that performance and perfection are more important to him than happiness – is often called into question, by the film and often aloud by his mother and Sanni. Chen and co-director Elizabeth Chai Vasarhelyi so expertly delve into Alex’s obsessiveness and peculiarity, but do so without any hand-wringing or overt psychology. The death of friends from climbing seems to faze him very little, and the tears of loved ones seem to faze him even less. He pursues perfection, which is a necessity in what he’s trying to do. Free Solo, as a film, very nearly reaches that same perfection.