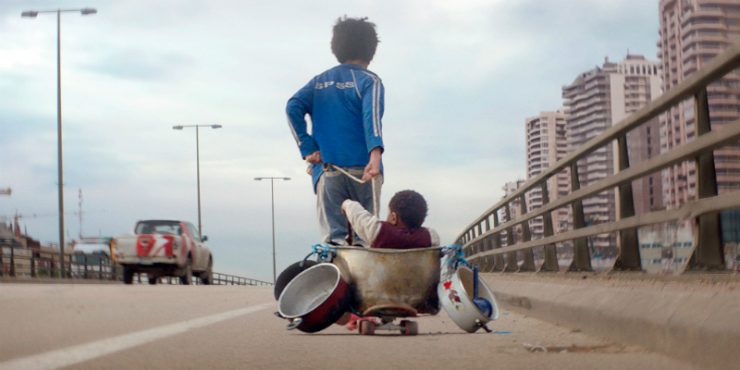 A film as harsh and hectic as Capernaum almost needs a child at its center, to remind the audience that there is still the possibility of innocence in a world that can be so filled with calamity. The child in Capernaum, though, has little innocence left to spare. His name is Zain (played by the young actor, Zain Al Rafeea), and he’s a boy living perpetually in survival mode, with parents who seem to care little for his future and well-being, and other adults who view him mostly opportunistically, if not with hostility. He lives in an impoverished village in Lebanon, where his parents have an endless array of children with little recourse to feed them. They live above a shop where the shopkeeper, named Assadd (Nour el Husseini) lets them live rent free in exchange for free labor from Zain, as well as something much more sinister.

Directed by Nadine Labaki, Capernaum‘s direct, docudrama style creates a severe immediacy between Zain and the audience, with the line between performance and reality almost imperceptible. The film is framed within a trial in which Zain is suing his parents for having him in the first place, for being so incredibly irresponsible with their procreation when they could hardly take care of themselves. At the start, we learn that Zain has been imprisoned – even at his age – for a crime, but that his lawsuit has garnered media attention. Labaki circles back to this trial while showing the journey that led him to it. His transport from scrappy rebel to courtroom plaintiff is colored by the vicious cycle of poverty, the ensnaring darkness of destitution that keeps him and his family from even considering a better life.

Zain’s fearlessness gives him little advantage in a dangerous world where he’s always a target, but his resourcefulness comes in handy when he chooses to abandon his thoughtless and abusive family. When he walks into a rundown carnival, he meets Rahil (Yordanos Shiferaw), an Ethiopian cleaning woman living illegally with her baby boy, Yonas. She must keep Yonas’ existence a secret for fear of losing him, so when Zain arrives asking for spare food, she decides to take him up as a babysitter. Rahil herself is in a desperate situation, in need of a new work permit that will prevent her from deportation. Her immigrant status presents all sorts of roadblocks to her attempts at keeping her head above water, and unlike Zain’s parents, she has a well of love and affection for her child and would hate to lose Yonas.

Zain’s travels throughout the underbelly of urban Lebanon is sobering, sometimes brutal. When Rahil is detained, Zain is left to fend from himself with a hungry baby. Labaki’s incredibly humanistic film is so frank and intelligent about his predicament, patient in the way it teases out the consequences of forcing him to take on such an adult role so early in his life. Zain Al Rafeea, playing the film’s main character, portrays the Zain’s precociousness, his level of wisdom despite his lack of education. When he is outraged after his family trades his beloved, 11-year-old sister to a man for a few chickens, it’s pretty shocking that Zain is the only person who sees the horror in that. Capernaum is smart enough to know that his harsh upbringing has allowed him to understand survival, without valorizing the things that have brought him to this point.

Capernaum can be a tough sit. Its 123-minute runtime moves stagnantly at times, and Labaki has an eye for dwelling on the most unattractive moments of Zain’s walk through hell. The film, recently nominated for a Foreign Language Oscar, has the essence of a “message film”, but Nabaki is too clever to ever bring in unneeded sentimentality. There’s a method to its seeming abrasiveness, a human understanding to so many inhuman moments. More than anything, Capernaum wants us to understand that children do comprehend the negative things that we expose them to, that they are not wiped clean by adolescence. There’s a system that can make a kid like Zain a criminal, and Labaki dissects that ruthless system with great precision.