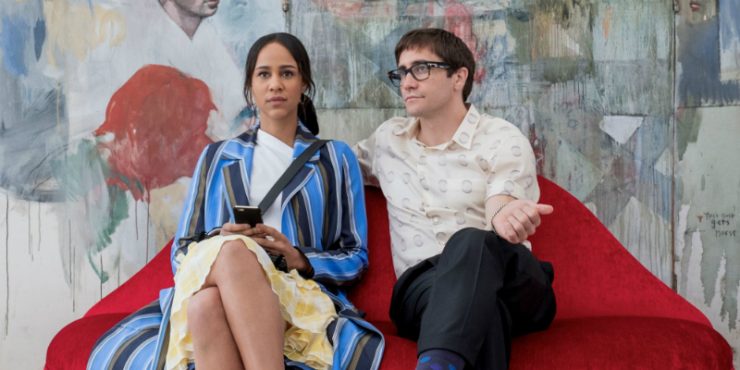 Velvet Buzzsaw is the kind of Los Angeles satire that has several of its characters die excruciating deaths, but the most emotionally devastating part is another character having to pack her bags and move back to Michigan. Its clever, often stupid, send-up of the corrupted contemporary art scene is more cynical than biting. It works much better as a comedy than a horror film. This is the third feature from writer-director Dan Gilroy, all of which have a preoccupation with Los Angeles’ more sinister undercurrents, but Velvet Buzzsaw is his least intriguing take: taking jabs at the consumption of art by commerce. Buzzsaw‘s script doesn’t have the fluidity of the films that it admires (namely, Altman’s The Player), but it does have an excellent ensemble cast that is willing to take Gilroy’s hysterical concept and deliver it at face-value.

Jake Gyllenhaal plays the extraordinarily named Morf Vandewalt, a notoriously acid-tongued art critic; Rene Russo is Rhodora Haze, a sharp, calculated gallery owner; Toni Colette is Gretchen, a platinum-blonde curator who’s never above intimidation; and Zawe Ashton is Josephina, Rhodora’s protegé who has ambitions of her own. These characters occasionally revolve around actual artists (played by John Malkovich and Daveed Diggs), but mostly throw around opaque concepts to conceal what they’re all really interested in: money. When an unknown man – we learn his name to be Ventril Dease – dies in the apartment above Josephina, she finds his artwork. His paintings are haunting canvasses filled with anguish and pain, and when Josephina releases them, the dead Dease becomes the hottest name in the art world.

The crux of the film turns on the fact that Dease himself was a dangerous man, and after his death, his paintings begin taking on supernatural powers and performing homicidal acts. The basis of Gilroy’s conceit – we consume art, but what if art consumes us – is a bit shaky, and as skilled a writer as Gilroy is, his touch for creative horror movie deaths feels a bit lacking. Gilroy is much better at establishing mood, which Buzzsaw has in gallons. The entire cast – particularly Colette and Gyllenhaal – seem to be having great fun here, performing several elements of the art industry with the kind of abandon that cares little for how broad the satire actually is. Gilroy’s ‘campy Michael Mann’ mood is something I happen to respond to, even when the result is something as hilariously flat as Buzzsaw. His affection for the notorious LA always peaks through, past the blatant observations of vanity and cruelty. It still beats that plane home to Michigan.

Written and Directed by Dan Gilroy