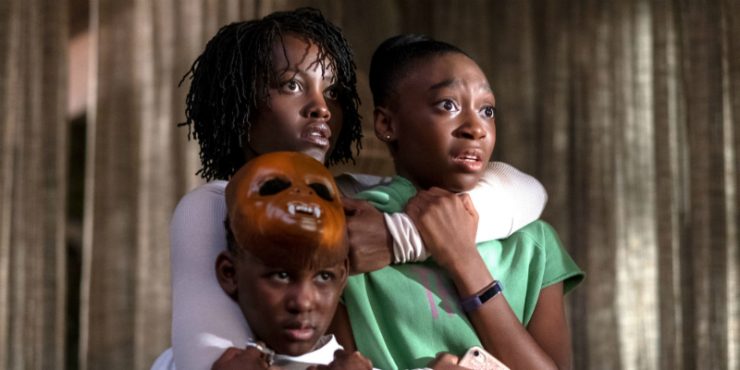 The ideas that Jordan Peele has brought to the screen in his first two features could be comedies, if they were twisted that way. Anyway, you can see how the man who created them was part of a successful sketch comedy show. What Get Out and his latest film, Us, prove is that there isn’t a huge amount of difference between horror and comedy; not in films and not in life. There was something revolutionary in Get Out. The way it spoke about black and white racial paranoia felt radically different from the kind of reconciliatory message films we usually get about the subject. Even if I found it plodding as it straddled the line between genres, I could not deny the originality. Us attempts to be a continuation on that attitude, a reconfiguration of how race can be captured on the screen.

Lupita Nyong’o is the film’s star. It seems plainly criminal that it took five years since her Oscar for Twelve Years a Slave for her to get a chance to open a movie, to stand head and shoulders as the film’s main attraction. No longer playing background music like in Black Panther or the latest Star Wars trilogy, Us proves that Nyong’o is a star, an actress talented enough and famous enough to take a movie to $100 million (which it did in its second week of release). Nyong’o plays Adelaide, a former dancer, who accompanies her family on a lake house vacation near Santa Cruz. The boardwalk on the Santa Cruz beach holds a haunting, traumatic memory from Adelaide’s childhood. Getting separated from her parents as a child, Adelaide ended up in a hall of mirrors, where she saw things that she would never forget.

Decades later, Adelaide’s husband Gabe (Winston Duke) convinces her to return to the beach, unfamiliar with her past. Gabe thinks the beach would be fun for their children, teenaged Zora (Shahadi Wright Joseph) and young Jason (Evan Alex). They also get to meet up with Gabe’s obnoxious friend Josh (Tim Heidecker) and his pushy wife, Kitty (Elisabeth Moss), who also have a pair of children. Uneasy, Adelaide tries to convince Gabe that they should leave, but it all becomes moot when they are visited by a strange, dangerous group of people. Furthermore, these scissor-wielding intruders look exactly like them. Trapped inside the lake house with their terrifying doppelgangers, Adelaide must confront the horror of her childhood, and admit that she knows more than she’s letting on.

Us‘s premise expands much further then I think anyone could have predicted, thematically tying in things as varied as twenty-first century family dynamics and the Hands Across America movement from the 1980s. It’s obvious that Jordan Peele has an almost preternatural understanding of metaphor, but much like Get Out, Us seems to have trouble moving past that and incorporating it into a functioning story arc. Us is much more horror than Get Out ever tried to be, but while it avoids the previous film’s genre confusion, it lacks the clarity. By the film’s conclusion, we are seated to an elongated removal of the Scooby-Doo villain’s mask, which ends in a way that smacks of faulty, Shyamalan-ian twist-making. The movie spends more time having to explain itself then it does actually telling its story.

Despite all this, Us is already a hit and I hope that it means Peele will get ample opportunity to make something better. His competence as a film director is undeniable (his attuned, confident shot-making and editing is just as much of a treat here as it was in Get Out, and proves how much of a master he is in creating tension), as is his ability to coax good performances. He made Daniel Kaluuya a star with Get Out and confirmed Nyong’o’s stardom with Us. I would like to see him create real characters, though, that could exist both outside and within his lofty ideas. Masking the rhetoric of race within the constructs of horror is a genre that Peele has created. I’m just not sure he’s perfected it quite yet.

Written and Directed by Jordan Peele