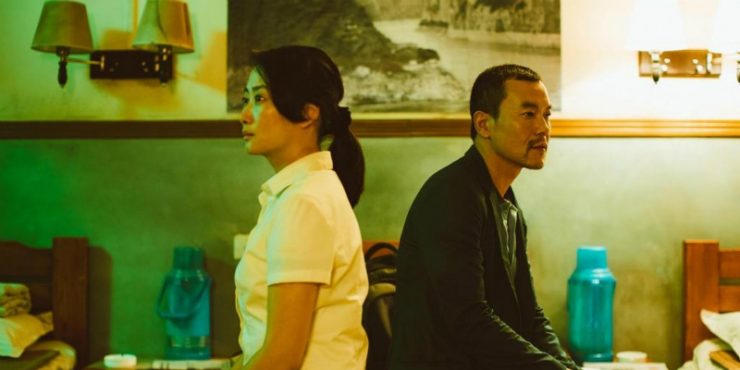 Violence and romance pulse throughout Ash is Purest White, the latest from A Touch of Sin director Jia Zhangke. Zhao Tao plays Qiao, a young woman in love with a gangster named Bin (Liao Fan). Bin, an intense but principled crime lord treats Qiao as more than a trophy; her equal parts fear and respect for his business makes her the perfect woman to be by his side. When rival gangs cause trouble in an attempt to overtake Bin’s stronghold, Qiao makes a decision to protect him that forever changes their relationship. White‘s arc covers nearly two decades, a testament to Qiao and Bin’s ability to keep finding one another, and furthermore, to keep losing one another. Jia frames their love story around scenes of political unrest, as Chinese laborers protest against the specter of automation. How these two ideas play off one another is one of many things I was never quite sure about.

White burns slowly, meandering for long stretches in ways that make it very difficult to know what Jia and the film is contemplating. The film’s first forty-five minutes seems to intentionally promise a film that Jia knows will not exist for the subsequent hour and a half. There are certainly breathtaking moments, such as a performance by a pair of ballroom dancers as well as an expertly choreographed fight sequence in the middle of a time square, but after that the film seems to go out of its way to avoid excitement. As Qiao, Zhao Tao is phenomenal, displaying her character’s heartbreak and dedication, but the movie never seems to justify her hard work. Jia’s film seems too caught up in abstractions and allusions to historical injustice, that neither the straight story, nor the story within it, seems to really shine.

Written and Directed by Jia Zhangke