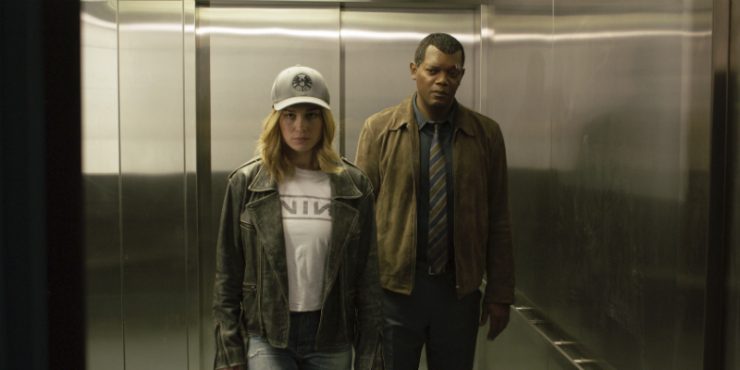 Waiting this long to reveal a character as powerful as Carol Danvers could be seen as shrewd. Plenty of people have been clamoring for a woman-led superhero movie since as long as I can remember, but it wasn’t until the Marvel Cinematic Universe was dealt a massive blow in morale and personnel by the end of Infinity War that something actually came of it. That blow may have been lessened had we seen what Danvers – and her eventual incarnation as Captain Marvel – is capable of doing. And so it is in 2019, over a decade since the MCU began with 2008’s Iron Man, that we finally get a superhero film led by a woman. Captain Marvel has the charm and talent for understanding the significance of its existence without getting too weighed down by it, though it is still anchored by its superhero-origin-storytelling, which brings nothing new to the table.

Danvers is played by Brie Larson in an actor/role fit so seamless that I never would have predicted. Danvers is a member of the Space Force within the Kree Empire (who call her, simply, ‘Vers’) and has no memory of her human time on Earth. Trained by Yon-Rogg (Jude Law), she is often counseled against seeking out the mysteries of her past which will only stunt her evolution as a Space Force warrior. She is plagued by nightmares that detail a plane crash and the involvement of a woman (Annette Bening) whose significance she can’t quite place. The Kree are seeking to stop the Skrulls, a shapeshifting alien race hell-bent on finding light-speed technology. In the hands of the Skrull, this technology could make the Kree vulnerable to invasion, and the Space Force must stop them.

After a dust-up with a Skrull group led by Talos (a wonderfully charming and frighteningly green Ben Mendelsohn), Danvers ends up back on Earth, crashing through the ceiling of a California Blockbuster in 1995. Followed by Talos, tracked by Yon-Rogg, and peaking the interest of Earthling and S.H.I.E.L.D. agent Nick Fury (as always, Samuel L. Jackson, but equipped with an age-defying hair piece), Danvers finds herself a person of interest for several different species. Aided by Fury, Danvers begins to find concrete answers about her past, including her time in the Air Force, and her work with Dr. Wendy Lawson (Bening) who was designing the light-speed technology the Skrull desperately seek. She also learns about Maria (Lashana Lynch), her former best friend and fellow Air Force pilot. As the pieces come together, she finds her relationship with the Kree and the Skrulls to be more complicated than she imagined.

Captain Marvel‘s screenplay structure is interesting, allowing her to learn her own origins at the same time that we do. For a large portion of the film, she is scrambling to learn just who is okay to trust, and likewise, the audience is often diverted one way only to learn answers are sitting in front of us. The script is written by the film’s directors, Anna Boden and Ryan Fleck, along with Geneva Robertson-Dworet. Tapping Boden and Fleck for directing feels equal parts promising and short-sighted. Usually helming smaller, character-oriented independent productions like Half-Nelson and Mississippi Grind, the filmmaking couple isn’t exactly the first choice for the usual Marvel big-budget gluttony. What they lack in major Hollywood filmmaking, they seem to make up for in 90’s appreciation, giving credence to beloveds like Nirvana, the two-cassette VHS copy of The Right Stuff and the aforementioned Annette Bening.

Boden and Fleck handle themselves well in their construction of film’s action set pieces, even if it does seem at this point that all of these movies sort of direct themselves, considering the formal similarities that the entire MCU seems to share. The fight scenes, built so often upon one character’s unstoppable power being bested opportunely by another character’s unstoppable power, seem to move along as if this isn’t the reason people are coming to the theater. And perhaps that’s correct. Their overarching battle sequences are starting more and more to feel like burdensome obligations, and Captain Marvel is no exception. While more times than not, the MCU’s greatest scenes are the ones in which their collection of Avengers simply interact with each other, and character interaction is a calling card of Boden and Fleck’s other (better) movies.

Luckily Captain Marvel has Brie Larson, an actor who seems to savor the chance to take on a role this big. After winning the Oscar for 2015’s Room, Larson has mostly stayed away from the potential of movie stardom, which belies just how good she is as Carol Danvers, playing up the part’s cheekiness without sacrificing the awesomeness of her power. Aside Samuel L. Jackson, Larson strikes a delightful chemistry, creating the foundation of a buddy comedy that could have sustained the entire film. Captain Marvel feels retrofitted, at times, to cash in on contemporary feelings about gender and displacement, but Larson has a strong handle on the subject matter, and is able to make it something honest, and truly entertaining. For the first time since Downey Jr. originally donned the Iron Man suit, a Marvel film is spearheaded by its lead performance.

**SPOILER ALERT** Carol Danvers ends the film by embracing her role as Captain Marvel, a supremely powerful superhero who is ready to take on all the challenges that the universe has to offer. Essentially, she’s the perfect person to take on Thanos and his notorious finger snap. Good thing she didn’t disintegrate. I would have liked a little more breathing room between Captain Marvel and The Avengers: End Game. As it stands, the rushed placement has Captain Marvel feeling more like a narrative stepping stone, as opposed to a unique development in the comic book movie genre. There are things about Captain Marvel that are grating (its 90s nostalgia felt overbearing and occasionally embarrassing), but the best blockbusters are often also great movie star vehicles, and Larson is more than happy to deliver.