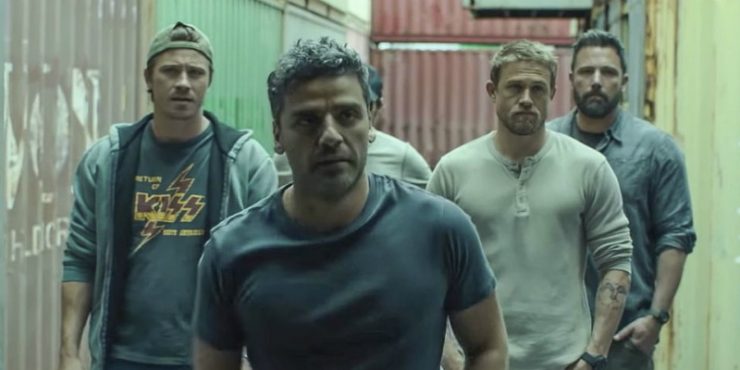 All four of J.C. Chandor’s feature films have come this decade, and they’re a kaleidoscopic display of a young filmmaker’s talents. Margin Call was a stripped-down talkathon about the financial crisis, while All is Lost is a one-man-show featuring Robert Redford on a sinking boat doing all he can to survive (except talking). 2014’s A Most Violent Year felt like a wonderful coronation, a pinnacle for Chandor and his brilliant two stars (Oscar Isaac and Jessica Chastain). Since then, I have seen little to confirm the wonderful promise that A Most Violent Year suggested, from any of the three of them. So now, Netflix releases Triple Frontier, Chandor’s big-budget, star-filled action romp. It reunites Chandor with Isaac, but otherwise contains none of their first collaboration’s cerebral flair for narrative suspense or character exploration.

The film is based on a story idea from Oscar-winner Mark Boal (The Hurt Locker, Zero Dark Thirty), and Boal shares the screenwriting credit with Chandor. The script seems to resemble very little of Boal’s usual decree of “cinema as journalism”, nor does it jibe with Chandor’s usual moral compass. Frontier is about a group of military warriors turned mercenaries who decide to rip off a Columbian drug king. Convinced by Santiago (Isaac), the team is convinced that they’ll be able to secure $75 million from a drug dealer’s well-guarded fortress, and take down the king himself in the process. Their plan is dangerous, but more so, it’s naive. These men, disappointed by a country who has given them little for their sacrifice, overstate their abilities as they get older, and they also exaggerate their own sense of ethics, unaware of how they’ll react when they re-enter open combat.

Santiago’s team includes Ironhead (Charlie Hunnam), who takes a break giving pep talks to returning veterans to join him, as well as Ironhead’s little brother Ben (Garrett Hedlund), a mixed martial artist. In need of a pilot, he recruits Catfish (Pedro Pascal), whose recent bust for cocaine use makes a trip to South America hard to pass up, but he also looks up Redfly (Ben Affleck) their former captain. Retired and selling Condos, Redfly is very hesitant to join the job, fearing a downward spiral back into the life of being a killing machine, and away from his teenaged daughter. But Santiago knows just the right words to convince him, bringing the crew back together again. The plan, which calls for stealth and efficiency, is meant to limit mortalities and enhance financial profit. It quickly dissolves into a bloodbath.

Santiago, who has spent years in South American jungles trying to fish out this particular crime lord and his ring of influence, becomes blinded by what he thinks he can achieve. His overconfidence spills over to the rest of the men, who take his lead and follow him into a situation that is somewhere between Three Kings and The Treasure of the Sierra Madre. Those films, both exceptional, had a strong grip on their characters, and why their greed and hubris was their undoing. Triple Frontier is not so sure. The film constantly contradicts itself, with the men displaying a high capacity to commit mass atrocities, followed by somber, apologetic self-reflection. Santiago, Redfly and his men have no problem proclaiming the things they’ve done, but have an almost innate sense of neutralizing accountability. I couldn’t get past how truly horrific these men are.

For all of Mark Boal’s commitments to exposing harsher truths, it seems like – particularly after this film and 2017’s Detroit – he uses that manifesto to mask a kind of sadism. Much like The Hurt Locker, Triple Frontier nearly valorizes the monstrous ways in which our military accomplishes its goals. The teeth get sharpest when talking about the institutions that abandon soldiers after morphing them into killing machines, but has little argument against its characters who frequently equivocate when they commit mass slaughter. Unlike The Hurt Locker, Triple Frontier is unwilling to have that uncomfortable conversation about what these men’s behavior means. Instead, the film is much too comfortable with frequent killings of South American peoples who are given little to no lines of dialogue.

I couldn’t help but wonder if Triple Frontier was some kind of make-up for Chandor getting fired from what was meant to be his original foray into broader Hollywood fare, Deepwater Horizon, in 2015. Both films seem to satisfy a need to address major sociological problems with the least amount of effort. As it stands, Frontier wastes a perfectly adequate performance from Oscar Isaac, and perhaps stacks the deck a bit too high by casting Ben Affleck as a character with much more complexity than Affleck has ever been capable of delivering. It’s hard to watch this film and come to any conclusions as to what the film wants to be. Fun? Cynical? A rah-rah testament dedicated to the bravery of our armed servicemen? The movie tries to cover all of that territory, but fails on all fronts.