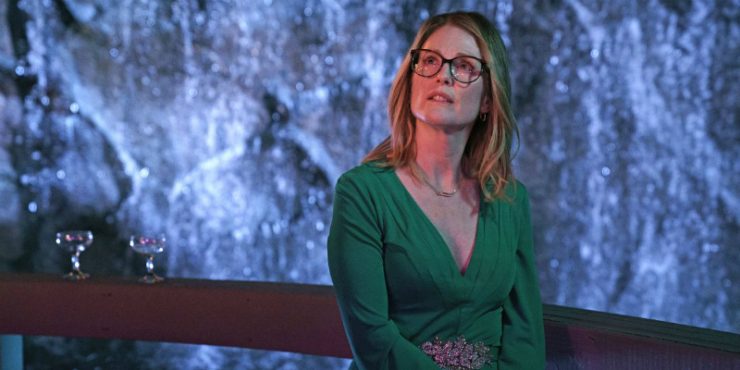 As far as remakes go, Gloria Bell is amongst the best that I’ve seen in a long while. It helps to have Julianna Moore – perhaps the best screen actor of her generation – and it also helps to bring in Sebastián Lelio, the director of Gloria, the 2013 Chilean film on which Gloria Bell is based on. Gloria felt like a miracle the first time I had seen it earlier this decade. Five years later, Gloria Bell also feels miraculous, if only because these kinds of stories simply don’t get told often in American films. Moore plays the titular Gloria, a divorced woman in her 50s who perhaps dotes on her children a bit too much and has a habit of going to advanced age dance clubs where she can mingle, frills-free, with people her age. Her main vice is dancing, but she is not opposed to meeting a man

Bell‘s main plot line is Gloria’s relationship with Arnold (John Turturro), a sweet but complicated theme park owner, who just recently divorced a toxic woman but can’t seem to find the strength to fully separate from her dependency – or the dependency of his two adult daughters. Arnold’s weaknesses and insecurities don’t exactly make him a perfect catch, but Gloria finds herself drawn towards his sensitivity, and his adoration. Gloria has two adult children of her own; there’s Peter (Michael Cera), a new father whose wife has abandoned him with the baby, and Anne (Caren Pistorius), a yoga instructor who’s started a serious romance with a Swedish big-wave-hunter. As their lives turn away from her, she searches to fill the void. Some days she does better than others.

Over fifty, Gloria seems preoccupied only with happiness; her own but also of her family and friends. Her generosity occasionally leaves her vulnerable to the whims and abuses of those around her, which she chooses to work through, including her children’s indifference and Arnold’s petulance. Her empathy even extends towards a faceless upstairs neighbor, who lives in a perpetual state of breakdown, having shouting matches with himself and frequently leaving his cat out, free to roam into Gloria’s apartment. She feels helpless in the face of her neighbor’s despair, of which she can do very little. The same goes for Arnold, whose multitude of sensitivities leave Gloria to carry the emotional burden. So ready and willing to accept his love, Arnold can’t stop himself from being tugged back into the torturous situation that he just escaped.

Chilean filmmaker Sebastián Lelio is already one of the great masters of contemporary films, with a specifically keen eye for female characters so often underrepresented in the movies. A Fantastic Woman and Disobedience were two sober, but spirited films about queer women and how they attempt to function within various cultures of oppression. But the original Gloria may be his masterpiece, which caused me great conflict when considering Gloria Bell. Starring Paulina García, the 2013 film was a stunning, bare portrait of passion and romance. García’s perseverance in the face of her life’s many foibles was spirited and inspiring. The 2019 film is much more sullen, more concerned. There’s less a sense that Moore’s Gloria has a complete sense of control. And yet, Lelio still finds the room to surprise.

The level of adaptation is fascinating, keeping most if not all of the original script’s plot points, while still transitioning the film away from the luscious climates of South America and into the stunted, textile-d flatness of Southern California. Added is a lush score from Matthew Herbert, which adds a level of gravity to Gloria’s melancholy, as well as her capacity (and ours) to experience the small beauties of her life. Lelio admires Gloria’s sense of wonder and exploration, her refusal to cease having new experiences. He never sets her up as naive, in fact finds a lot of wisdom in the ways she views the world. Bell has more room for somber reflection, even if it does telegraph its meanings with more declaratively then its predecessor.

Moore, a peerless performer, plays Gloria with her usual mix of fierce honestly and blunt melancholy. The role seems to lean into the strengths of Moore’s phenomenal career, shaped by various women who must learn about themselves when facing a crisis. We’re a few years removed from her Oscar win for Still Alice, where she played a woman derailed by Alzheimer’s, a strong but mannered piece of acting shoved deep into a flagrant melodrama. Gloria Bell is a much more complete character, stands more sturdily with the better performances of her career (Magnolia, Far From Heaven, [Safe]). This is the kind of film and performance that should have garnered her the career achievement Oscar. It’s telling that it instead becomes another example of her modest brilliance. Another portrait of a woman too extraordinary to ignore.