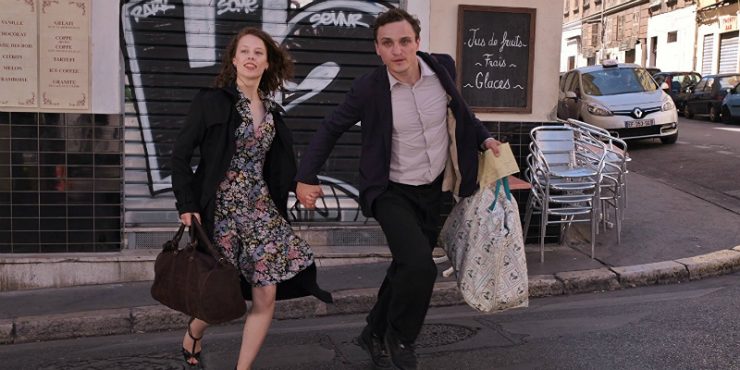 The last three films from Christian Petzold have examined the existential crisis of Germany in different forms. In Barbara, Nina Hoss plays a physician trapped behind the Iron Curtain in East Germany. In Phoenix, Hoss plays a singer and Holocaust survivor in post-WWII Germany, trying to find her husband after facial reconstruction surgery. In both films, deception is a major key in the plot’s construction, lies being the ultimate prerequisite for survival in an oppressive police state. His latest film, Transit, covers similar ground, creating an unofficial trilogy of love floundering under the fierce stranglehold of a fascist state.

The film is based on a novel by Anna Seghers, written in 1942 about World War II. It involves a young man who has escaped a Nazi concentration camp and is searching for a visa to flee Europe. Petzold’s film, while keeping the language and behavior consistent with a WWII drama, makes the setting contemporary instead of period. The effect is certainly disorienting (particularly for me, who had no clue about this idiosyncratic detail), but eventually becomes the film’s catalyst: it forces you to consider the possibilities of our worldwide political strife, creating the horror of a contemporary fascist takeover.

Franz Rogowski plays Georg, a runaway living in France frantically trying to get himself on passage out of Europe. In occupied Paris, he’s asked to deliver letters to a known Communist writer, only to find the writer has committed suicide. Traveling to Marseille with the writer’s belongings, he unwittingly finds himself assuming the writer’s identity, which comes with a boat ticket set for Mexico where he can restart his life without fear of arrest. As he waits for his ship to sail, he makes some friends, including a young boy, Driss (Lilien Batman) and his deaf mother (Maryam Zaree). Driss’ father died trying to reach Marseille, and Georg does his best to comfort them, even if his stay is limited.

When Driss gets sick, he also meets a doctor named Richard (Godehard Giese), a pediatrician who’s also got plans to leave Europe and the oncoming occupation. Richard has someone he is leaving behind too, a woman named Marie (Paula Beer), a striking beauty whom Georg has already seen in passing throughout Marseille. She is desperate to find her husband, a man she left behind years before, but hopes to reconcile with before leaving Europe. It does not take long for Georg to realize that her husband is the very writer who’s identity he has assumed.

Like Phoenix, Petzold’s Transit script is filled with tension and irony, with one character secretly knowing personal details about the others and letting that secret unfold into further complication. Unlike Phoenix, Petzold refuses to ground his story in a specific historical context. Using modern dress, contemporary cars – and more shrewdly, a voiceover narrator who’s identity is unknown for a majority of the film – Petzold keeps the audience off-balance, further helped by being in Marseilles, where the provincial architecture and spartan dwellings recall even a different period.

Transit certainly works as a drama. Rogowski’s Georg is tormented, at first motivated solely by survival and then by love, while Beer’s Marie is romantic and naïve, perfectly willing to have affairs with Richard and Georg, while anticipating a reconciliation with her husband. The mix is perfect for a doomed romance, a love blooming from tragedy that has little soil to grow. But the brilliance of the film is how the love story is foregrounded against the backdrop of an oppressive police state. The effect is remarkable, a complete reorientation to how we deal with fascist narratives in movies. Transit has no interest in history, but it does have a vested interest in stopping history from repeating itself.

Written for the Screen and Directed by Christian Petzold