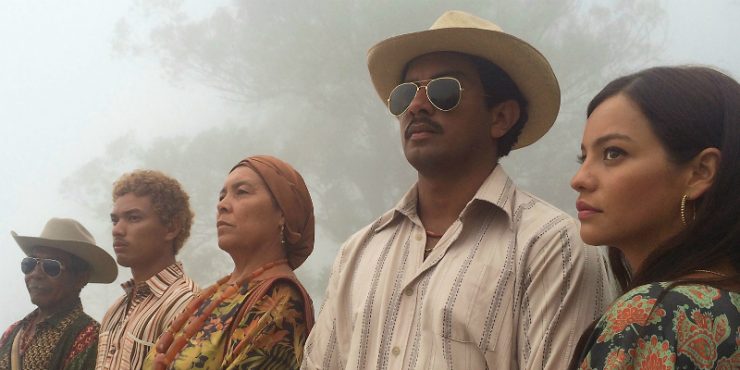 You’d think the well had dried when it came to making unique films about the dangerous Latin American drug trade, but then you see a film like Birds of Passage, and it’s revealed how the real story is seldom told. Directors Christina Gallego and Ciro Guerra have no interest in what we’ve already been told, tales of American greed brought face-to-face with the barbarity of Hispanic criminality. The film instead takes place in the windswept deserts of Columbia, where an indigenous tribe of Wayuu is introduced to the drug trade in the early 70’s. Living their lives in fear of spirits and tradition, things begin to rot when money from marijuana sales bring decadence and corruption. Hardly about addiction, Birds of Passage instead becomes a brutal, violent meditation on the cruelty of capitalism, and its ability to pervert even the most honorable of cultures.

José Acosta plays Rapayet, a young, striving member of the Wayuu tribe led by Úrsula (Carmiña Martínez). When Úrsula’s daughter, Zaida (Natalia Reyes), is ceremoniously revealed to the village after a year of isolation, Rapayet decides to make an offer of marriage. The offer is bartered by Rapayet’s uncle, Peregrino (Jose Vicente Cote), who appeals to Úrsula’s pride and sells an image of prosperity that Rapayet can bring to both of their families. Úrsula accepts, but asks a near-impossible dowry in exchange for her daughter’s hand. Undeterred, Rapayet takes the unchartered step of teaming up with an outsider – or alijuna – named Moisés (Jhon Narváez), to start selling marijuana to visiting American Peace Corps students. To get the product, they decide to visit Rapayet’s cousin, Aníbal (Juan Batista), whose fields can produce the needed marijuana.

What begins as a venture to make money off of visiting gringos soon morphs into an enterprise with hundreds of employees, tons of marijuana and voracious amounts of firearms. As the money stacks higher and higher, Rapayet finds more and more trouble controlling the greed that grips those around him. Partners come and go, are killed or flee. Compensations are frequently being passed back and forth as the two sides of the Wayuu lose trust in one another’s word. Ahead of all of this is Úrsula, whose fear of losing control of her village affects her judgment and puts her at odds with Rapayet, her daughter Zaida, and even at times, her own grandchildren. Motivated more by power than money or drugs, Úrsula becomes ruthless, the most dangerous piece in Rapayet’s whirring business venture.

Birds of Passage‘s violence is direct but impersonal. More often than not, we see the aftermath of slaughters or people are shot off screen. Its propensity to emphasize the coldness of these drug murders works to great effect. Rapayet is a man who only wishes to better his family, who wishes to avoid war at all cost. His naiveté prevents him from seeing that the drug trade and war are perpetual things, there is no such thing as one without the other. Every time he believes he has paid penance for the sins of his colleagues, another bad seed ends up taking its place, putting his entire life in peril. His choice to embrace opulence and monetary security goes against the teachings of Wayuu philosophy, but he either unwittingly or forcefully ignores how it will distort his reality. Drugs is a bloody business, and very early on he realizes that its a blood that never totally washes off.

It’s vitally important in Birds of Passage that it is completely from the point-of-view of Wayuu people. There is outside influence – plenty of alijunas who have their say in the proceedings – but the fates that befalls the family of Úrsula, Rapayet and Aníbal are ones almost completely of their own making. Gallego and Guerra are telling stories of abusive systems, and how they only empower abusive people to gain more power. Rapayet’s preference toward reason means nothing in the face of greed, which poisons the logic, and even in some cases the morality, of those around him. Despite the beauty of its precise filmmaking (cinematography by David Gallefo; editing by Miguel Schverdfinger), its substance is harrowing. And yet, there is something particularly refreshing about its methods, the purity of its characters and their motivations – how it pressures the audience to accept the stark reality of life for indigenous people in this world.

This is a tremendous film, unlike anything else currently in theaters. It made the shortlist for the Oscars’ Best Foreign Language Film but missed the cut when nominations were announced. All’s well, though. It’s themes seem a bit too sticky for any institution like the Academy to parse. It pushes the notion that the solutions to these problems are going to require a lot more effort than is currently being given.