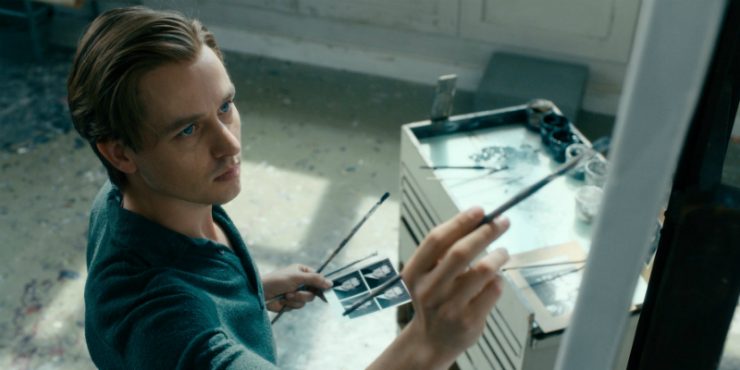 The story of Germany’s Twentieth Century is impossible to encompass in a single film, but Never Look Away certainly does try. Through the prism of art and the purity of expression, the latest film from Florian Henckel von Donnersmark (The Lives of Others) is a grand piece of work, a three-hour-plus immersion in the tumultuous German period between the rise of the Third Reich and the initial construction of the Berlin Wall. Never Look Away examines a nation at war with itself and its ideals, struggling greatly as the biggest loser of both world wars. Its humiliations and vulnerabilities are pressed through the story of an artist, his wife and the wife’s doctor father.

Kurt Barnert (Tom Schilling) grew up in Dresden, but his family moved out into the country just before it was bombed into oblivion during the Second World War. Seeking survival, Barnert’s family joined the Nazi party, but that didn’t stop the government from seizing his beloved aunt, Elisabeth (Saskia Rosendahl), for mental instability. Otherwise, the Barnerts escape the war unharmed, but find their necessary Nazi affiliations a major detriment when trying to reintegrate after the war. It is up to Kurt to succeed in his family’s shame. In art school, he meets a fashion student, also named Elisabeth (Paula Beer), but asks to call her Ellie. They fall instantly into a passionate romance, that brings him into her home with her parents.

Ellie’s father, Carl Seeband (Sebastian Koch), is a professor of gynecology who was an honorary member of the SS who manages to stave off post-war Nazi exclusion after a moment of sheer luck and hardened skill. Hiding in plain sight, his position within the Third Reich’s horrid eugenics practices is buried deep underneath an outward display of affection for the GDR. When he learns of Ellie’s relationship with Kurt, his horrid prejudices rear their head, and he begins to fear that the young man’s inferior genetics will infect his family line. The shocking lengths he goes to in order to keep them apart is vile and fueled by a guilty conscience and paranoia. As East Germany tries to build itself behind the Iron Curtain, Kurt tries to maintain truth in his art and in his marriage.

The script is said to be based on the life of renowned German artist Gerhard Richter (who, it should be said has called the film “abuse” and said his actual history was “grossly distort[ed]”), though I am not sure how much that connection really matters in terms of the film’s success. What Never Look Away does, perhaps more than any other film that I’ve seen, is truly visualize the majesty of artistic mastery and creative achievement. Shot by Caleb Deschanel, Never Look Away is a film riveted by light and shadows, the ways in which paintings themselves reflect upon the audience. Its specific interest in the actual act of painting, the physical movement of the brush against the canvas, is breathtaking to behold. Spurred on by Max Richter’s invigorating score, Donnersmark makes the painting scenes come alive.

Donnersmark in many other ways maximizes his skill of cinematic language, leaving few scenes before exploiting the highest emotional impact. His first film, The Lives of Others, won an Oscar and was a masterwork of melodrama that fit perfectly into the devices of Hollywood genre. Never Look Away is a slipperier film, a titanic operation juggling multiple genres at once. At times a sweeping romantic epic, at other times a bracing WWII/Cold War procedural thriller, by its third hour it becomes a rapturous discussion on the place of art in society – motivated greatly by Oliver Masucci who plays Kurt’s art professor in West Germany. The full picture, much like Karl’s artwork, leads to something haunting, but strikingly beautiful, concluding Kurt and Carl’s relationship with thunderous feeling.

I have many questions about Donnersmark’s film, especially as it pertains to the ethics of mining the harrowing history of a man (Richter) who didn’t want to be a movie. It was recently nominated for the Best Foreign Language Film Oscar (as well as for Deschanel’s cinematography), which makes sense considering the film’s old-fashioned approach to historical storytelling. The apparent exploitation of Richter spoils the experience a bit for me, but I must admit to being completely enraptured by its direct, unsubtle storytelling, and the bluntness of its filmmaking. Never Look Away is a film about the truth behind a piece of art, which may turn out to be more sinister than you’d expect.