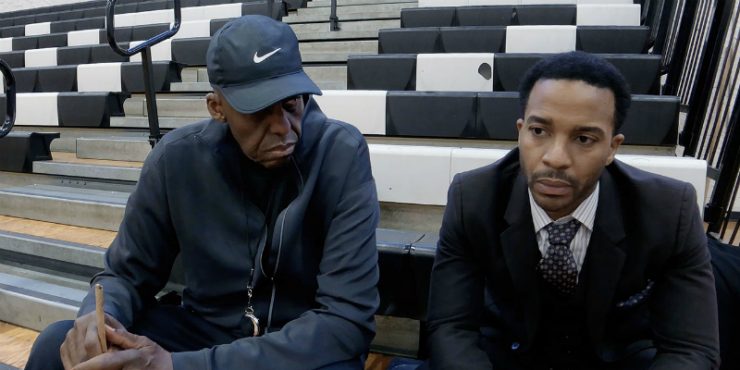 Chief among the charms of Steven Soderbergh is that it is never explicitly clear what even he wants from his career. He eschewed indie darling status (sex, lies and videotape) for Oscar-winning prestige (Traffic, Erin Brockovich), cashed in with Hollywood spectacle (Ocean’s Eleven) and low budget, high-camp thrillers (The Informant!, Side Effects), retired to become a painter, only to reemerge almost immediately to direct movies on iPhones. He’s never seemed comfortable on any particular path, and for a person who publicly declared he didn’t want to direct any more movies, it seems the only time he is comfortable is when he’s sitting in the director’s chair. Because of his prolific energy, and stripped-down shooting style, it’s very easy for any one of his movies to feel turn-key and tossed off, but his latest film, High Flying Bird, proves he is still one of the most unique cinematic voices we have.

Bird is written by Tarrell Alvin McCraney, most famous for writing the original play that became Barry Jenkins’ Moonlight. Here, McCraney tackles the world of professional basketball, but does so without including a single game of basketball in the script. Instead, he focuses on “the game on top of the game”, in which a sport perpetuated by the skill and cultural influence of black athletes is empirically controlled by the whims of rich, white owners and patrons. Andre Holland (also from Moonlight, as well as The Knick, a TV series directed by Soderbergh) plays Ray Burke, a veteran sports agent who looks to take care of his basketball clients in the midst of a lockout. His most precious player – a recent number one overall pick, Erick Scott (Melvin Gregg) – was drafted by New York (official team names and likenesses are shrewdly avoided at every chance), but gets no salary until the owners and players’ union can come to agreement and get the games started.

Erick is eager to prove his worth, frustrated by his lack of control. Ray tries to keep him out of trouble, from taking bad loans or starting beef on Twitter, but as negotiations protract, Ray finds everything harder to fix. His assistant, Sam (Zazie Beetz), tells him that their agency has moved her to another agent, and his boss (Zachary Quinto), explains to him that without an active basketball season, his position is becoming increasingly redundant. He turns to an old friend and mentor, Spence (Bill Duke), who can only remind Ray of the institutional road blocks professional sports has put in the way of black men. He reaches out to the head of the players’ union (Sonya Sohn) who has nothing but resentment and pessimism. He also runs into David Seton (Kyle MacLachlan), a major member of the owners’ group, with a pasted on grin whose massive wealth presents no troubles with sweating out anxious players like Erick Scott.

The foundation of High Flying Bird revolves around how much the audience and the characters in the film, view Ray Burke. In Holland’s performance, Ray is a confident but weary smooth-talker, an old dog worker with new dog charm who can work between generations. He is not uncomfortable in dire straights. Soderbergh (who also shot and edited the film) crafts Bird into a brisk, 90-minute procedural, and turns McCraney’s info-heavy script into a number of Sorkinian, walking-and-talking dialogues with power dynamics that toggle back and forth violently. In his previous film, last year’s Unsane, Soderbergh took a trashy short film concept and stretched it excruciatingly over a feature-length movie. With Bird, Soderbergh is shrinking everything that McCraney is trying to say into its essence. What we get is a pure film about the oncoming movement of player power in professional sports – a trend particularly prevalent in the NBA.

There are a lot of corners cut in High Flying Bird. When you watch and realize there isn’t a second of legitimate basketball, or even a smidge of a team logo or jersey, the limits of Soderbergh’s costs-saving measures become incredibly apparent. You may wonder if Bird would have gotten the content it needed if it was directed by someone more patient, someone who could resist shooting for a day to get more money. But then you would have something much different than what we have, which is a truly original sports movie that lends credence to the idea that behind-the-scenes transactions have overtaken on-the-court action in the audience’s mind. The point of Ray’s scheming is to use the sensationalist culture to reignite a love for the game itself – and, of course, get his clients paid – in a way that maximizes the player’s power. In that way, McCraney’s script and the film it becomes can moralize. It’s Soderbergh’s schlock-y style that gives it a much-needed edge.