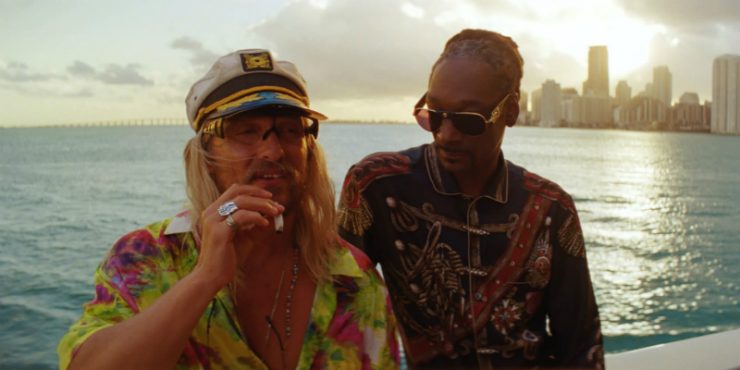 A film as wondrously joyous as The Beach Bum should not be taken lightly. Its unhinged enthusiasm and complete embrace of its absurd premise helps you to tolerate its overindulgence. Though it’s probably more accurate to say that the overindulgence is the point. Matthew McConaughey plays Moondog, a hard-living poet who wanders the vivid streets of the Florida Keys with shaggy hair and loose-fitting clothing, often finding creative ways to put his feet up. He’s consistently surrounded by various men and women who love his childish abandon and his crude lyricism, and his entire existence is the practice of extreme hedonism and a complete disregard of impulse control. Writer-director Harmony Korine does an astonishing job of keeping The Beach Bum deep within its protagonist’s state of mind, constructing a reality out of Moondog’s exuberant fantasy.

When we meet Moodog, he’s stumbling through numerous bars where he’s met with immediate applause. Interrupting a performer to deliver one of his patented poems, it’s obvious the kind of staple that Moondog has become in these haunts. A hero for misfits and artists alike, the people’s love for him seems to stem from his complete honesty with himself. The transparency of his personality leaves little to think about, but plenty to admire. What you see is what you get. Now, this doesn’t exactly make him the greatest father or husband. When his wife, Minnie (Isla Fisher), asks him to return to their home in Miami for the wedding of their daughter, Heather (Stefania LaVie Owen), Moondog agrees, begrudgingly. He knows that he doesn’t always mix well with normal society, and his skepticism is quickly proven right.

After a shaky wedding ceremony and a personal tragedy, Moondog suddenly finds himself dislodged from his life of PBR and bong hits, needing to finish a much-discussed novel before he can return to the life he used to have. Unsurprisingly, Moondog does not respond well to being told to straighten up – to the extent that he responds at all. More accurately, he just continues to live life to his liking, disregarding any instructions to live legitimately, and instead following his muse back under the influence. Along the way, he gets in touch with several friends, including Lingerie (Snoop Dogg), a weed-smoking (and dealing) R&B singer who may have a thing going on with Minnie and Captain Wack (Martin Lawrence), a dolphin tour captain who is very proud of his ramshackle enterprise.

Korine has always had a dogged, almost sentimental adoration for a grungier, more dangerous time in American independent cinema. His films appreciate a form of anarchy that only makes sense through the lens of the silver screen. That said, The Beach Bum is probably his most mainstream movie. Its sun-kissed positivity shields most of its nastiness, casting Moondog’s fervid search for drugs, beer and women as an almost Hero’s Journey through excess. That Korine is able to deliver such a sweet story without sacrificing his edge shows a maturation in his filmmaking that I didn’t think was possible. His previous film, Spring Breakers, was also a non-stop party about four young women doing all they can to have the perfect spring break. That movie seemed mean-spirited to me, an unsubtle trick upon its Mouseketeer cast. There doesn’t seem to be a mean bone in The Beach Bum‘s body.

Now, of course, The Beach Bum lacks any and all discipline, taking any opportunity it can to languish in Moondog’s indulgences. It includes inexplicable cameos of the likes of Zac Efron as a not-so-recovering addict with a downright offensive beard style, and Jimmy Buffett playing a version of himself that says “motherfucker” and is surrounded by topless women. What truly ties the film together is McConaughey, who plays Moondog as an outsized version of the person we have always presumed McConaughey to be. Watching McConaughey play the bongos on a yacht seems an act of metatextualism that is almost too obvious. And yet, McConaughey has never been better, and he’s never seemed more comfortable. Just a few years after he proved to have more range than any of us ever imagined, he seems to still give his best performances when he’s making it seem so easy.

I did not expect to like this film as much as I did. Korine’s belligerence is often more than I can take, and I could say the same for McConaughey, but The Beach Bum feels almost fated in its perfect fit for director and star. The film’s neon sleaziness allows the insanity of its comedy to really come to life, bringing big laughs in very unconventional ways. I find it almost sweet, the way Korine shows his affection, not only for Moondog and McConaughey’s performance of him, but for celebrated misfit artists in general. There’s a lot in Moondog, I’m sure, that Korine saw in himself.

Written and Directed by Harmony Korine