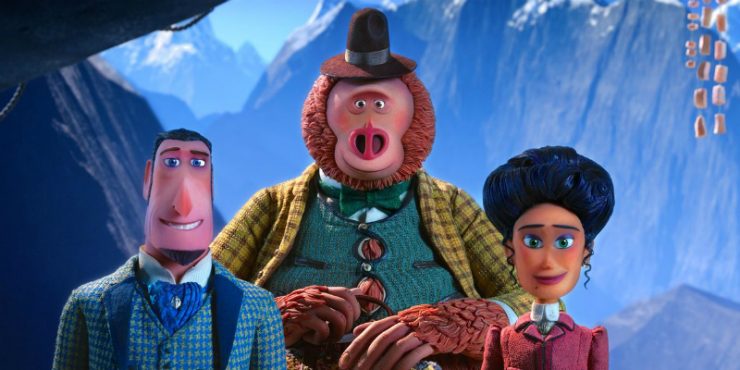 It’s refreshing to see a studio like Laika – a major Hollywood entity with corporate support that has a dogged commitment to creating unique entertainment. Challenging the other animation studios (**ahem** Disney) seems like a Sisyphean task, and it would be if that ever seemed like Laika’s intention. Instead – again, refreshingly – their films seem mostly concerned with themselves, producing odd, sometimes grotesque, tales of outcasts and underdogs. Their latest film, Missing Link, is probably their silliest, most mainstream film. It involves a Sasquatch named Susan (Zach Galifianakis) living in the American West who dreams to visit the Himilayas, where a tribe of Yeti represent his only chance at having a real family.

Susan gets in contact with the notorious English explorer Sir Lionel Frost (Hugh Jackman) to help him find his way to the other side of the world. Frost, a spry adventurer who seeks to find his place among the elite, sees the discovery of Susan as his ticket to legitimacy in the halls of the great English explorers. To aid his trip with Susan, Frost seeks out the map to Shangri-La, the palatial arctic paradise where the Yeti live. The map resides with Adelina (Zoe Saldana), the widow of another known explorer. She also happens to be one of Frost’s former flames. With Adelina and her map, Frost and Susan begin their trek across the planet, while a gun-wielding thugs named Stenk (Timothy Olyphant) looks to make their journey quite difficult.

Missing Link‘s script (which is written by the film’s director, Chris Butler) is a bit of a trifle. Despite its propensity for violence and its frank dealings with the mortality of its characters, it always feels relatively low stakes, and its humor relies much more on head-bops and crotch-punches than in previous Laika productions. But there is a charm to it, coming mostly from Susan, a gentle, innocent character who thankfully is never asked to be more than that. What Missing Link does have is exquisite animation and character design, mesmerizingly moving back and forth between breathtaking and peculiar. Link‘s narrative does not contain that gravity of Kubo and the Two Strings nor does it reach the levels of absurdity of The Boxtrolls, but it is still a visual delight, a statement that there can still be originality in Hollwyood animated features.

Written and Directed by Chris Butler