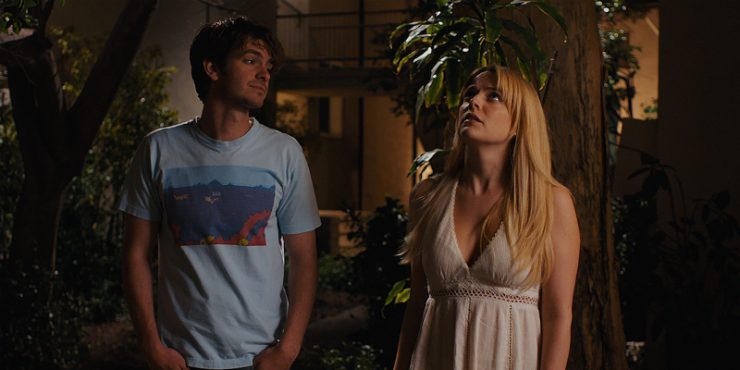 The lure of a movie like Under the Silver Lake – the new thriller-comedy from David Robert Mitchell, which is busting at the seams with LA noir allusions – is in what it denies its audience. Common logic holds little water in a world like this. In Silver Lake, that world is Los Angeles, shown here as a grungy, skunk-and-coyote-infested wasteland populated only by beautiful young women (often undressed) and deadbeat men. All the male characters, including our main character Sam (a scruffy, aimless Andrew Garfield), are peddling some form of scumbaggery, while all the female characters seem to cling dependently. Around them, their neighborhood is being terrorized by secret codes, dog killers and a possible subterranean community.

Sam has a preoccupation with conspiracy theories and is possessed by a paranoia that leaves him spending most of his time inside of his apartment that he hasn’t been able to pay rent on. His unemployment is an unexplained but cemented fact of his life, while his human interaction consists of occasional meetings with an actress (Riki Lindhome) whom he sometimes sleeps with and a bar buddy (Topher Grace) who has a creative but unnerving taste for voyeurism. When Sam meets a new neighbor named Sarah (Riley Keough) by his complex’s pool, he becomes infatuated. They share a brief night together before Sarah disappears the next day. Her vanishing leads Sam on a long, violent, complicated search.

Following a string of clues that may or may not be actual pieces of information, Sam finds himself digging deep into LA’s seedier underbelly, filled with famous billionaires, movie-acting prostitutes and a band named Jesus and the Brides of Dracula. He discovers clues from cereal boxes, pop songs, even old magazines sitting around his apartment. As he gets further down into the rabbit hole, he becomes more and more isolated, losing the few friends he has, pulling his hair out trying to figure it all out. His search for Sarah becomes less about his affection for her and more for his need to find meaning – a meaning that becomes so elusive that it sometimes spurs him into scenes of incredible violence.

Silver Lake‘s first half is a striking, rat-a-tat rotation of sequences meant to recall Hitchcock, Altman and a shade of the Coens. Those influences seem to be battling within the film for supremacy, before succumbing to David Lynch by the film’s second half. The film’s penchant for frequent glimpses of odd, unsettling imagery is meant to reorient our feelings of the reality we are experiencing. And truthfully, the film rests so deeply within Sam’s consciousness that it makes it difficult to figure how much of what we’re seeing is “real”. Like Lynch, Mitchell keeps his cards close to vest, but unlike Lynch, he’s not skilled enough to bring all of this imagery into a single, coherent statement. It feels like reverse engineering without a thought-out conclusion.

Perhaps the biggest mistake the movie makes is presuming that its audience will be as obsessed as Sam in his quest. Like the protagonists of The Big Lebowski and Inherent Vice (another two films that Silver Lake homages), Garfield’s Sam is a burnout, under-qualified for the task ahead of him. But Sam’s behavior is so erratic. His tenderness seems to belie his dangerous nature, the perfect candidate for some Shyamalan-like I’m-the-villain-all-along twist ending. But Mitchell seems to be more interested in the dynamics of mood within the noir genre than the machinations of noir narrative. Garfield plays Sam with a Nicholson-like mania, and does a pretty good job, but Mitchell has him act everything out with little payoff. We don’t need to root for him, but simply understanding him would suffice.

This is Mitchell’s first film since the incredibly successful It Follows. Like Silver Lake, It Follows was a stylish genre piece with a fixation on the darker side of sexuality and desire. This new film is bigger, more ambitious, less disciplined. Mitchell is obviously an exceptional talent. His collaborations with cinematographer Mike Gioulakis and score composer Richard Vreeland (credited as Disasterpeace) produce intoxicating set pieces, that feed off not only what the audience expects, but also what they may not admit they want. Silver Lake suggests a deep knowledge of classic cinema, and all three work brilliantly toward fleshing that out. But all of that kind of becomes flat by Under the Silver Lake‘s final hour, which becomes just as needlessly obsessed with its unhinged plotlines as its protagonist, and I’m not sure everyone else followed.