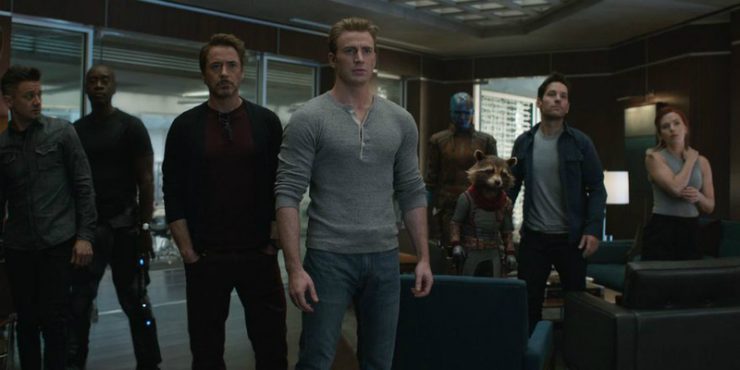 If reducing half of your characters to dust felt like a radical way to end Avengers: Infinity War than its immediate follow-up, Endgame, will give you an even greater feeling of misdirection. From the very start, Endgame expertly evades audience expectations. Even as a superhero movie – which follows storytelling laws that clearly state that the good guys must win in the end – Endgame is delightfully dexterous. Working as both a triumphant send-off of a decade’s worth of movies and a possible reset of the entire Marvel Cinematic Universe, Endgame is exactly what you’d want this kind of major Hollywood event to be: action-packed, often hilarious, occasionally dangerous. Bringing the gang back together and then some, Endgame leaves no stone unturned, causing even a comics-agnostic like myself to have a lot of fun.

After the events of Infinity War, the remaining Avengers are left aimlessly wandering, drenched in their own trauma, grasping desperately at any chance that they can to track down Thanos (Josh Brolin), the finger-snapping, pinkish-purple ultra-villain who wiped out half of the Earth’s population. Tony Stark (Robert Downey Jr.) is trapped wandering the ends of the universe, while Clint Barton (Jeremy Renner) – who purposely avoided the fray – finds his entire family gone in an instant. Then there’s Thor (Chris Hemsworth), James Rhodes (Don Cheadle), Natasha Romanoff (Scarlett Johansson), Bruce Banner (Mark Ruffalo) and Captain America himself, Steve Rogers (Chris Evans), who witnessed Thanos’ vicious act firsthand. Even the arrival of Carol Danvers (Brie Larson) in her full Captain Marvel glory does little to lighten the mood.

How the leftovers come together to save what they lost in the previous film is both clever and worth keeping a secret. I will say that they get help from Steve Lang’s Ant-Man (Paul Rudd), the scruffiest Guardian of the Galaxy, Rocket (voiced by Bradley Cooper), and a former enemy, Nebula (Karen Gillan). As usual, allegiances are tested, relationships are created, and more than a few odd couples are produced among the new ragtag group. Endgame introduces elements that feel more explicitly violent than any MCU film I’ve ever seen, but also possesses the comedic deftness of Taika Waititi’s Thor: Ragnarok which opened new possibilities of how funny these movies can be. It’s ability to shift back and forth between these two poles has always been a highlight from these films’ best entries.

The film’s script, written by Marvel veterans Christopher Markus and Stephen McFeely, is a masterful piece of narrative payoff. So much so that I can hardly believe that these are the same two screenwriters who wrote Age of Ultron and Infinity War, two films so severely constipated by the script’s inability to string along multiple storylines to their eventual conclusion. Without the burden of needing to extend the storyline, Markus and McFeely are able to weave together a much more satisfying feature. A large portion of the film’s plot hinges on complicated concepts of physics, ethics and morality that would probably fall apart under interrogation, but by putting the characters first, Endgame is the first Marvel film since the first Avengers film to so smoothly and skillfully blend the seriousness of the story’s stakes and the lightness of the genre into a successful piece of Hollywood filmmaking.

The film’s directors, the brothers Anthony and Joe Russo, are the longest tenured directors in the MCU, and this is their fourth feature in the series (more than anyone else). You get the sense that they produce a little bit of what Edgar Wright may have done with Ant-Man had he ever gotten the chance. The Russos, who excelled in contemporary TV comedy before joining forces with Marvel, have a keen eye for comic timing, and how to use it to make the dramatic moments even more effective. It’s only natural that the final film in this series would be a little weepy, but Endgame‘s emotional breakthroughs are straight out of the Disney playbook (the studio which owns Marvel). Unlike the Russos’ previous work in Marvel films, this film actually earns its emotion, as if Disney finally trusted a filmmaker enough to let them tell the story their way.

Lost in the chaos of Infinity War‘s conclusion may have been that among the survivor’s of the infamous snap were the original group of Avengers, which gives Endgame a chance to focus on the series’ core group while setting the stage for the next generation. Johansson, Evans and Downey Jr. have all been around for a decade-plus, with Ruffalo and Cheadle picking up where other (more troublesome) actors left off. Endgame has a serious sense of loyalty to these actors, and allows us to really feel their years-long commitment within the story. This is no more truer than with Downey Jr., whose performance as Tony Stark is really what props up this entire franchise. His career has been defined by his perfect blend of searing sarcasm and emotional gravitas, and Stark has given him the greatest chance to broadcast that on the biggest possible platform. He is often the best performance in these films, and Endgame‘s ability to showcase its most prized star was not only great, but incredibly touching.

Endgame‘s billion-dollar opening is both a statement and a signal. It’s pretty easy to say that this is what movies are now: an elongated mini-series with feature-length episodes meant to be seen in the communal space of movie theaters. Marvel – well, really Disney – still has a frightening grasp on the film industry, in a way that suggests that anyone with Marvel-averse tastes will have little to watch for the next few years. I find that reality sobering, but I’ve seldom thought that has effected the quality of the films themselves, which is a bit of a grab-bag in terms of quality, but has still produced the first Iron Man, the first Avengers, Guardians of the Galaxy and Thor: Ragnarok, and several others (including a few I’ve chosen not to see!) that truly redefined what superhero movies can be.

Even to the degree that some of Marvel’s films have failed (I mean narratively since as far as I know none have failed financially), their commitment to their storyline cannot be questioned. The culmination in Endgame feels a lot like the up-and-down television series that really nails its final season. In fact, it doesn’t just feel like that, it is that, and I don’t think saying it should feel like a slight on Endgame‘s cinematic achievement. It takes the TV-like precision of writing to bring this kind of thing together successfully, and boy do they ever.