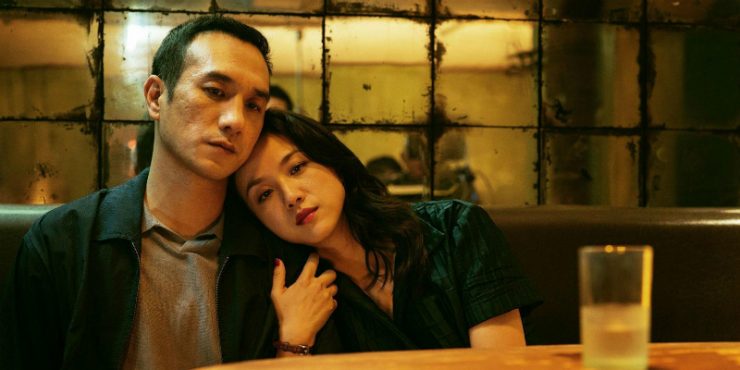 This exotic, evocative opus that spins in and out of reality (and in and out of 3D), is the latest film from Bi Gan, the fearless Chinese director. His second feature, Long Day’s Journey Into Night borrows an iconic title from Eugene O’Neill if nothing else, and follows a man, Luo Hongwu (Huang Jue) (who may be a detective or a hitman), returning home in an attempt to rediscover a woman from his past who disappeared. He meets Wan Qiwen (Tang Wei), a crime lord’s girlfriend, who looks like the woman he is searching for, but as time goes forward, it becomes unclear whether or not Wan Qiwen is that woman after all. About halfway through the two-hour, twenty-minute film, we’re invited to put on 3D glasses and watch an hour-long shot where our protagonist meets another woman (also played by Tang) who also haunts him and brings back old memories.

The film’s plot borrows heaps from boilerplate noirs, but does so mostly in a scheme to manufacture mood as opposed to building a complex story. Even before the extra-long take at the end, Bi’s camera lingers heavily for stretches, while characters monologue about spells, apples and karaoke. As the characters discuss dreams, it becomes clear that what we’re seeing is somewhere between what they experience consciously and subconsciously. The movie’s cinematography – lush with color and strict in composition – is more a feat of craftsmanship than it is truly startling filmmaking, and perhaps that’s the case because it’s so hard to understand just what is going on. Long Day’s Journey Into Night can be appreciated solely for its cinematic ambition, and I wouldn’t blame those who do. But it’d be hard for me to find anything else to write home about.