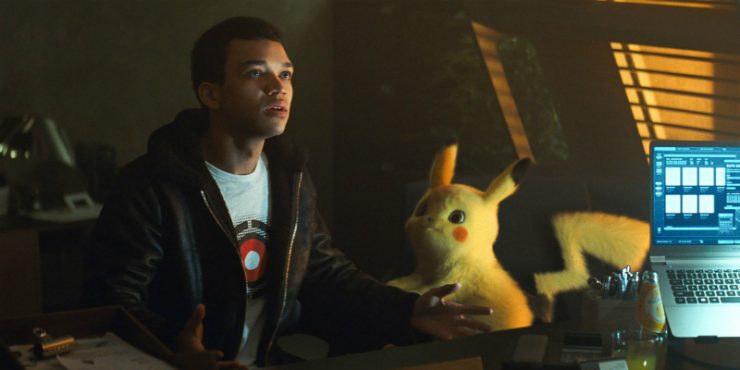 Trading in on the kind of nostalgia that Pokémon Detective Pikachu shamelessly languishes in should be more of a turn-off than it ultimately is. The film is working overtime to generate feelings from 90’s kids (which, full disclosure, I am one) on their favorite fantasy pets. I have recollection of the Pokémon boom in the mid-90s and took full part in it, but upon hearing of the Detective Pikachu production, I was mostly just fatigued. The relentless mining of childhood franchises has done a number on me. So much so that I hardly even care whether or not the films are good, I just crave our major studios come up with an original idea. In lacking that, it appears that a film like Detective Pikachu is the best we can hope for: a film that uses a widely popular source material to create something relatively unique.

Pikachu is far from the first Pokémon movie, though it is the first one that I can remember enjoying. Not only does it discard the well-known narrative of Ash Ketchum – the franchise’s main human protagonist – but it completely dismantles any regard one may have of Pokémon as anything other than frivolous children’s entertainment. So, instead of making a Pokémon story, director Rob Letterman instead creates something within a universe that just so happens to have Pokémon. The result is a new generation’s take on Who Framed Roger Rabbit?, in which a boilerplate noir is populated by adorable animated creatures. As the title suggests, our main Pokémon is the famed Pikachu, though he acts like no other Pikachu you’ve seen before.

Voiced by Ryan Reynolds – who’s made an entire career capitalizing on just this kind of sardonic cuteness – the Pikachu we see hear is a wise-cracking, coffee-addicted detective in a deerstalker hat. After his former human partner, a police officer named Harry Goodman, is killed in a car accident, Pikachu teams up with Harry’s son, Tim (Justice Smith), to figure out what it all means. Tim is a jaded young man who’s relationship with his father is complicated at best, but when he discovers that he can miraculously understand everything that Pikachu is saying (he doesn’t just hear ‘Pika! Pika!’), he becomes intrigued by the mystery. Hit with a bad case of amnesia, Pikachu needs all the help he can get, especially when they learn that Harry’s death may have been a trick, and Tim’s father may still be alive.

There are other players involved, including an ambitious intern named Lucy Stevens (Kathryn Newton) who hopes to make the leap into the big time in television journalism. With her neurotic Psyduck, Lucy has valuable information that can help Tim and Pikachu find Harry and cure the Pokémon’s amnesia. There’s also Howard Clifford (Bill Nighy), a disabled corporate magnate who created Ryme City, an idyllic urban metropolis that promotes harmony between humans and Pokémon by making Poké-battles illegal. Howard also wishes to find Harry, hoping the detective holds the key to stopping a shadow enterprise that might set to undermine Howard’s hard work. As the secrets pile higher and higher, Tim and Pikachu must dig deeper and deeper to figure it all out.

Detective Pikachu‘s script (by Letterman, Dan Hernandez, Benji Samit and Derek Connolly) quickly falls apart as it tries to create the complexity of a noir narrative. It’s pretty obvious that Letterman and his writers were much more interested in bringing these creatures to life than polishing the story that surrounds them. Even its setting, the opulent Ryme City, is meant to evoke the gassy underbelly of Blade Runner but erases all of the decay. What’s left is a sort of steampunk Tokyo that somehow has no Asian residents (with the exception of a cameo by Ken Watanabe as a police chief). By its second half, Pikachu defaults to sentimentalities and few will be surprised by who ends up being the true bad guy, or even the true good guy. For all its clever sarcasm, Detective Pikachu doesn’t have much interest in sophisticated screenwriting.

And maybe I don’t blame them. Being made primarily for a millennial crowd that seems to have an unquenchable thirst for reminders of their childhood, Pikachu‘s second biggest audience is certainly children. Neither of those groups will likely have any issues – or, really, any recognition – of this movie’s gaping plot holes. Perhaps what matters most is how good the CGI is at creating these more-dimensional Pokémon, and how well-shot this film is (shot by action movie mainstay John Mathieson) when it really didn’t have to be. As a millennial, I’ll confess to being fully under Detective Pikachu‘s spell for the most part. Its humor was welcome if not abundant, and it did give me a sense of comfort to revisit a childhood staple. It’s probably up to another generation to say what else Detective Pikachu brings to the table, though I would guess not much.