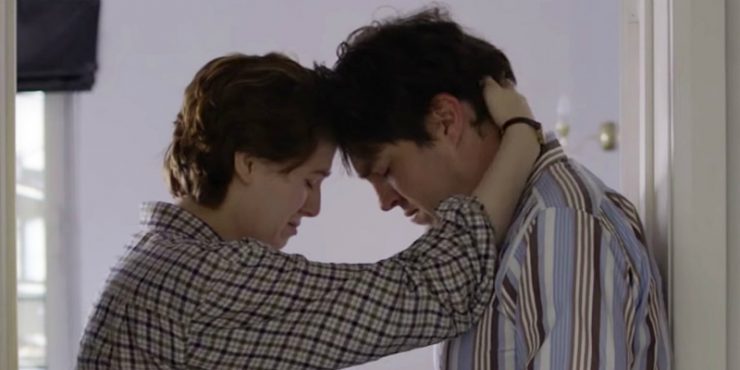 There’s a gulf in The Souvenir that lies between the clarity with which the film views the troubled relationship at its center, and the ways in which its characters distort their reality to imagine a normality that isn’t there. Writer-director Joanna Hogg places her film within that gulf, not allowing the naiveté of her protagonist – nor the cruelty of the protagonist’s partner – to fully grasp control of the story’s emotional turbulence. Hogg, in her fourth feature, shows a mastery of complex human emotion, an acute understanding of love and the deceptions we pull on ourselves, as well as others, to make something last. It’s an astonishing feat, one I can’t imagine being duplicated in any other film this year.

The film stars Honor Swinton Byrne – the daughter of Tilda Swinton, who also plays a smaller part as her mother – as Julie, a film student in her mid-20’s, trying to complete her first feature within a stringent, yet surprisingly supportive film program. Her film is described several times throughout The Souvenir, and suggests an emotional turmoil that lies both within and outside her own personal experience. She strives to learn about the world around her, and her subject matter is meant to reflect that. Coming from a background of financial privilege, she hopes her art can speak honestly and sincerely. But the truth is that she hasn’t experienced much. Until she meets Anthony (Tom Burke).

Coming within Julie’s circle of friends, Anthony’s cool, sardonic humor and his lack of enthusiasm can seem like maturity. The seriousness with which he chooses to express his opinions can seem like conviction. That he shows his affection for Julie in detached, nonchalant ways doesn’t seem to matter much to her. She falls for him in a way that even she doesn’t much understand, though as his outer shell melts away, he proves to possess the very levels of sincerity that he chooses to mock. Anthony proves to be a very poor boyfriend, but the ways in which Hogg reveals this are not how you’d expect. As their circle of dependence deepens, The Souvenir constantly surprises you in how it chooses to follow this whirlwind romance.

It wouldn’t be right to reveal just how the relationship at the center of The Souvenir goes South, though I will say that the trajectory seems clear very early on. Tom Burke’s Anthony is a man whose own self-interest often gets in the way of his relationships, and while this character is nothing new, it’s simply brilliant the way in which Hogg exposes the depths of his insecurities and his instability. Swinton Burke’s Julie is nothing new either, but the young actress’s performance of her – of her desperation, of her helplessness in the face of Anthony’s anguish – is something truly incredible. Caught in between searching for the life experience she craves and being overwhelmed by its arrival, Swinton Burke’s Julie shows the kind of remarkable empathy that all great artists are blessed with.

In a decade, Hogg has established herself as a formative presence. Much like the Merchant-Ivory films that came before her, she delves within the crust of upper-class England to dissect the hidden urges and desires. More than anything, she is skilled at displaying the ways in which passion often overcomes reason. The Souvenir is set to be her most mainstream film yet, at least in terms of the scope of its release. A hyped Sundance premiere didn’t hurt. Hogg’s strict composition – her great use of framing and reflections throughout the film – adds to The Souvenir‘s somber austerity, and yet this film is not nearly as stuffy as it may initially appear. Instead, it’s a film bursting with feeling and humor. You just need to know where to look for it. Hogg is more than happy to help you find it.

Written and Directed by Joanna Hogg