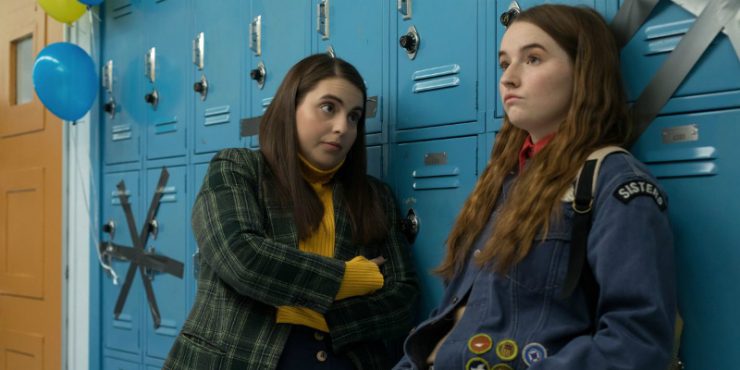 The concept of ‘one crazy night’ high school films has become one of Hollywood’s greatest fantasies. It taps into the imaginations of different people and age groups, so it makes sense that they keep getting produced. Booksmart, the latest film made in this tradition, doesn’t change too much plot-wise, but it does star two women (Beanie Feldstein, Kaitlyn Dever), it is produced by Megan Ellison’s Annapurna Pictures, and it’s directed by the actress Olivia Wilde, her debut. These personnel choices end up paying dividends in the film’s execution, which both appreciates the tradition of the previous films of this comedy sub-genre, while fearlessly breathing new life into a stale storyline.

Feldstein plays Molly, the valedictorian of a Los Angeles high school who was accepted into Yale. Her domineering, self-righteous personality has driven nearly everybody in the school away from her, with the exception of her best friend Amy (Dever). Amy happens to be the salutatorian, and has also been openly gay since the tenth grade. Despite their achievements, Molly and Amy feel incomplete on the day before their graduation, and when they learn that the irresponsible partiers also got accepted into Ivy League schools, they decide to finally indulge in some debauchery. Learning of a raging party without adult supervision, the two best friends do everything in their power to attend.

More motivations arise for attending the party, including a crush that each harbors for another graduate. For Amy, it’s Ryan (Victoria Ruesga), a tattooed skateboarder who sends Amy hard-to-read interest. For Molly, it’s the more-popular class vice president, Nick (Mason Gooding), who has given class president Molly little-to-no assistance in her administration. As you’d expect, they run into mishaps along the way, such as boarding a boat hosted by the town’s much-loathed rich kid, Jared (a hilarious Skylar Gisondo) and his trippy friend – and surprise wisdom bearer – Gigi (scene-stealing Billie Lourd). They also walk into a murder mystery party hosted by the class’ most demanding drama kid, George (a pitch perfect Noah Galvin). They even get an uber ride from their principal (Jason Sudeikis).

The film’s script – written by Emily Halpern, Sarah Haskins, Susanna Fogel and Katie Silberman – has a little bit of patchwork on it, with various drafts paying different homages to the wide variety R-rated high school flicks. But as director, Wilde shows a pretty sure handle on the experiences of these girls. It does this while still paying credence to the absurdity of its comedic premise. The film’s cruder moments hit great comedic notes without becoming skeezy (a scene where the girls try to watch porn in the back seat of a car is a real hit), which allows its inevitable sentimentality to really hit home with great effect. Wilde’s strong understanding of what’s funny, and also what Molly and Amy go through really makes Booksmart shine.

It’s probably no coincidence that the recent stream of successful female coming of age stories – from Gerwig’s Lady Bird to this year’s The Souvenir from Joanna Hogg – have all come from female directors. These films have all taken well-worn storylines but have reconstructed them into things that feel so incredibly unique. Booksmart doesn’t quite possess the strength of voice or filmmaking assertiveness of some of the others, but it is still a remarkable achievement. Many will note similarities to Superbad (which stars Feldstein’s brother, Jonah Hill), but Booksmart takes a much more complicated view of the dynamics of adolescent relationships and desire. Simply, it’s unlike any teen comedy I’ve seen before.