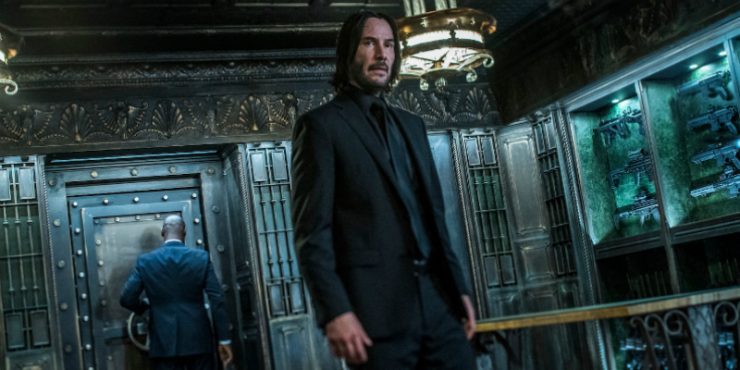 The mythology built within 2014’s John Wick felt so overwhelmingly refreshing. There was a simplicity to it: its protagonist was a ferocious man, known for being an unstoppable killing machine while also being equally un-killable. And yet, people continued to try. It was the world around that protagonist that was complicated. A secret underground organization of assassins can’t seem to decide whether or not it’s worth it to keep Wick or take him out. A lot – a lot – of people have died in the process. This setting is outrageous enough to help us buy into Wick‘s insane premise. The titular Wick is played by Keanu Reeves, who has completed a decades-long transition from limited action performer to movie star legend. The third chapter in the Wick series pays homage to Reeves’ sustainability, as well as the series’ complete absurdity.

The first Wick was followed by a sequel – a Chapter 2 – that was so dull that I feel no shame in saying I hardly remember any of it. What Parabellum gets right is to concede that Wick films no longer need the mythology to be built upon further. All we need now is Reeves’ Wick in constant survival mode. This legendary killer – a perfect mixture of strength and resourcefulness – can seemingly kill his way out of any obstacle, though he hardly comes away unscathed. At the end of the second film, Wick was declared “excommunicado” from the High Table, a worldwide network of contract killers with endless influence and power. A $14 million bounty is put on Wick’s head. Chapter 3 picks up almost immediately where it the second left off, and now Wick must find a way out of Manhattan with half its population trying to kill him.

Of course, Wick makes it out. Not only Manhattan, but he gets all the way to Casablanca, Morroco. He enlists the help of former colleagues, including a Russian ballet director (Angelica Huston) who moonlights as a very severe orphanage caretaker and a former assassin turned High Table hotel manager named Sofia (Halle Berry) who comes equipped with two ferocious dogs. In his way is not only the entire High Table workforce and its New York City figurehead Winston (a returning Ian McShane), but also a pesky adjudicator (Asia Kate Dillon), who has the Sisyphean task of trying to repair the institutional chaos that Wick and his co-conspirators have wrought. The mix of old and new faces presents many a  violent opportunity, involving guns, knives, books and even on some occasions the hind legs of a horse.

While Chapter 2 was drowned in self-seriousness, Chapter 3 dials up the outrageousness, using little excuse to display stunning violence. The film also has perhaps the most breathtaking fight choreography of the series – aided no doubt by the casting of martial artist Mark Decascos as Zero, an assassin who relishes the opportunity to take down Wick, even while shamelessly being his number one fan. Neither sequel has the impact of the first film, but at least Parabellum has a stronger sense of what it should be, even if at times that means being one of the funniest comedies of 2019. On the whole, John Wick: Chapter 3 is mostly bad, with little thought put outside of its action sequences, but for those who just want unleaded Wick-ness, I can’t imagine anything much better.