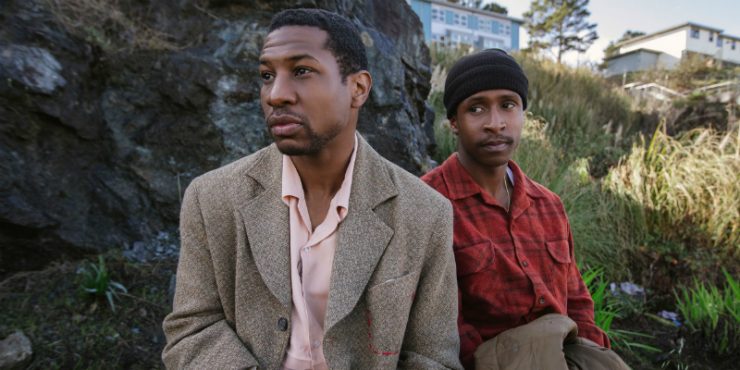 Occasionally you see a film so stunning, so beautiful that it stops you in your tracks. The Last Black Man in San Francisco is that kind of film. Awash in gorgeous colors and evocative imagery, this indie evokes so much of its character’s complicated feelings with remarkable skill. Examining the title city, Last Black Man is one in a long tradition of movies to try and tackle the troubling evolution of this Bay Area capital. Once a haven to so many different types of people, and now overrun by skyrocketing property values and Silicon Valley, San Francisco has become a ripe metaphor for American gentrification, for a cultural diaspora that has plagued many urban metropolises across the nation. The Last Black Man in San Francisco may also happen to be the most beautiful within this tradition.

Lead actor Jimmie Fales created the original idea for the film with director Joe Talbot (Talbot wrote the finished screenplay with Rob Richert), with the concept of exploring the socioeconomic politics that have divided San Francisco’s residents through one man’s story. Fales plays a character named after him, and the story is said to be heavily based on his actual life. The Fales of the film is a nursing home attendant who lives with his best friend Mont (a tremendous Johnathan Majors), in a cramped house with Mont’s blind grandfather Allen (Danny Glover, in a short but incredibly sweet performance). Jimmie’s main preoccupation is visiting his former family home near Golden Gate, and checking up on the grand house’s upkeep, much to the current (white) resident’s chagrin.

Obsessed with small details like the poor state of the backyard garden and giving coats of paint to the red windowsills, Jimmie resents that the large, palatial home is no longer within his family (his father lost the house in the 90s under vague, underwhelming circumstances). Mont, a sensitive artist with a budding idea for a play, indulges his best friend’s obsession, helping Jimmie keep up the house’s condition and even standing lookout for when the new owners arrive. When the house ends up tied up in a testy estate battle, the current residents vacate, giving Jimmie what he’s always wanted: an opportunity to take the house back for himself. For Jimmie, this is more than just a home. As legend has it, the home was built after World War II by Jimmie’s grandfather, who took control over every detail, perfecting each element with his own two hands. How could Jimmie let anyone else think of taking the property?

Jimmie and Mont take over the home, filling it with old furniture, taking advantage of the newest amenities that its white occupants happened to add. Camping out in a neighborhood that has gone from proudly black to staunchly white, Jimmie and Mont attract a small amount of attention, but are mostly left alone to luxuriate in their paradise while the house is in real estate limbo. Of course, issues do arise. From one end, they come from real estate agent Clayton (Finn Wittrock), whose Bay Area lifer status doesn’t exactly breed sympathy for Jimmie’s plight. There’s also Jimmie’s father, James (Rob Morgan), who has little patience for his son’s extracurricular activities. To James, the house is only a reminder of his biggest disappointment, but to Jimmie, the house is a chance to reclaim his humanity.

As Last Black Man unfolds, the script dives deep not only into Bay Area discrimination, but also the complicated worlds of black male psychology. Jimmie is a quiet skateboarder and Mont is an eccentric creative, which gives neither much of a chance to fit in with most men of their neighborhood, who pride themselves most on exterior displays of strength and intimidation. A small group of young men who stand outside Mont’s house, seemingly in perpetuity, frequently shout at the two friends for their muted demeanor. Priced out of San Francisco by a tyrannical real estate system (a scene where Jimmie visits a bank and crudely asks for a loan is among the film’s most disheartening), the two friends are also pushed out of the social groups within the neighborhoods they can afford.

Which is how the house begins to have meaning for Mont too. The house becomes symbolic of everything these two men hope to find in life: a home, a meaning. Jimmie and Mont can’t stay in the house forever, though the film really makes you wish that they can, but it’s their search for that ideal that makes their journey so special. The movie never talks overtly about San Francisco’s politics because it never really has to, its circumstances are so self-evident. Talbot’s lush photography (aided by cinematographer Adam Newport-Berra) does well to reveal the truly awesome power of finding the home that allows you to belong, and the film’s script does a very efficient job of revealing how much harder it is for young black men to find that belonging – especially if they live in San Francisco.

Fales is not the most polished actor, and against the dynamic work from Majors, his lowkey work can be hard to appreciate. It’s just that The Last Black Man in San Francisco is a work that is so obviously personal to its creators that it can sometimes feel like we’re eavesdropping on theses mens’ souls. The film’s many tight, shallow-focused close-ups will call to mind Barry Jenkins (who incidentally also made a great film about San Francisco called Medicine for Melancholy), but Talbot is not eliciting the same emotional responses. Where Jenkins is highlighting beauty and sadness, Talbot isolates, magnifying the loneliness and displacement felt by his two main characters. They’re both searching for the answers within the walls of this magical house, but the film is smart enough to know that the truth is everything outside of it.