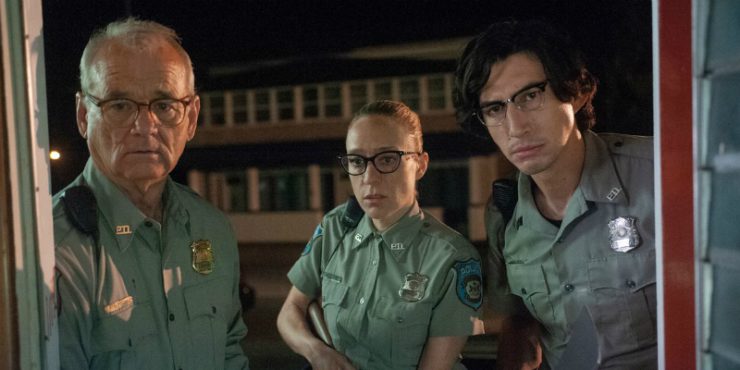 A legend within American independent cinema, writer-director Jim Jarmusch has gained that reputation because of his penchant for unique, often odd experiments in narrative filmmaking. His interest in examining characters or story is often missing, his habit for reexamining genre and plot structure is always readily apparent. His films seem to spawn out of a frustration with the fundamentals of movie storytelling, a lashing out against Hollywood structures that have built the foundation for how we experience everyday movies. This has produced mostly fascinating diversions like Night on Earth, Dead Man and, more recently, Only Lovers Left Alive. His most recent, The Dead Don’t Die, is not one of those fascinating diversions.

A take on the zombie picture, the film focuses on the town of Centerville, an aggressively quaint small town (it’s slogan is “A Really Nice Place”) with a Main Street equipped with a hardware store, a diner, a gas station & memorabilia store, and a police station employing only three officers. The head of the police, Cliff (Bill Murray), is an even-keeled man who was meant to retire years ago. His two younger officers, Ronnie (Adam Driver) and Mindy (Chloë Sevigny), have little experience or police instincts, but that doesn’t seem to matter much since nothing bad seems to ever happen in Centerville. That is until two coffee-loving zombies (one played by Iggy Pop) storm into the diner and kill two waitresses (Eszter Balint and Rosal Colon).

Cliff and Mindy are at a loss for words, but Ronnie immediately knows the culprit: the undead. This ungodly phenomenon seems to be caused by irreversible environmental disruptions caused by fracking that has altered the Earth’s axis and made corpses rise out of their graves. The townspeople try to prepare. Hank (Danny Glover) has a shop filled with tools to help him fight them off, while Bobby (Caleb Landry Jones) has the zombie movie know-how to outsmart them. Racist farmer Frank (Steve Buscemi) is used to warding people off his property, while forrest dweller Hermit Bob (Tom Waits) watches, mesmerized from the trees of his makeshift home, watching the destruction of the civilization that surrounds him.

There’s also an undertaker named Zelda (Tilda Swinton), a Scottish, androgynous eccentric with a collection of samurai swords. Like many other characters within Centerville, her initial reaction to the zombies is incredibly cavalier, and her defenses against them – sporting one of her lethal swords – is nearly perfect. Zelda is new in town, and a subject of town gossip. When the zombies arrive, she’s the only one who seems totally comfortable. How Zelda fits into The Dead Don’t Die‘s story is a bit uneven. The same can be said for a trio of teens (Maya Delmont, Jahi Winston, Maya Delmont) who witness the carnage from a juvenile detention center, and another trio of travelers (Selena Gomez, Austin Butler, Luka Sabbat) who are unlucky enough to be passing through when the danger begins.

The cast is large and funny (Driver, especially, seems to have a note-perfect handle on the type of absurdity that Jarmusch seems to be striving for), but they’re mostly overqualified for what Jarmusch is giving them. Its comedy stems from a sardonic, metatextual conceit, in which some characters occasionally understand that they’re within the universe of fiction, though mostly they do not. The film really reaches out into the extra outer limits of deadpan, supplied with mostly B jokes delivered in monotone pitch or PG sight gags, like having Rosie Perez play a newscaster named Posie Juarez. Throughout, it has the feeling of the Zucker brothers on Valium, a shaky homage that charades as deconstruction.

Like a lot of other zombie films, The Dead Don’t Die ends up providing political commentary. Its metaphors target consumerism, the dread of global warming, and MAGA intolerance in small-town America. We are, after all, zombies to our phones and media and blah, blah, blah. Its message is even flatter than its humor. As per usual, Jarmusch takes unique alleys into the story he chooses to tell, and doesn’t seem to care much whether we accept his version of the story. That said, this film feels both overstuffed and undercooked, an attempt at nihilist satire that is neither funny enough or philosophical enough to have any real impact.

Written and Directed by Jim Jarmusch