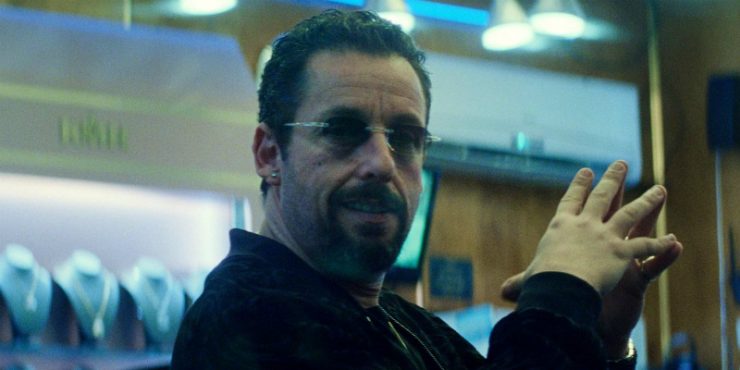 The Safdie brothers universe is somewhere in between the gritty verité of 70’s William Friedkin and the neon pastiche of 80’s Michael Mann, and yet their films always escape feeling derivative. Their singular vision is their most valuable asset, and they’re been savvy enough to utilize it in their last three films, each of which has upped the ante in style. Good Time – their 2017 feel-bad, beat-the-clock drama – was a bit of a crossover for them, starring Robert Pattinson, a legitimate movie star. That film was all style, a bit too convinced it was winning people over with its overarching, stress-inducing restlessness. Uncut Gems has none of those issues, but it does have Adam Sandler, who is – dare I say it? – the best actor these exciting young directors have gotten a chance to work with.

Gems has been having a very, very good press run since its debut on the festival circuit, and it has even reset our overall idea of what Sandler is. The film is making a concerted awards push for him here (I’m dubious, but hopeful), and there’s been several articles and internet pieces that are here to say: all the things we’ve thought were bad about Sandler are actually good. The truth is somewhere in between, with many of his comedies (the man is nothing if not prolific) falling just below the line of watchable, but his good performances – which are adding up – are no longer considered flukes. At the heart of his man-child comedic persona, is a person very capable of displaying pathos, and possessing an unpredictability that can lead any movie into extraordinary places.

In Gems, Sandler is Howard Ratner, a Manhattan jeweler and habitual gambler. His family lives in Long Island but he keeps an apartment uptown. His wife, Dinah (Idina Menzel), is fed up and counting the seconds until they can start divorce proceedings, and his much younger girlfriend, Julia (Julia Fox), has a penchant for partying hard, flirting with other men, and not showing up to work on time (she works in his showroom). His personal life is made more unstable by his incessant gambling, which moves beyond sports bets and casinos, and into borrowing cash from dangerous heavies and pawning championship rings from professional athletes. His affairs are always tied up, the chips always being pushed forward, always in search of the score bigger than any… until the next one.

What Howard wants most is a blue opal from an Ethiopian mine that is said to have been excavated by African Jews. The mythical rock comes from an especially dangerous area – a short scene at the beginning of the film shows exactly how dangerous – and when it arrives in New York, Howard is quick to speak of its priceless value. He’s also quick to say it’s worth over a million dollars. The bulbous stone, shining brightly and colorfully with the opals inside, is his shield against all those he owes money, watches, diamonds. The stone is Howard’s key to impressing star basketball player Kevin Garnett (who plays himself), and easing those who look to collect the copious amounts of money that Howard owes. He uses it to play a risky game of cat-and-mouse, with a payday bigger than any he’s had before.

We first meet Howard laid up on a hospital bed, in the middle of a colonoscopy. From the moment he wakes up, Uncut Gems surges forward, ruthlessly, jumping from stone to stone, watching the fast-thinking Howard slink in and out of danger. There are no scenes of him going to sleep, and it’s easy to believe he never does. Occasionally, he receives a punch in the face, an elbow to the throat. One time, he’s stripped naked and thrown in the trunk of a car. None of these deter Howard’s pathological need to constantly have his life in peril, living desperately off the adrenaline of winning and losing at every second. When he wins an impossibly expensive 3-prop parlay placed during a mid-round playoff game, he reacts more orgasmically than when he’s crawling into bed with the scantily-clad Julia.

Howard is said to be at least partially based on the Safdies’ own father – their film Daddy Longlegs from 2009 more specifically details the punishing effects their father has had on them – and Uncut Gems is definitely the work of people who have learned to have a base level of distrust. The characters in their films are unreliable, violent people, who have no qualms inflicting physical or emotional damage on those around them. Their maliciousness is front and center, and it’s up to us to pick and choose whether or not we can sit and watch them. Gems is their best effort, and the most success they have had in milling a tight, claustrophobic thriller out of a distasteful protagonist.

I think even the brothers would admit that a lot of the credit for that goes to Sandler, whose whole career is built upon making selfish petulance likable. I consider myself a Sandler fan, though I have often been turned off by his more schmuck-y parts. It’s too easy for him to be insufferable, and it’s often his soft sincerity that leads to the most complexity in his serious work. It may not seem like it at first, but Gems perfectly distills everything Sandler does best into one part: his childishness, his charm, the casualness of his romance, the ease with which he can turn from peevish to endearing. I don’t know if you’re rooting for Howard as you watch the movie – his actions fall short of unforgivable, but are certainly an example of horrible judgment – but you’re certainly not displeased when his plans come together.

Gems takes place in the Spring of 2012, where Kevin Garnett was in the midst of a seven-game playoff series with the Boston Celtics and The Weeknd was still an up-and-coming Canadian act on the cusp of explosive success. Garnett and The Weeknd appear in the film, playing this fiction of 2012 which twirls around the reality of their lives and achievements. The Safdies have a great talent for mixing the real world within their imagined ones. Their plots are byzantine and made to make you squirm in your seat. The discomfort is the point, and they allude to a version of New York City that bubbles grossly underneath the glamour. In Uncut Gems, these two worlds smash together with consequences that are no less shocking because of their inevitability.