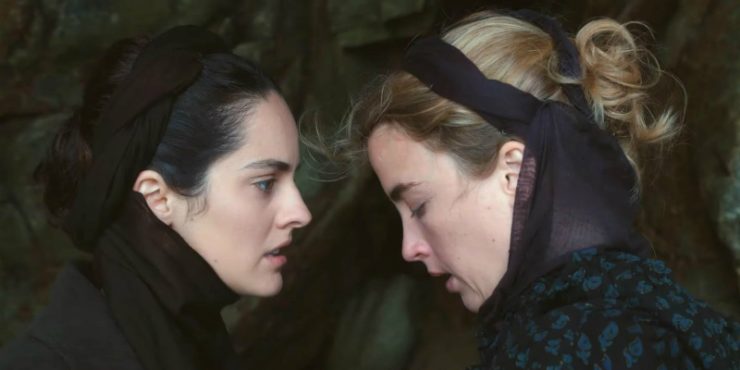 There are few characters in Portrait of a Lady on Fire, and scant dialogue. Feelings are expressed through glances and averted eyes, passion is displayed through slight, nearly imperceptible acts – the touch of a hand, a game of cards. The two women at the center share a feverish love, made more palpable because they cannot be together. In eighteenth century France, many traditions are upheld, and many taboos are forbidden. One of the women is a professional painter with no social obligations, the other is the daughter of a countess promised to a man she has never met. They have much in common, even though it may not seem like it. Director Céline Sciamma chooses not to focus on what they say to each other, but instead to accentuate their emotional upheavals and their devastating heartbreak.

The painter is Marianne (Noémie Merlant), a self-sufficient professional and the daughter of a painter of great renown. She appears to have inherited his skill, but more importantly she has inherited his business, which allows her to practice what she loves without obligations to anyone else. When she’s commissioned by a countess (Valeria Golino), she travels to an isolated island in the West of France. She is to paint the portrait of the countess’ daughter, Héloïse (Adèle Haenel), who is being courted by a Milanese gentleman. The catch, Marianne is told, is that she cannot know she is being painted. She has already warded off other attempts to have her portrait taken, and Marianne must pretend to be a temporary escort to keep Héloïse company for walks on the beach.

Héloïse’s suitor was originally after her older sister, who unceremoniously threw herself from the top of cliff at the notion of being married off to a stranger. Dragged from the convent, Héloïse is meant to take her sister’s place, but the assignment has filled her with anguish and resentment. She despises her mother’s persistence and lacks trust in those around her, including Marianne at first. Marianne tries to ingratiate herself, no doubt impressed by Héloïse’s beauty – her hopelessness hints at an alluring danger. But painting without posing proves difficult for Marianne, whose admiration for Héloïse leads her to drop the charade, and admit her true purpose. Through their intimacy, a more honest portrait is produced and a romance blooms.

Sciamma’s screenplay is simple, sure, but it has a true appreciation for the finality of fate, while still believing in the hope that comes with love. Despite their circumstance, their bond becomes fierce and enduring, too enlightened to be truly extinguished by their societal duty. It also understands the duality within lustful passion and the passion that feeds creation, as the two cycle back and forth, giving the film’s central affair a two-headed purpose: the love fills Marianne’s heart and her inspiration. This says nothing of Sciamma’s camera (cinematography by Claire Mathon), which communicates the expressionism through piercing close-ups and stunning landscapes, many interior scenes lit by lush candlelight.

The performances from Merlant and Haedel are measured but effective, each actress delicate in their portrayal of hidden emotions, the complexities shown through agonized expressions. Their work perfectly complements Sciamma’s filmmaking, which looks for immense beauty under moderate circumstances. It’s telling that these lovers seldom dwell on the tragedy of their situation, only a few scenes touch on the pain that comes with the necessity of their separation. Portrait of a Lady on Fire eschews the tragic, instead for the passion. Their love requires little thought or exercise, their feelings plain and needing little exploration. Neither takes for granted their limited time, and Sciamma’s choice to focus on their love more than their disconnection gives the film a profound power.

There is a supporting character in the film named Sophie (played wonderfully by Luàna Bajrami), the maid in Héloïse’s stately home. She begins the film as a shield for Marianne, against the tempestuous Héloïse, but soon becomes their welcome companion during their growing relationship. Sophie’s role takes on greater significance later in the film, giving the audience a welcome reminder of the plight of women in the eighteenth century, beyond their inability to fall in love with one another. This touch of plot is a perfect example of the excellence of Sciamma’s screenplay, which understands so much about its characters and the world they inhabit. It also is a testament to her directing which bears all of this information onto the audience almost entirely through its powerful imagery.

Written and Directed by Céline Sciamma