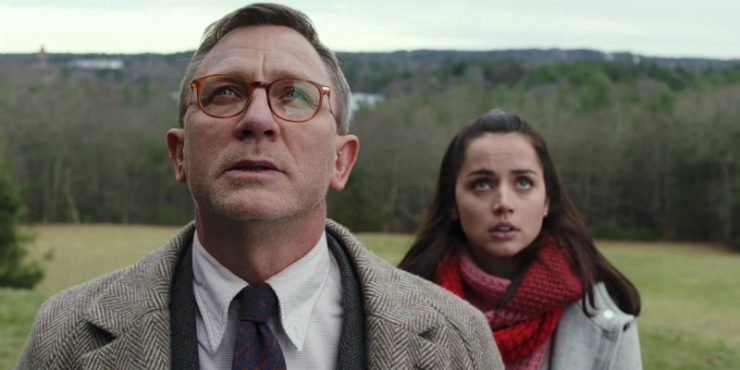 The main detective in Knives Out – Rian Johnson’s masterful whodunit murder mystery – is man named Benoit Blanc. Blanc speaks in a hilariously affected Southern American drawl (at separate points he’s referred to as Colonel Sanders and Foghorn Leghorn, presumably beating the audience to the punch), and is played by the always debonair Daniel Craig. An English actor playing a Kentucky detective with a French name. As you can see, this movie has layers. Blanc himself describes the mystery at the center of the film as “a donut”, a spiraling circle in which the most pressing piece is missing from the middle. As he searches through the donut, what he uncovers is a web of fallacies, logical inventions and misdirections revealing a shocking amount of duplicity.

Blanc is brought in to investigate the death of mystery novelist Harlan Thrombey (Christopher Plummer), a titanically successful literary figure with a sprawl of family members who capitalize, in numerous ways, off of his success. After celebrating his 85th birthday, he’s found the next morning, in the attic of his elaborate mansion, having slit his own throat. Despite evidence of a suicide, Blanc is hired by an anonymous party. The police detectives on the case (Lakeith Stanfield, Noah Segan) oblige the renowned private investigator to look into the details, and suddenly motives pop up for everyone, including the devoted children (Jamie Lee Curtis, Michael Shannon), the flighty children-in-law (Toni Colette, Don Johnson), the pesky grandchild (Chris Evans), and possibly even the nurse (Ana de Armas).

The nurse is Marta Cabrera, a hispanic woman of ambiguous Central/South American origin (in a funny recurring bit, everyone in the family guesses a different country), and is the only person who Harlan seems to actually trust and respect. Her place as a purveyor of the dysfunctional Thrombey clan – as well as a confidante of Thrombey himself – means Blanc has a particular interest in her knowledge. Also, a character tick – she literally pukes every time she even thinks of lying – means he can trust her to be honest, unlike the rest of the family. Troubled by the unsettling nature of Harlan’s death, Blanc becomes convinced that trouble is afoot, and he believes Marta to be the tool that will help him solve the case.

Fresh off The Last Jedi, it was apparent that Rian Johnson could do “whatever he wanted” with a generous studio budget. That kind of “freedom” often comes with caveats for crowd-pleasing sure things, but Johnson is evidently shrewd enough to make a strikingly original film that can appeal to mass audiences. Johnson’s fascination with the machinations of Hollywood genre has shown itself throughout his career; like with his reverse-engineered high school noir, Brick, which moved like a purposely unsolved Rubik’s Cube, or his Star Wars addition, The Last Jedi, which set fire to the self-sustaining mythology, and brought all the fanboys down with it. Knives Out is both a proper homage to the Doyle/Christie mystery tale, and a stirring dissection of the characters that sit at the heart of it.

It also does exactly what you should do with an extraordinary cast, keeping them all in perfect step with every twist and turn, with every shifting allegiance. Johnson’s script is a macabre collection of clichéd family disputes from everything to pride, betrayal, and the mother of it all: money. The Thrombeys agree on very little. Their arguments range from topics of a political and personal nature, oftentimes one can be a stand-in for the other. They all claim to possess independence, or at the very least covet the idea of it, and yet all depend on Harlan to carry them along. This dependence leaves deep-seated resentments and unspoken envy of his power. It’s obvious that Harlan would have loved his death to become the kind of sprawling puzzle that it eventually becomes.

As Blanc is quick to comprehend, Marta is the key to everything that works in Knives Out. Her outsider status within the family gives her a clarity that even she isn’t prepared to really see. These murder mysteries often employ a “noble foreigner”, mostly as a red herring, an exotic flavor mixed within the familiarity of the mystery plot. By placing Marta at the film’s center – at the center of Blanc’s “donut” – Johnson is playing a radical trick on the audience’s expectations of guilt and innocence. Furthermore, Ana de Armas’ performance is a perfect piece of acting, a thorough portrayal of the burden of innocence and the tragedy of virtue. It’s her sincerity within the ocean of deceit that makes the tension throughout Knives Out pop so fiercely.

More can be said – about Curtis’s brilliance or Craig’s audacity, about the alacrity of the film’s jigsaw plot, about the luxurious texture of Chris Evans’ white sweater – but few films could benefit from knowing less than Knives Out. It shares much with Bong Joon-ho’s Parasite – a villainous family, a house of shocking secrets, an innate distrust of elites. Both films have a pinpoint script, a tremendous cast and a director with complete control over the tone and measure of his story. That the film is a hit proves that there is definitely an audience for films with this kind of intelligence and insight, and at least this time, that audience is coming out to see it.

Written and Directed by Rian Johnson