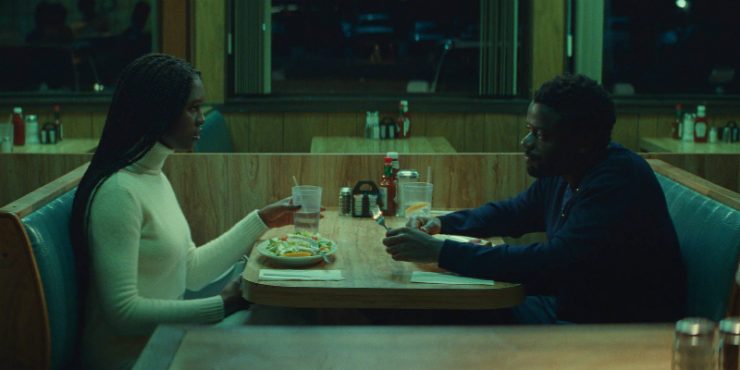 The two characters at the heart of Queen & Slim don’t really like each other in the beginning. They’re on a Tinder date and they’re eating in a run-of-the-mill Cleveland diner. He orders breakfast (his eggs are cooked incorrectly) and she orders an unappealing salad. Why on Earth would this be a spot for a first date? “It’s black-owned” he explains to her. It’s not the most satisfactory answer he can give – she still sits coldly on her side of the booth – but it’s enough for her to drop the subject. The “Queen” and “Slim” of the film’s title aren’t birthed until later in the film, when he drives her home, but is pulled over by a police officer. The cop is forceful and terse, looking for conflict. When he doesn’t get it, he creates it, leading to a confrontation that ends with Slim shooting the officer in self-defense.

Slim is played by Daniel Kaluuya, a British-born actor who has spent the last few years truly flourishing within challenging American dramas (he was Oscar-nominated for his performance in Get Out). Slim is a simple man, his beard and hair slightly unkempt, though it doesn’t distract from his charm and handsomeness. It’s obvious early on that he’s not used to a woman like Queen (Jodi Turner-Smith), whose job as an attorney has hardened her resolve but also turned her cynical. Her limited patience can become argumentative quickly, and it’s when she becomes angry with the police officer that things ultimately turn deadly. Ever the merchant of chaos, the cop shoots her in the leg before Slim is forced to shoot him.

What follows is a road trip film about two fugitives whose act of self-defense inspires a nationwide manhunt and extensive media attention. Their mythology also builds throughout the black community, which allows them to pass from place to place, keeping their whereabouts a secret. First they go to New Orleans to stay with Queen’s uncle Earl (a funny, surprisingly sweet Bokeem Woodbine), and after that, they plan to go to Florida where they hope to get a plane out of the states. In constant fear, Queen and Slim still find time to learn about each other, as their first date extends into a run for their lives. A warm but complicated romance blooms, but the specter of tragedy is always hanging above them.

This is an incredibly provocative film, in which screenwriter Lena Waithe is attempting to recast the common movie fugitive narrative (Bonnie and Clyde being the best and most obvious example) through the lens of black oppression. Director Melina Matsoukas gives the film rich, vibrant colors. Often, Queen & Slim lingers on images that surround our protagonists, images meant to speak toward different corners of black iconography, whether it be blues music or a turquoise luxury car with extravagant rims. As violently charged as their trip may be, Matsoukas connects them with the beauty that surrounds them, and that beauty is always involving blackness.

I can understand those who argue that Queen & Slim prioritizes style and expression over a more nuanced realism when it comes to American oppression of its black citizens. At times, Waithe’s script gets tangled up in the kinds of provocations it means to inspire. At other times, Queen & Slim feels the need to overcomplicate itself with plot. Its best moments are its most visual, where Turner-Smith and Kaluuya’s connection is allowed to evolve into something more substantial than that initial diner date would have suggested. But even that love story feels forced. Kaluuya is extraordinary here, his most Everyman part, but also a work of delicacy and patience. Turner-Smith is a welcome scene partner, startling effective in her film debut.

What surrounds them is a film that is meant to be complex – how could it not be? – but seems to have little interest in solving itself. Its main focus seems to be on the images themselves, which are striking, often beautiful. This is, to me, an incredibly touching way to look at filmmaking, and one that works because Matsoukas and her two actors are so sincere in their efforts. This is a winning film that doesn’t totally work since its ideas are often found undercooked, but its beauty is unmistakable.