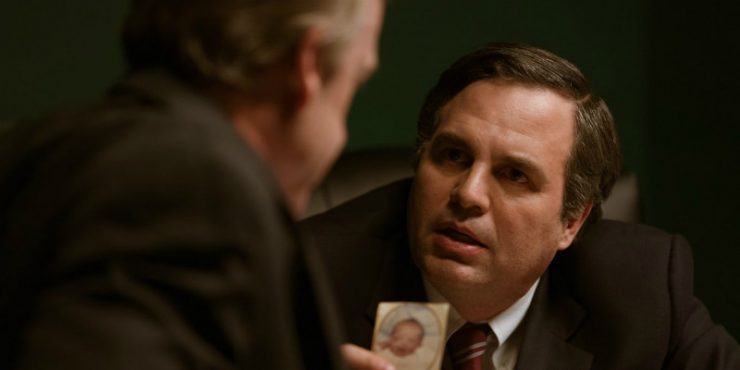 Dark Waters, on the surface, may seem like a departure for director Todd Haynes, whose films more often cover transgressive subject matter with striking, conceptual filmmaking. His latest is a legal thriller, a ripped-from-the-headlines story about a corporate lawyer who switches coats when he learns of the harm a major chemical company is inflicting on a small American town. Haynes crafts Waters in the fashion of the thrillers of the 1970’s, and may remind some of the paranoia in films like The Conversation or All The President’s Men, but Haynes uses that tension for something real: the committed and continuous harm of the American people by major corporations.

The screenplay (by Mario Correa and Matthew Michael Carnahan) is based on a Nathaniel Rich article about a lawyer named Robert Bilott (a profoundly sincere Mark Ruffalo) who works for a corporate defense firm and has just made partner. When he is approached by a farmer named Wilbur Tenant (Bill Camp), Robert plans to blow him off, but Wilbur mentions that he’s from Parkersburg, a city in West Virginia, where Robert happens to be from. His own grandmother still lives in Parkersburg, and when he visits her, she reminds him of his former relationship with the Tenant farm. Finally convinced, Robert visits Wilbur and is given a horror show of dead cows, all with swollen organs and rotted teeth, more a graveyard than a farm.

Possessed with a sudden urge to do right by Wilbur, Robert decides to file a routine lawsuit against the titanic DuPont Chemical Company, in an attempt to find information on their Parkersburg factories and whether or not there was some incompetence that led to the trouble at Tenant Farm. What begins as compliance, quickly turns to hostility, as DuPont is caught off guard by Robert’s thoroughness (it’s taken for granted that Robert’s firm has no interest in inflicting public harm on a major American company), and as the thread begins to loosen on DuPont’s practices, the company begins putting more and more pressure on Robert and his firm to fall in line. Armed only with his resolve, Robert decides to face down DuPont, who have all the resources in the world.

The pressure and threats from DuPont trickle down throughout Robert’s life, including his boss, Tom (Tim Robbins), his wife Sarah (Anne Hathaway), and even at times his own clients, all frustrated with Robert’s dogged efforts bringing nothing, and the droning, decades-long process toward justice. The years tick by methodically throughout the film, Haynes conscious to note the enormous lengths of time that judicial bodies and corporations use to stiff arm victims who need immediate relief. Robert feels uniquely qualified to put up this fight, since he used to be on the other side, but his determination is hardly enough as he frequently is buried under bureaucracy and deadened by frightening data. His health begins to take a turn for the worse.

Ruffalo himself is a producer on the film, and anyone familiar with the great actor’s political stances may sense that this is more Ruffalo’s film than Haynes’, but that shouldn’t discount the director’s strong hand here. Always a master of genre subversion, Dark Waters is a stirring continuation of that, allowing the director to dig into the thriller genre without the need of a twisty screenplay. The paranoia that directors like Coppola and Pakula used so well in the 70’s is utilized here, but instead of hidden ghosts, the characters are haunted by empirical evidence of horrifying malfeasance. The degree of damage DuPont inflicted on not only Parkersburg, but the entire United States, is stunning in its totality.

This is a remarkably good natured film, which instills itself with the responsibility of imparting a moral imperative upon its audience. It’s explicit political nature isn’t off-putting because it puts things in plain terms: when corporations commit horrible crimes, there is an entire full-proof system set up to protect them. It’s also stunningly well-written and well-acted. Ruffalo, always dependable, furthers his reputation as a generous performer whose goal is almost always to serve the material and not himself. Around him, Robbins, Camp, Hathaway as well as Bill Pullman and William Harper Jackson, all shine brilliantly.

Todd Haynes is one of our great living directors, one whose every film requires full attention. That he can surprise people by making such a solid procedural film is a testament to how adventurous and unpredictable his career has been. Dark Waters should be mentioned among his best, an unflinching David and Goliath story that believes in the strength of a single man’s will, even while recognizing the toll that a fight like that can take. The movie hopes to inspire more Robert Bilotts, more people unafraid to task themselves with the harsh, time consuming processes that companies like DuPont hope to intimidate people with. At the very least, it hopes to get you to pay attention to the tools that elites have at their disposal.