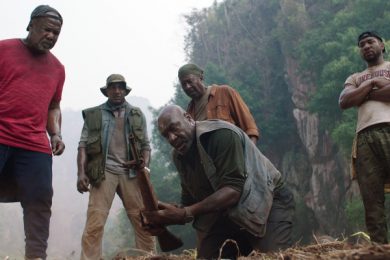 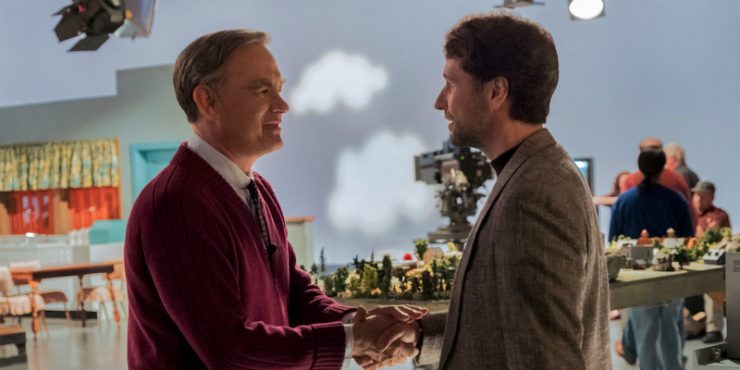 The casting of Tom Hanks as Fred Rogers seems a bit like a stunt, a stacking of one famously decent person atop another. The announcement of Hanks’ casting in Marielle Heller’s A Beautiful Day in the Neighborhood was met with an odd burst of stupefied awe, as if such an obvious choice gave people an uneasy feeling. Myself, I don’t think Hanks exactly fits into Rogers’ shoes as well as it might appear, not the least of which because their forms of decency don’t entirely overlap. Hanks’ Everyman delivery is a different thing entirely from Fred Rogers’ earnest, gentle persona. Of course, this kind of thing would matter if Heller were making a rather straightforward biopic, but that is not what she’s doing here.

In three features, Heller has proven herself to be a master constructor of these kind of Trojan horse narratives where very familiar stories bring with them fresh, unforeseen complexities and detail. If last year’s Can You Ever Forgive Me? was a probing dissection of middle-aged depression in the guise of a comedy caper, Neighborhood is a somber meditation on the existential struggles to find empathy and forgiveness – pretending to be a Mr. Rogers movie. The film is inspired by a Time Magazine article by Tom Junod, who claims the time spent with Rogers changed his perspective on life. This is a common refrain from those who’ve come in touch with the famously affectionate children’s show host.

In the film, the journalist is named Lloyd Vogel (Matthew Rhys), whose award-winning career has garnered him few friends after his stories tend to shine light on the negative aspects of humanity. His editor (Christine Lahti) puts him on assignment to interview Rogers for an issue on “heroes”, hoping this may soften Lloyd’s reputation. Lloyd could use the lighter material. Him and his wife, Andrea (Susan Kelechi Watson), having just had their first child, get no help from Lloyd’s estranged father, Jerry (Chris Cooper), who arrives after decades to make amends. Unwilling to accept Jerry’s olive branch, the anger from Lloyd’s past rises back to the surface, and he dives into his work to avoid his obligations.

Fred Rogers’ charms don’t move Lloyd initially – he can’t grasp the TV personality’s perpetual optimism, or his unending need to ease those who seem troubled. Lloyd’s problems are apparent, and his skepticism in Rogers only makes Fred more eager to find the source of the sadness. It’s through the prism of Rogers and his show – including the puppets King Friday and Daniel, the Striped Tiger – that Lloyd is finally able to put words to his hostility and mistrust. Rogers, whose career was consumed with helping children cope with their uncertain feelings, proves himself equally apt at dealing with adults, helping Lloyd come to grips with all the feelings fighting inside of him.

This film comes to us over a year after last year’s Won’t You Be My Neighbor?, Morgan Neville’s documentary which focused on the career and overarching message of Fred Rogers, and his television show, Mister Rogers’ Neighborhood. That film is a much more traditional biographical portrait, which covered his history, his family, even his occasional flaw, and it powerfully diluted Fred Rogers’ life thesis of kindness and attention through that biography. Heller, a much more conceptual artist, deconstructs here, using the foundations of the beloved television show to weave in and around Lloyd’s life. She’s unafraid to approach something close to surrealism, tinkering with reality in an attempt to explore the center of Lloyd’s melancholy.

Certain moments in Neighborhood work better than others, though what Heller is attempting here feels incredibly audacious. She has a very elastic view of what films can be, and much like Mr. Rogers’ television show, she is unafraid to tackle the more dangerous aspects of Lloyd’s emotional landscape using simplistic, straightforward language. At times, this is profoundly effective, detailing how grief and a lack of forgiveness can perform a cyclical, parasitic dance within your psyche. Other times, it feels occasionally like pop psychology, with shortcuts to catharsis. Lloyd’s monumental emotional shift throughout Neighborhood is a tricky one, and the film only stumbles about half the time.

By now, you may have gleaned that this is less a Fred Rogers movie than a Lloyd Vogel movie, who himself is a fictional construct based on another, real journalist. Rogers, instead, is an ideal of how human beings can behave. Despite several arguments against it throughout the film, A Beautiful Day in the Neighborhood sanctifies Rogers, never really allowing the character (or Hanks’ performance of him) to become a fully realized human being. Heller shows herself again to be an expert cultivator of terrific ensemble performances, but it’s hard for the audience to get a real sense of Rogers’ effect on Lloyd because Rogers never feels like anything other than an angelic figure, too perfect to truly understand.

I don’t doubt that this is an accurate portrait of Rogers and the effect that he left on people. Perhaps, if I didn’t have Won’t You Be My Neighbor? from last year, I wouldn’t expect a slighter imperfection from a man who came to symbolize immovable grace and wisdom. The film is an exciting experiment in some ways, an incredible display of effective, naturalistic performance (the film is filled with those kind of small, perfect supporting performances from the likes of Tammy Blanchard, Enrico Colantoni, and Maryann Plunkett), as well as an interesting display of creative construction, using the dioramas from Rogers’ show to transition from scene to scene. But a proper Mr. Rogers movie, this is not.