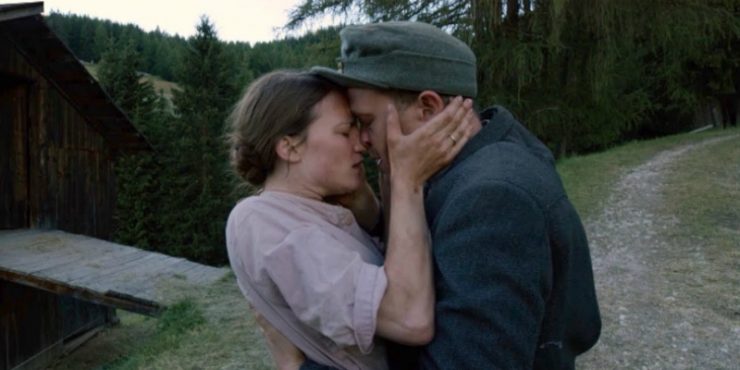 A Hidden Life is the sixth film from rarified filmmaker Terrence Malick this decade. He had made only four total in the four previous decades. This burst of prolific activity has had its ups and downs, and a lot of these movies (even the good ones, like To The Wonder) have worn on the audience’s patience, who feel like the cup hath runneth over and his artistry has given way to pretension. The Tree of Life in 2011 was such a revelation, such an astonishing reinvention of what movies and cinematography can do, that it was probably unfair for us to judge what followed on that standard. His filmmaking has never fallen off since Tree of Life, though our responses to him certainly have.

Malick has always preferred his films be built on strong imagery as opposed to strong narrative. The machinations of plot are so uninteresting to him, and at times it seems like he is going out of his way to edit them out. Often his films nestle within a dreamlike atmosphere, where feeling and meaning are evoked rather than stated. A Hidden Life is distinct within Malick’s output because it is based on history. It is telling the story of Franz Jägerstätter (played beautifully by August Diehl), an Austrian farmer during World War II, who refused to swear a loyalty oath to Hitler, and in doing so, had himself arrested, imprisoned, and eventually executed (oh, I’m sorry – spoiler alert).

In Malick’s telling (he has the sole screenwriting credit), Franz’s stance as a conscientious objector is less about morality and more about spirituality. A proper Christian, Franz sees the Nazi party as a plague of sin, and cannot bring himself, even for his family’s sake, to even feign allegiance to them. At three hours, Malick’s film has plenty of time to ruminate on the mysterious complexities of God, and how one could ever reconcile his existence next to the unquestioned evil of the world. We also touch on the plight of Franz’s wife, Franziska (a strong Valerie Pachner), whose home life is upended by the absence of her husband, and the resentment of their village which is filled with Hitler loyalists.

A Hidden Life may like to call itself a film about courage and the power of even small acts of resistance, and indeed, many of Franz’s enemies use this logic against him: does he really think his actions will have any effect on the world? (Joke’s on them; he got a movie!) In practice, the film is much stronger as a meditation on humanity when the institutions we believe in crumble before us. Many characters in this film, even some higher ranking Nazi officers, find themselves undone by crisis within the events of this film. As an argument for faith against the crushing boot of oppression, the film is quite touching, even while allowing that that same strength of faith can be what led many Nazis to continue even if they knew their behavior was wrong.

It is much easier to say that A Hidden Life is too long than it is to specifically state what inside this gorgeous film should be cut. Every image feels indispensable to me, even while admitting that Malick does give in to his more ponderous practices (whispery voiceovers, narrative redundancies). His camera is so probing and unpredictable (cinematography here is done by Jörg Widmer), crafting excitement purely from his directing unlike any other filmmaker. His use of steadicam and deep focus feels unmatched, creating a feeling somewhere between verité and a dreamscape. It’s so obvious from looking at A Hidden Life that films, for Malick, are a spiritual experience. Spending time in his cathedral is often worth the price of his indulgence.

Written and Directed by Terrence Malick