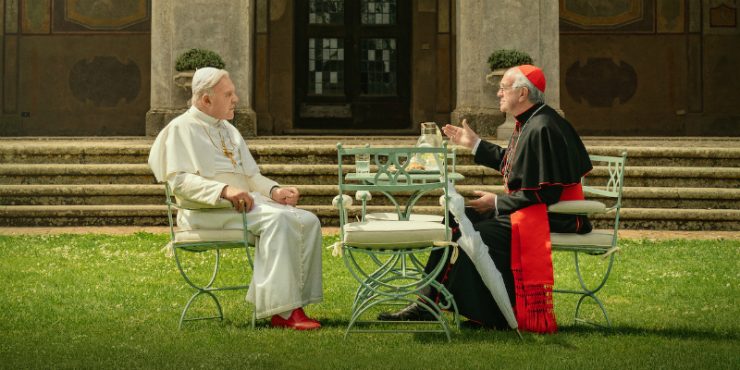 The Two Popes finds a lot of humor within the humanity of its title characters, who despite their papal designations, are still left to deal with life’s small humiliations, such as ordering plane tickets over the phone or eating margherita pizza without plates. It’s hard to imagine a conversation about The Beatles going any more sideways than the one that goes on between Francis and Benedict XVI. Director Fernando Meirelles – the skilled Brazilian filmmaker whose movies are often more thrilling than this latest offering – stresses these points. Their humanity in the face of their holy positions – their general ordinariness – only adds to the mercurial nature of Catholic practices, which is preoccupied with an opulence that belies its scriptural teachings.

In the early 2000’s, Meirelles was in the vanguard of directors relying mostly on handheld, documentary-style cinematography. Meirelles shows here that this is still a major part of his filmmaking style, long after it has gone out of fashion, and despite the fact that it makes little sense with the subject matter here. The script, by Anthony McCarten (a dogged producer of mediocre prestige plays like Darkest Hour or The Theory of Everything), is about the testy hand-off between the staunch conservative Pope Benedict XVI (Anthony Hopkins) and the humble, reform-minded Pope Francis (Jonathan Pryce). Their long, rambling conversations speak to a diversity in Christian interpretation, as well as a gulf between the two men’s perspective on such a powerful position.

It’s startling to see Meirelles’ verité approach to this subject matter, even if it does add an air of looseness between the two actors who take to their respective parts splendidly. Benedict, born Joseph Ratzinger, is a German man long-thought to be the heir apparent to the long-standing John Paul II. Ratzinger shares John Paul’s strident distaste for permissivism, but he lacks none of the popular pope’s charms. He certainly doesn’t possess the populist appeal of Jorge Bergoglio (the eventual Francis), whose roots in the poor neighborhoods of Buenos Aires makes him a natural enemy to the Catholic church’s material indulgences. Ratzinger covets the position of Pope, but finds the position quite lonely upon receiving it. His only enthusiasm comes from hoping to keep the papacy away from those he deems radical reformers like Bergoglio.

Meirelles’ insistence on making the film a docudrama certainly adds an interesting layer, even if it’s of the head-scratching variety. But The Two Popes works because of Hopkins and Pryce, whose repartee delves deep within the two characters. Bergoglio rejects the position of Pope because he perceives himself as lacking profundity. He doesn’t understand that it’s that humanity that makes him so right for the position. Ratzinger believes he possesses the authority to command the Catholic church, mistaking strident belief for a standard of faith. The Two Popes makes great drama out of Benedict’s eventual resignation and Francis’ subsequent rise, as the two men begin to learn about themselves and what does (and doesn’t) make a good pope.

I’ll admit that this is the best rendering of McCarten’s tick for films about Great Men of History. Having two terrific actors who are so committed certainly helps. The film flashes back often to a younger Bergoglio (played by a great Juan Minujín), and McCarten accounts for why the Argentine feels unworthy of being pope. These scenes make the most sense within Meirelles’ milieu, and tie in the complicated (to put it mildly) politics of Latin America that has fueled the fervent nature of the director’s earlier films. How they flow into the scenes with Hopkins and Pryce is hard to say. Feels uneven to me, even as they seem to work quite well on their own. The muddle here feels unfortunate, but it does not totally take away from the joy of getting such good acting as we get from the two leads.