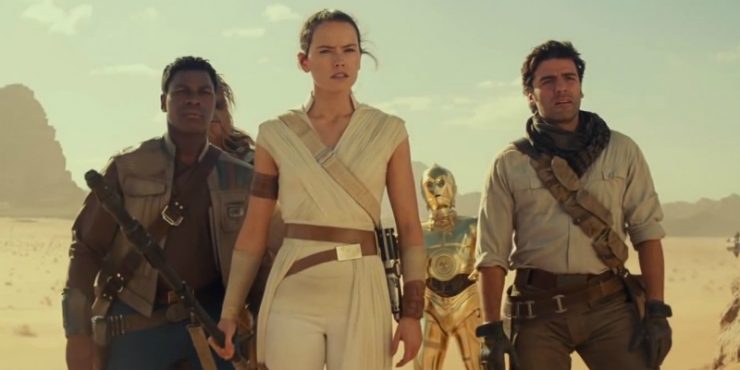 **My wife – a noted Star Wars fan – has told me that I should include a SPOILERS warning at the beginning. So here is that. Proceed with caution.**

It’s apparent that Rian Johnson was taking the Star Wars films in a direction that they (meaning Disney, director J.J. Abrams, and the heinous horde of internet trolls) were not prepared to go. Johnson’s The Last Jedi from 2017 suggested an inclusive aspect to this universe which undid the series’ narrative dependence on fate and unknown lineage. A lot of people didn’t react well, though a box office intake over over $1.3 billion suggests a historically large popularity. The Rise of Skywalker doesn’t have the same rebellious spirit, and feels weighed down by the burden of conclusion. In trying to land this new trilogy, Skywalker makes a good effort toward supporting everyone’s hopes and aspirations, without realizing that something we may not have been expecting would have been more satisfying.

Of course, The Last Jedi didn’t have the responsibility of tying loose ends, nor did it have to deal with replacing its director. When Colin Trevorrow left the project and was replaced by Force Awakens director J.J. Abrams, it should have been clear then that The Last Jedi‘s breakthroughs would not be capitalized on. Abrams is a filmmaker who can readily mimic the skill and heart of Spielberg, but none of the intelligence (to be fair, Trevorrow is an objectively worse version of the same thing), and forcing him in here when he didn’t expect it gives Skywalker a lot of obvious hiccups. Not the least of which was losing the on-set presence of Carrie Fisher, whose Leia was meant to be a linchpin to Skywalker‘s entire plot.

Leia’s loose character arc is spliced in here using past footage and alternate takes from the previous two films. The effect is awkward, though awkward in a way that immediately makes you sympathetic to the film’s dilemma. Fisher’s choppy inclusion is shoved in within the continued journey of Rey (Daisy Ridley, whose performance has improved with each successive film). Along with ex-Storm Trooper Finn (John Boyega) and high-ranking Resistance commander Poe (Oscar Isaac), Rey journeys through the endless galaxy hoping to stop the fascist First Order. Of course, they’re supported by presence of their droids C-3P0, R2-D2, and BB-8, as well as the giant, good-hearted wookie Chewbacca.

First Order leader Kylo Ren (Adam Driver) is hot on Rey’s trail, unsure of whether he wants to kill her or win her over to his cause. He gets a boost from Emperor Palpatine (Ian McDiarmid), who has apparently risen from the dead solely to give Kylo Ren the job of killing Rey once and for all. The force bond between Rey and Kylo Ren continues to be strong, as neither understands the strength of their cosmic connection. Around them, the fight between the Resistance and the First Order continues, with Palpatine adding an extra degree of heartless cruelty to the First Order’s already ruthless reign. With the resistance depending on Rey and the First order depending on Kylo Ren, the complications of their relationship comes to a head, and an answer to their questions must be found.

The Rise of Skywalker‘s betrayal of The Last Jedi‘s principles feels without malice even if that doesn’t discount the disappointment. All of Skywalker‘s major plot points feels like a direct reaction to everything Rian Johnson had built. The film’s script is from Abrams and Chris Terrio (who won an Oscar for Argo and has since become ensnared in the purgatory of DC comic book films), and functions mostly as a move against singular vision. The filmmaking becomes much broader in style and the story becomes much narrower in originality. More than anything, it seems to relish how indebted its story is to Star Wars films from the past, and makes the mistake of relying more on sentimentality. Palpatine aside, it is hilarious how much Skywalker relies on the concept of bringing a character back from the dead.

I was iffy on The Force Awakens, because despite its enthusiasm about itself, I felt duped. They had given us the exact same story in a newer, shinier package. The Last Jedi had briefly convinced me that perhaps there was some interest, within Star Wars films and fans alike, in attempting something different. The Rise of Skywalker has a sharp melancholy, and its self-awareness certainly separates it from the other trilogy finales, Return of the Jedi and Revenge of the Sith. That said, Skywalker regurgitates more of the same, and furthermore, it seems to want credit for doing so. There is some remarkable visual effects work, strong performances, and for those who have spent decades following this series, I can understand having an emotional response. But the argument cannot be made that this is anything unique.