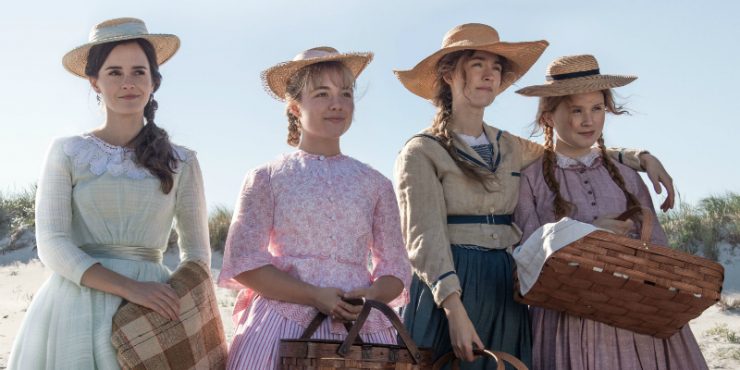 There’s a reason Louisa May Alcott’s beloved novel, Little Women, is so often adapted. Its portrait of an American family rings true today, even as its story takes place over a century and a half ago. George Cukor gave us our first great film version – with Katherine Hepburn playing Jo, no less – but Gillian Armstrong’s version in 1994 proved that this incredible story is improved with the eye of a female director. This time, it’s Greta Gerwig, two years after her directing breakthrough, Lady Bird, who gives her version of Alcott’s famous story. It would be hard to make a bad version of Little Women, but it’s even harder to make what Gerwig accomplishes here: an historical tale that does right by its characters, while completely consuming the audience in their emotional experience.

There’s Jo (Saoirse Ronan), a brash tomboy who yearns for a career as a writer and has a vocal disdain for the institution of marriage. There’s Meg (Emma Watson), the oldest sister, whose aspirations are the exact opposite of Jo’s, finding great fortune in living a contented life in their home of Concord, Massachusetts. There’s Beth (Eliza Scanlen), a shy, quiet girl with a big heart and a great ear for music. Then there is Amy (Florence Pugh), the youngest March sister, whose petulance is matched by here precocious nature. The sisters run into mischief, both with each other and others. They share admirations and distastes, build relationships and resentments. Their experiences occasionally overlap, but more than anything, they find their true individual selves – with each other’s help, of course.

The sisters are molded greatly by their mother, Marmee (Laura Dern), who teaches them the importance of giving and sacrifice, especially during the hardship of the ongoing Civil War – in which their father is participating as a Union soldier. She has the help of a housekeeper, Hannah (Jayne Houdyshell), but is otherwise raising her children alone. There is the presence of Theodore “Laurie” Laurence (Timothée Chalamet), their cocksure neighbor who lives with his gruff but kind grandfather, Mr. Laurence (Chris Cooper). Mr. Laurence is quite wealthy, and while the younger Laurie shares in that wealth, his interests lie mostly in spending time with the March sisters, especially Jo.

Each sister seems to possess an innate artistic talent – writing, acting, drawing, performing – though not all of them seem to have the drive or interest to truly pursue it. Jo’s writing fuels her entire existence, and she simply cannot fathom that Meg would rather marry than take her chances in becoming a famous actress. Amy takes painting lessons in Europe and bemoans anything she produces that is less than perfect, while Beth’s uncanny talent with the piano is hardly heard outside of empty houses. Gerwig does not apply triumph or tragedy to any of their journeys, embracing Alcott’s intention that each of them finds their own separate peace in the diversity of their experience.

As a follow-up to Lady Bird, this is truly astonishing. It’s hard to imagine two films so disparate in style and subject matter, yet Gerwig further proves a legitimate handle on the subtle joys of the human condition. Little Women has no shortage of sorrow – it’s early reputation as a tear-jerker is not undersold – but the film is not melancholy. Gerwig’s screenplay shifts the chronology, telling a lot of the story as a series of flashbacks, which allows its understanding of emotional evolution to really flourish. The structure reminded me of the short stories of Alice Munro, where the shifts in time beautifully highlight just how much we’re are able to change over time, and more solemnly showcases just how much we stay the same.

Gerwig shifts from the static grain of Lady Bird to a more lush cinematography here – with the help of cinematographer Yorick Le Saux. Shooting on 35mm film, you can actually see her cinematic world expanding, as the camera moves around crowded rooms, and even more crowded conversations. It’s a testament to her directorial ease that the film never gives way to claustrophobia, even as her characters eat up the scenery. Working again with editor Nick Houy, Gerwig pulls off her time-hopping structure, perfectly blending our parallel timelines towards a truly effective conclusion. To shift from the choppy sparseness of Lady Bird to the structural complexities of Little Women feels to me a radical filmmaking jump, and it’s just so impressive that a filmmaker can do it so seamlessly.

The film’s cast is remarkable; a true example of generous ensemble acting, free of the kind of distracted showcasing that these kinds of period pieces could lend themselves towards. It seems to me truly incredible that Saoirse Ronan’s decade-plus career has been so spotless and that she is only twenty-five years old. Her Jo is the heart of the story, the rebellious spirit that drives its characters into their fated destinations. Ronan is perhaps not as scene-grabbing here as she was in Lady Bird, but the degree of difficulty is higher, her responsibilities to the rest of the cast more dire. It’s Ronan who everyone takes their cues from, and I can’t imagine the film would be as splendid if she wasn’t as good as she is here.

The rest of the cast each get their moments to shine, especially Pugh, who’s given the particularly difficult task of playing the peckish Amy over a wide range of ages. After Midsommer and this, Pugh’s year has been a fruitful one, where her talent should be considered undeniable. Meryl Streep, who gets a handful of short but important scenes as the March sisters’ rich, tactless aunt, makes her moments felt, sprinkling a hardened cynicism across the film’s sprite cheerfulness. This feels like a perfect film, one where its cast and crew were truly one in their intentions and executions. One would think that there are only so many ways one can tell a story, but Gerwig’s Little Women further proves that if you get the right one, the opportunities are endless.

Written for the Screen and Directed by Greta Gerwig