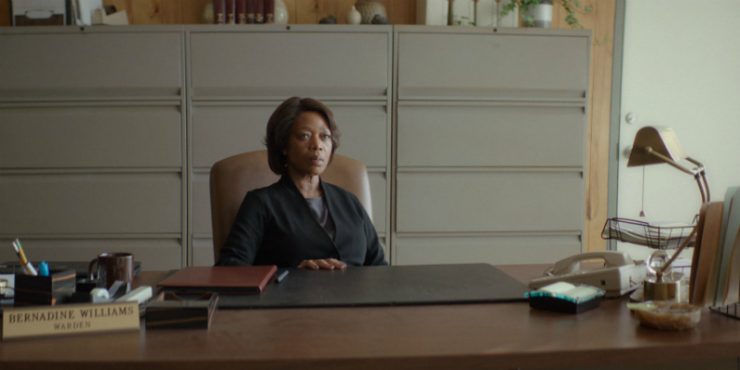 Dramas about capital punishment should not be easy to sit through, but even in this regard, Chinonye Chukwu’s Clemency stands out. This slow burn feature focuses, with great patience and clarity, on the rippling nature and the harm done by state executions. Our main vantage point is a prison warden named Bernadine Williams (a truly exceptional Alfre Woodard), who has overseen twelve executions. The position, which she’s held for some time and has garnered her an unwanted, unquestioned reputation, is beginning to take its toll. Bernadine is a firm believer in the system she oversees, a staunch follower of the rules that comprise the carceral state. If she didn’t, how could she possibly live with herself?

Bernadine rejects the tag of villain, because she knows the amount of effort she puts into respecting the men in her prison. Her refusal to disavowal her responsibilities – no matter how emotionally and mentally taxing – is proof of her commitment. Things begin to change when an execution goes sideways, and a procedure that is meant to be painless and uneventful is botched by a series of oversights and incompetence. The event is not Bernadine’s personal fault, but she knows enough to know that if everyone had been on top of their tasks – including herself – the macabre scene would not have happened the way it did. The event brings unwanted scrutiny upon her prison in the wake of another upcoming execution, with a much bigger profile.

Anthony Woods (Aldis Hodge) is a young black man sentenced to death in the killing of a police officer. His dogged attorney, Marty Lumetta (Richard Schiff), is quick to point out several discrepancies in the case’s evidence as well as the unreliability in witness testimony. Woods’ cause has stirred media attention, and crowds of protestors chant outside the prison on a regular basis. Woods protests his innocence, but the series of failed appeals has left him emotionally empty, and he escapes silently into himself. This disturbs Bernadine, who despite the judgment handed down, prefers her inmates to find peace. Her obvious sympathy falls short of believing his innocence – not that she thinks he’s guilty, but she can’t seem to look at his case objectively without jeopardizing what she will have to do.

This is a political film, even if it does put nearly all its focus on its characters. Its unflinching look at the American prison system, which prioritizes dehumanization over rehabilitation, is wearying. This is the second feature from Chinonye Chukwu, and it showcases a deftness of how to frame and light stories of physical and emotional isolation. Her film is blanketed in shadows (perhaps too many shadows?), with heightened contrast only in the scenes inside the prison, where Chukwu makes good use of the blinding whiteness of the bars and uniforms against the color of Anthony’s (and Bernadine’s) skin. Her dialogue is free of moral grandstanding, but her powerful, provocative imagery leaves us no doubt in its stance.

Clemency had its premiere at Sundance nearly a year ago. Since then, there has been plenty of writing praising the powerful work from Woodard here. Even then, it must be said that Woodard is impossibly good. Her Bernadine, who is methodically losing strands of herself as the days of her muted existence tick by, clings to all she can to keep herself together. Her husband, Jonathan (Wendell Pierce) is concerned for her, and should be, as their marriage starts to buckle under the immense pressure. Chukwu channels many of the film’s heavier moments into wordless close-ups, which Woodard delivers on with harrowing presence, channeling the haunting work of Delphine Seyrig in that other masterpiece about female unraveling, Jeanne Dielman 23 quay du Commerce 1080 Bruxelles.

Burying Clemency with an at-the-buzzer release after Christmas hoping for awards season buzz is probably the biggest misfire this year for growing independent distributor Neon (it should be said that they have done a terrific job in rolling out the release for Parasite). I’m not sure when is the right time to release a film like Clemency, and expecting sizable box office returns in any season would probably be a mistake. Clemency has probably lost out on a good number of end-of-year lists because of it, and perhaps the awards potential for Woodard has stumbled. It’s a real shame, even if it is foolish to judge a movie as grave as Clemency on its performance in the arbitrary circus that is awards season. This is a film that will find its audience over time, and it’s puzzling that Neon thought that four days before New Year’s Day would be enough time for an audience to find it.

Written and Directed by Chinonye Chukwu