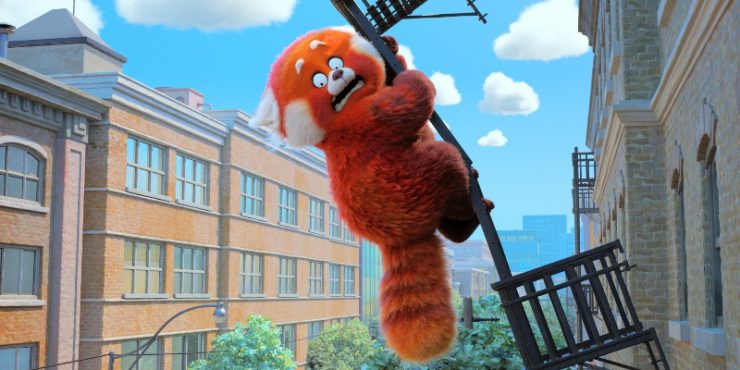 The marriage between Pixar and Disney has turned shaky. Pixar was once the heavy-hitter of Disney’s arsenal, providing both the massive box office returns the studio is accustomed to and consistent high marks on the Tomatometer. It was commercial and prestige; a guaranteed Oscar win and #1 movie of any given weekend. That ended in about 2010, where a decade and a half of Pixar dominance stepped aside for the re-emergence of Disney’s princess-making brilliance (Frozen and Moana doing a lot of the heavy lifting), and now Pixar has become a feeding ground for Disney’s streaming service, Disney+. Both Soul and Luca were given direct-to-streaming releases at a time when COVID precautions were at their highest. Turning Red‘s designation to the service felt deliberate (not even a single theater will be showing it in the US) and a provocation to all who love Pixar’s output.

Which is a shame, because Turning Red is probably Pixar’s best film since 2017’s Coco, which was another film that didn’t simply project a non-American culture, but fully immersed itself inside of it. Turning Red takes place in Toronto in 2002, where the pop charts are being dominated by 4*Town, a collection of sculpted, harmonizing young men whose catchy hooks and dashing looks send young girls into a frenzy. One of those girls is Meilin (voiced by Rosalie Chiang), a Chinese-Canadian eighth grader with supreme confidence and an unimpeachable student record. Her and her friends (a varied and hilarious trio voiced by Ava Morse, Hyein Park, and Maitreyi Ramakrishnan), worship the pop group and dream of catching them on the Canadian loop of their latest tour. There’s only one issue: Meilin’s mother, Ming Lee (Sandra Oh).

On the surface, the mother-daughter relationship seems perfect. Meilin (or “Mei Mei”, as she’s often called) loves helping Ming Lee with chores around the house, watching Chinese soap operas together on the couch, and intaking the exquisite food of Jin (Orion Lee), Meilin’s father. Meilin even works in the family’s Chinese temple, which takes in tourists to tell stories of the Lee family heritage, which includes worshipping Red Pandas, a token from their ancestors. Meilin’s dutiful committment makes her the perfect daughter, but Ming Lee’s overbearing pursuit of her perfection begins to rub uncomfortably against Meilin’s new-forming interests in non-Lee endeavors. When Ming Lee refuses to let Meilin go to the 4*Town concert, the daughter finally erupts with anger and, after a night of frightful nightmares, she wakes up discovering that she herself has turned into a giant red panda.

The shape-shifting, mother-daughter nature of Turning Red‘s plot might remind some of another Pixar film, 2012’s Brave, which was also about a strict matron facing off against the budding independence of an adolescent girl. In that film, it’s the mother that gets transformed (into a bear) after the daughter makes an ill-suited bargain with a witch. In Turning Red, Meilin’s red panda-fication is an inevitability, an inconvenient reality for all Lee women, thanks to the work of their ancestors. Meilin learns all of this only after she’s grown ten times her size and is covered in red fur. Meilin is not a permanent red panda. It is only when she struggles to control her emotions that she transforms, which is a problem since morphing into a ten-foot furry animal does a lot toward accelerating her already fraught teenage hormones. In all the chaos, Ming Lee assures her daughter that it can be reversed with a ritual during the next red moon.

There are several more conflicts, including the next red moon conflicting with the 4*Town concert and the arrival of Ming Lee’s mother (Wai Ching Ho) along with several of Meilin’s meddling aunts, who bring more comic relief, as well as proof that the generational tension is not exclusive to Meilin and Ming Lee. To the degree that Turning Red is a metaphor (for puberty, for coming-of-age, for that delicate balance of accepting your culture while separating from tradition), the story is quite effective. But the key to Pixar is that their films are almost always more entertaining at face value, with witty characters and sincere emotion. This film doesn’t have the existential gravitas of Soul or Toy Story 3, but it’s more micro view of Meilin’s struggle with her place in her family and the world at large is just as captivating.

Both Pixar and Disney have been making legitimate attempts to tell stories outside of mainstream American cultures. This kind of pivot can too easily turn into labored pandering toward virtue signaling white audiences, but they’ve made honest efforts to hire storytellers and filmmakers with substantial connections to the cultures they choose to depict. Director Domee Shi, aside from being Chinese-Canadian herself, is also the first woman to get a sole directing credit on a Pixar film, a distinction that goes beyond superficial platforming and pays real dividends (the sheer mention of menstruation in this film feels like a seismic shift in Disney’s output). Turning Red‘s animation style, while equipped with many of the usual calling cards of Pixar’s excellence, does provide new, unique choices, shying away from the studio’s taste for realism and leaning into the stylization, reflecting not only the story’s mythical elements but the exuberance of Meilin’s spirit as well.

There have been actual misses since the end of Pixar’s mighty reign in 2010 (anyone out there want to talk about The Good Dinosaur?), but their revival in the last few years has proven just how successful they can be when they hit their sweet spot between lavish animation style and a devastatingly heartfelt narrative. Their dance of sentimentality that rarely crosses over into treacly melodrama is a wonderful one to watch. The film’s third act satisfies a lot of things – a major action set piece, a fierce emotional catharsis, even a stirring original song (from Billie Eilish and Finneas O’Connell) – and crescendos perfectly. The Pixar Cry is one of the better activities one partake in in a movie theater. You’ll unfortunately be unable to do this in a theater while watching Turning Red, but that doesn’t make it any less exhilarating.