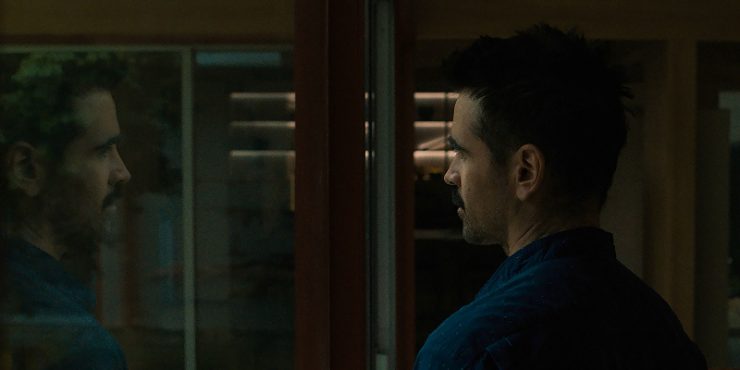 There’s a reason the uncanny valley is such a rich soil for science fiction. It lies at the heart of the human race’s existential crisis – in our attempts to create life (and prolong it), we only uncover more evidence of how fragile and finite the human experience is. From Ridley Scott’s Blade Runner (and the Philip K. Dick story it’s based on) to Kazuo Ishiguro’s immensely popular novel Never Let Me Go, we’ve been reckoning with our own human response to artificial intelligence before we’ve even had to legitimately contend with it in the real world. Our view is mostly bleak, even the treacly Bicentennial Man starring Robin Williams fathoms a being committed to service, emotionally enslaved if not physically. Kogonada’s After Yang (based on the short story “Saying Goodbye to Yang” by Alexander Weinstein) is another example in this tradition, but one that finds fascinating purviews into the human condition.

The titular “Yang” in After Yang is a fully functional “techno-sapien” (played wondrously by Justin H. Min) programmed to look Chinese with an infinite amount of knowledge and facts regarding Chinese history and culture. He’s purchased by Jake (Colin Farrell) and Kyra (Jodie Turner-Smith) from Brothers & Sisters Incorporated, the kind of blandly-named company that suggests fast and cheap service lacking the kind of human touch that this may require. Jake and Kyra purchased Yang to help with their adopted (and non-techno-sapien) daughter Mika (Malea Emma Tjandrawidjaja). Recognizing that Mika would need a connection to her Chinese culture that they couldn’t provide, Jake and Kyra hope Yang can center Mika. But when work demands keep them away from home, Yang becomes something more than a helpful accessory; he becomes Mika’s pseudo-sibling-and-parent, crafting a strong bond between the young girl and her perpetually youthful robot.

Which makes it extremely problematic when Yang stops working. While performing in a “family dance” competition (which is the stage for the film’s inventive and invigorating opening title sequence), Yang starts malfunctioning, and when they attempt to restart him, he refuses to turn on again. Mika is immediately sent into despair, unwilling to accept the reality. Kyra is skeptical that Yang will ever be fixed (she castigates Jake for buying Yang used, but Jake protests he was “certified refurbished”, one of many lines in Yang that is both a laugh line and a haunting reminder of the film’s stark setting). Jake does his best to find a way to get Yang working again. First taking him to a repairman (Ritchie Coster) who espouses alarmist conspiracies about the realities of companies like Brothers & Sisters (they’re spying on us!), before bringing him to Cleo (Sarita Choudhury), a museum specialist researching techno-sapiens. Cleo is not hopeful that Yang can be brought back to life, but she does see his body and his memory cards as an exciting opportunity to learn about these advanced lifeforms.

Writer-director Kogonada (for good measure, he is also the editor on his films) is famous for his contributions to the cineaste publication Sight & Sound and for his video essays on film theory and technique. His first feature, 2017’s Columbus, was another melancholy drama surrounding characters with complicated relationships with art and family. After Yang is a much more ambitious work, but just as visually arresting and emotionally involving. It’s mysterious future has self-driving cars that look like airport shuttles and minimalist, modern home designs. It’s a world unburdened by physical or cultural borders (architecture and landscape suggests Asia, accents give both UK and American), though prejudice still survives (Jake owns a robot but has a distaste for clones). After Yang‘s story confines itself in adroit locales, reflecting how claustrophobic these characters have become (they rarely exist in open spaces). As if the expanse of technology has only further boxed them into premeditated lives.

It’s only when Jake is given Yang’s memory bank that he sees beyond his hermetically-enclosed existence. Both Russ and Cleo encourage him to look into Yang’s memories – he wants proof of corporate wrongdoing, she wants to learn as much about Yang as she can. Kogonada’s framing of Yang’s memory-scape is a landscape of an emotional kind, visualizing his consciousness as a vast universe, with stars of memory and experience. Jake picks and chooses and sees a handful of short videos with himself and Mika and Kyra, but he also sees many with a young girl named Ada (Haley Lu Richardson). Did Yang have the capacity for love? The videos certainly suggest an infatuation, and when Jake meets Ada face-to-face, she admits an intimacy even if she won’t confirm its extent. Jake wanted to bring Yang back to life to help the inconsolable Mika, but in seeing Yang’s fuller experience, his own grief hits him violently like a wave.

The degree to which After Yang separates itself from stories like Blade Runner and Never Let Me Go is in its point-of-view. Where those books (and their subsequent film adaptations) humanize AI through crafting them into full-minded characters, Yang humanizes Yang through Jake’s (and to a lesser degree, Kyra’s) perception of him. He becomes human as his human parents begin to perceive him as such, through their unexpected bereavement with his departure. It’s a tricky narrative technique – fraught with whiffs of colonialist sympathy – but Kogonada proves a deft enough writer to pull their empathy into something heartbreaking. A large portion of why Jake and Kyra are so sad is their own realization with just how limited they imagined Yang to be when he was alive. As Yang proceeds, Jake learns that there are perhaps many reasons to have suspicions with sinister companies like Brothers & Sisters, but it never detracts from the real impact Yang had upon their lives.

Columbus is one of my favorite films from the 2010’s, a criminally underseen drama with an incredible performance from Haley Lu Richardson. The wait between that and After Yang felt eternal. Yang – which was released this weekend, nearly a year after its premiere at the 2021 Cannes Film Festival – is more than worth the wait. It is a confirmation of Kogonada as not only one of the movies’ brightest critical thinkers, but as a masterful filmmaker, a precise formalist whose emotional intelligence allows him to craft fully-realized characters. His somber stories of souls lost in the meaning of existence have a brilliant micro and macro-significance. After Yang is simply wonderful, a triumph of filmmaking on every level, and an early candidate for the best film of the year.

Written for the Screen and Directed by Kogonada