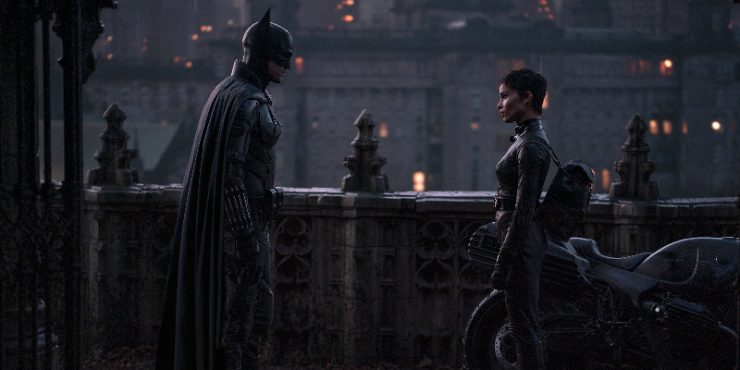 In both the first and final acts of The Batman, director Matt Reeves plays the somber sounds of Nirvana’s “Something In The Way”, the morose song that ends their iconic album Nevermind, released in 1991. Nirvana is a band that certainly sets a very specific tone, but it also recalls a specific time. It reminded me of the Batman films from the 90’s. Firstly, Tim Burton’s expressionistic takes, heavily stylized and acted with campy gusto. Then Jerry Schumacher’s subsequent follow-ups (the Batman films of my childhood) which took the camp to a whole new level, making inane films that popped with the kind of color and pizazz that alludes to something like, say, a comic book. The Schumacher films were so derided as cynical and superficial that we have since been doomed to over two decades of the gritty, moody (emo?) Batman, first from director Christopher Nolan, then Zach Snyder, and now from Matt Reeves.

This probably wasn’t supposed to be the takeaway from the Nirvana needle drop. It was supposed to be an immersion into the haunting world of Gotham City. It instead reminded me that Batman is a property that used to have intense stylization, that used to embrace a silliness that quickly turned passé for more discerning audiences. Batman has never been a sunny character, but his story wasn’t always so self-serious. Perhaps it’s telling that my favorite version of Batman is the one most universally hated, openly shameless about its product placement and absurd in its half-assed characterizations. The preposterousness of this character and this universe screams for a level of ridiculousness that these prestige-seeking filmmakers are too afraid to approach.

Robert Pattinson is the latest movie star to take on the role of the caped crusader. His Bruce Wayne is an obsessive recluse, hardly seen by the outside world as a playboy or a philanthropist. Most of Wayne’s time is consumed being Batman, wearing heavy Robert Smith eye shadow, dawning an elastic but bulletproof Batsuit, and fighting bad guys throughout the crime-infested Gotham City. Most of the Gotham City Police Department have little time for the vigilante Batman, as he rubs against the corruption that a lot of them benefit from. It’s the clean police lieutenant Jim Gordon (Jeffrey Wright) who trusts Batman the most, lighting the infamous bat signal when help is needed. And help is needed when a new killer is hunting the elite within Gotham’s highest circles.

It’s The Riddler, played with deranged intensity by Paul Dano. The Riddler spends most of The Batman behind a mask himself, picking off major figures within Gotham’s rotted power structure. An incumbent mayor is bludgeoned to death, a police commissioner is tortured with rats, a district attorney has a bomb strapped to his neck. Each murder comes with a greeting card directed to Batman equipped with a troubling riddle with clues to his motives and oncoming kills. The riddles lead to leaders within Gotham’s robust crime syndicate, including mob boss Carmine Falcone (John Turturro) and his right-hand man, Oz Cobblepot (Colin Farrell), more commonly known as The Penguin. It also leads Batman to Selina Kyle (Zoe Kravitz), a familiar figure in Oz’s seedy nightclubs, who also moonlights at Catwoman, another mask-wearing crusader, though her interests lie more in vengeance than in justice.

The Batman is a very poor facsimile of the gritty crime dramas of Martin Scorsese and Paul Schrader, filtered through the lens of a poor man’s David Fincher. Referencing great films of yesteryear is not a cinematic crime in and of itself, but much like 2019’s Joker, the allusions are cosmetic attempts to glean credibility while having seemingly no understanding of what those films were trying to say. (In openly recalling the grisly murders in films like Se7en and Zodiac, The Batman only calls attention to how much better those films are.) Matt Reeves, a skilled director who has made good blockbusters like Cloverfield and Dawn of the Planet of the Apes, feels all over the place here, narratively and formalistically.

The film’s plot is an everything bagel of bereavement, mental health, and institutional corruption. If a character isn’t an active member of Gotham’s disreputable higher circle, they are innocent bystanders of it. And if they’re lacking even that, they have a dead friend or relative to goose the sympathy. The film’s bloated 176-minute runtime tumbles over plot redundancies and lingers on emotional components that I simply could not find time to care about. One can admire Reeves’ ambition here, but this is probably the most unhumorous, unspirited, unfun Batman film I’ve ever seen. It’s level of production and the quality of its cast does little to help it rise above its own morose slog.

Pattinson’s Bruce Wayne is an interesting take, haunted and brooding, never seeing the light of day, but his Batman is rote boilerplate, a spandex Sam Spade without charisma. Kravitz proves capable as Catwoman, though her place in this movie always feels allusive, like she’s only there because the scripts calls for her to be (despite my feelings for The Batman, a standalone film for Kravitz’s Catwoman is something I’d definitely want to see). Farrell’s Penguin is a MadTV Robert De Niro impression under twelve tons of prosthetics. Jeffrey Wright and Andy Serkis, two of our most dependable supporting actors, are resorted to speechifying father figures, basically indecipherable from one another (in a three hour movie, that kind of overlap feels particularly egregious). It takes effort to make this talented of a cast so ineffective, but The Batman proves up to the task.