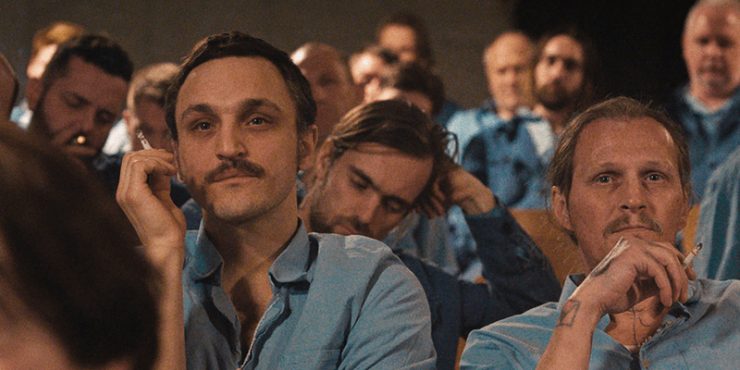 In the aftermath of World War II, Germany began an arduous journey toward rebuilding; a process that continues to this day. Even after the Allies took down Hitler and emptied the concentration camps, freedom was not a guarantee for all. Under paragraph 175 in Germany’s penal code, homosexuality was a crime, punishable by a year (often more) in prison. This is why Hans Hoffman (a tremendous Franz Rogowski) gets released from the camps in 1945 and is brought directly to a prison to serve his time for sexual perversion. By the time we meet Hans, he has a cavalier relationship with his imprisonment. Persecuted first by the Nazis and then by the police, confinement becomes part of the reality of his everyday life, institutionalizing not only his physical body but his sense of intimacy as well.

Great Freedom weaves together several timelines, all with Hans and all in the same prison. One timeline is immediately after WWII but another is in 1968, where Hans finds himself once again behind bars after procuring sexual favors in a public bathroom. The film opens with his many escapades with various men in the same four-stall space and we don’t realize as we watch him give and receive generously, that he has already spent many years in jail for this kind of activity. As a courtroom casually gives out his sentence, he seems unsurprised. In prison, he’s reunited with Viktor (Georg Friedrich), a cellmate from his initial imprisonment in 1945. Back then, Viktor was disgusted by being roomed with a gay man, until he sees Hans’ camp tattoo and a wave of sympathy softens him. Viktor offers to tattoo over the number branded into his forearm.

The film’s script (written by director Sebastian Meise with Thomas Reider) moves back and forth between 1945 and 1968, as well as 1958, after Hans is imprisoned after his relationship with Oskar (Thomas Prenn) is discovered by the police. Oskar is in the prison with him, but cannot cope with the confinement as Hans can. Hans sees prison as an inconvenience, but Oskar is willing to give up his way of life if it means being free. In 1968, Hans has a spirited fling with a younger man named Leo (Anton von Lucke), who was arrested for the same public restroom dalliance that opens the film. The relationships with Oskar and Leo, paralleled, are a graphic exhibition of Hans’ persistence in pursuing love even in incarceration, but it also documents how past traumas reshape his judgment over time.

The film’s title conjures philosophical ideas about our autonomy in the world. Hans’ relationship with freedom is skewered from very early on. He has spent decades being abused and imprisoned just for his very existence. His choice is a conscious one: he prefers the freedom of being himself and exploring his passions over the freedom of being outside the prison walls. The physical and psychological pain inflicted upon him is a reality he’s so familiar with that it’s not worth it to also sacrifice his dignity as a gay man. Meise has great respect for Hans, but he doesn’t fall into the trap of making his choices noble or heroic. Hans has a problem with authority and likes taking unnecessary chances, but Meise (and cinematographer Crystel Fournier) finds great beauty in his spirit.

Despite his many romances, Hans’ main relationship in the film is with Viktor. Viktor, a homophobe and a murderer, takes pity on Hans, and even though he knows he will lose face among the other inmates, chooses to make his fondness for Hans known. Their intimacy does cross the line occasionally into a physical affection, but it’s clear that it’s their emotional attachment that helps both men serve their time. When Viktor becomes a heroin addict, Hans is there to help; when Hans loses a great love, Viktor is there to show support. Their communion is beyond some Green Book-esque resolution of differences, but an actual spiritual connection. Friedrich’s performance, equally tender and fierce, is a balancing force throughout Hans’ psychological journey.

Great Freedom is a remarkable film. Not the easiest watch, it still surprises with gorgeous imagery and poignant performances. Rogowski, always so good, is heartbreakingly brilliant here. His Hans, a glutton for sex and punishment, is a much more cerebral figure than what’s on paper. This role asks a lot, physically and mentally, and it asks him to do it portraying the same character in three different decades. Miese is a smart enough filmmaker to keep the timelines distinct (and his editor, Joana Scrinzi, does a terrific job as well), showing the evolution of how Germany found ways to keep oppressing men like Hans. The film’s final act is a stunning, fantasy-like exploration of the film’s themes. I won’t give it away, but Meise crafts a tremendous crescendo, that both confirms the beauty of Hans’ spirit but also accounts for the trauma he has sustained.