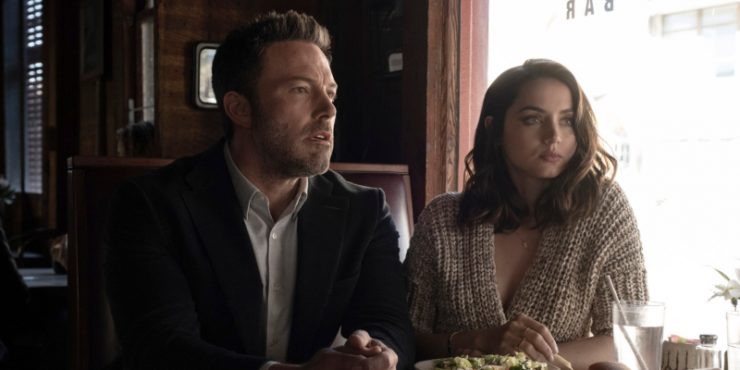 Adrian Lyne is the master of a genre that no longer exists. His erotic thrillers of the 80’s and 90’s were massive hits which titillated audiences and maximized the sex appeal of their stars. The summit was Fatal Attraction, the 1987 film which was both a steamy sex romp as well as a bruising warning against such behavior, a juicy mix of salaciousness and chastity that hit the sweet spot for American moviegoers. It was the highest grossing film of that year, and got six Academy Award nominations, including Best Picture and Best Director for Lyne. His run, which also includes 9 1/2 Weeks and Flashdance, produced films that were beloved by many but freighted with messy gender politics that aged out as audiences became more discerning in the 2010’s. Deep Water, his latest film, is probably the closest one can get to reaching a Fatal Attraction in 2022, but it proves that even attempting it can be quite a folly.

Lyne was never a provocateur on the level of his contemporary Paul Verhoeven and even his most explicit creative instincts tended to bend toward the mainstream. Deep Water is his first film since 2002’s Unfaithful, a cheeky infidelity drama that got Diane Lance a Best Actress nomination, but was an early sign that maybe his act was starting to get stale. Deep Water is not going to be any kind of awards season player, and with a lengthy history of COVID-related release delays since 2020, the film has developed the kind of notoriety that could make it dead on arrival. The announcement that it would get its premiere on Hulu may have been a blessing in disguise, allowing curious audiences to treat this like an at-home midnight movie, free for you to ridicule out loud from your couch.

Preposterously, this film is based on a novel by suspense master Patricia Highsmith. That fact becomes less surprising when you learn the screenwriters adapting her work are Sam Levinson (of Euphoria fame) and Zach Helm, the brains behind 2007’s Mr. Magorium’s Wonder Emporium. These kinds of facts are more interesting to talk about than the film itself, which occasionally has the distinction of being a “fun bad movie” but often is a flop in what it’s trying to accomplish. One of the things it gets right is casting Ben Affleck as Vic, a retired tech scientist (he developed microchips used for war drones, whoops) who has retired and taken up snail farming as a hobby. He’s married to Melinda (Ana de Armas), a gorgeous wild card who hops from one lover to the next, shamelessly flaunting her boy toys in front of Vic and their friends. Not even their young daughter, Trixie (Grace Jenkins), can keep Melinda faithful.

At the very least, Deep Water understands the best way to frame an actor like Affleck: as a downtrodden man, forced to perpetually face the consequences of wherever his dick leads him. At times he seems content to accept his imperfect marriage. The Permanent Cuck seems to him a more desirable persona than The Divorced Man. At other times, he appears to be quite bothered. One of Melinda’s lovers has disappeared and Vic makes a tasteless joke that he killed him. Or is he joking? When he says this joke to Melinda’s “friend” Joel (Brendan Miller, looking like a cheap 90’s Brad Pitt impersonator), it’s clear that Vic’s trying to intimidate. So which is it? Does he hate being betrayed or is he turned on by the violence motivated by his wife’s behavior? And as for Melinda, what is her angle? Is she a depressed mother and housewife or does she get off on Vic’s humiliation?

There are actually interesting questions about kinks and the efforts of a married sex life that Deep Water could explore, but it mostly does not. It instead follows a fairly redundant plot: Melinda seduces a man, that man disappears or is found dead. Vic is the main suspect, but close friends and even the police turn the other way, sympathizing with Vic’s cheated-on husband character. The one exception is Don Wilson (Tracy Letts, in a too-good-for-this-movie performance) a writer who sides with Melinda, believing Vic to be a murderer. What motivation Don has in involving himself in their life is a wonder to me – like many plot points in Deep Water – but Letts at least has a sense for what this movie needs: a ridiculous character whose acts of sincerity inspire befuddled laughs.

De Armas is the the unquestioned star here. She is saddled with a character whose reasoning is flimsy and behavior hard to account for, but her mastery of the film’s tone is far above anyone else. Her chemistry with Affleck is good (a remnant from their previous itemhood), and she seems to be the only person in this “erotic thriller” selling sex appeal. The movie is actually more chaste than you’d be led to believe, but not for lack of trying on her part. Her “bad mom” routine is hilarious, getting furious when her daughter plays “Old McDonald Had a Farm” and often forgetting that Trixie even exists (which is an accusation that could also be lobbed against the film itself). Her character does become pure male gaze when the film does turn up the heat but De Armas walks away with her dignity intact, proving once again her status as an exciting, genuinely talented performer.

Another rumor in this film’s troubled journey to audiences is that a robust runtime cut was made right before release, and what was once going to be a 153-minute movie (still the listed runtime on Google) became a 115-minute movie. We’ll never know whether that missing forty minutes could have rescued what is a rather disjointed movie, haunted by unnatural pacing and nonsensical character behavior. The secrets and lies that wander between Melinda and Vic are obscured in ways that disorient, and then revealed in ways that feel too obvious. I had some fun with the zanier aspects (Affleck with his snails, Jacob Elordi failing to play a man who knows how to play piano), but Deep Water often loses steam both within its own plot and within any erotic chemistry it hopes to inspire.