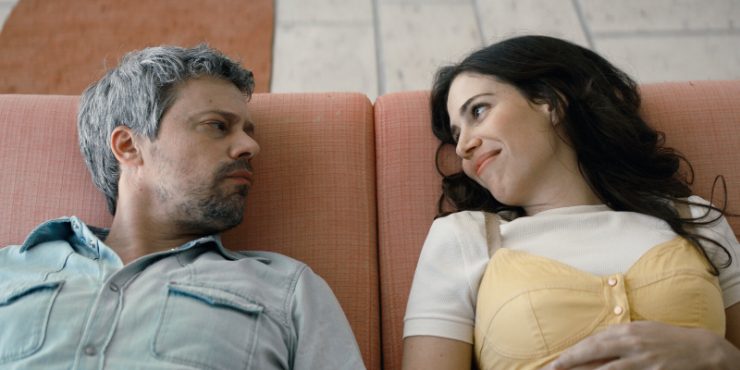 There’s an aggression to the intellectuality of Nadav Lapid’s two latest films. 2019’s Synonyms was a blistering character study of a rowdy young man, and former IMF soldier, trying to flee his military obligations in Israel. That film has a thematic alacrity, screaming through scenes involving sexual and emotional manipulation, and the titanic burden of nationalism. Ahed’s Knee, his latest, premiered on the festival circuit last year, before getting it’s US release this month. Ahed’s Knee is no less frustrated than Synonyms and no less riddled with anxiety about the inheritance of colonialist heritage. The great Avshalom Pollak plays a caustic film director named Y, who travels to the Avara dessert to screen one of his films. Y has a bubbling contempt for the Israeli government that has asked him to come and he has a few surprises in store for the screening.

Lapid’s camera is extremely restless, frequently jutting from end to end, disorienting the center screen in a way that both puts you into Y’s scattershot headspace while also keeping you at arm’s length in attempting to foresee his motives. A large chunk of the film is Y chatting with Yahalom (Nur Fibak), the surprisingly young libraries minister in charge of handling Y. Yahalom is friendly (almost flirty) with the veteran filmmaker, and she’s quick to tell him that she’s a fan of his work. Y is receptive to her amiability, though their scenes are riddled with a tension as Y’s sinister intentions are still unknown. Back in Jerusalem, Y’s mother and creative partner is sick with cancer. We never see his mother in the film, but her presence is an intense specter hanging over all of the events. Her fate has an unspoken weight on Y’s radical aspirations.

You’ll spend the entirety of Ahed’s Knee expecting a major reckoning in the film’s final act but when it finally comes, it is still unlike anything you may have predicted. Lapid’s unwavering forcefulness is often cut with stirring pop music asides that both work as a decompression while still maintaining the story’s frantic hysteria. There’s a punishing element to Lapid’s work and the relentlessness of his ideas can alienate audiences unfamiliar with the geopolitical context of his stories – in a way, the alienation is very much intentional. The protagonists of both Synonyms and Ahed’s Knee are attempting to process impossibly complicated realities, trying to make sense of absurd dualities (mainly, Israel’s stance as a symbol of liberation while being a ghastly practitioner of imperialist violence) that can never be reconciled.

Written and Directed by Nadav Lapid