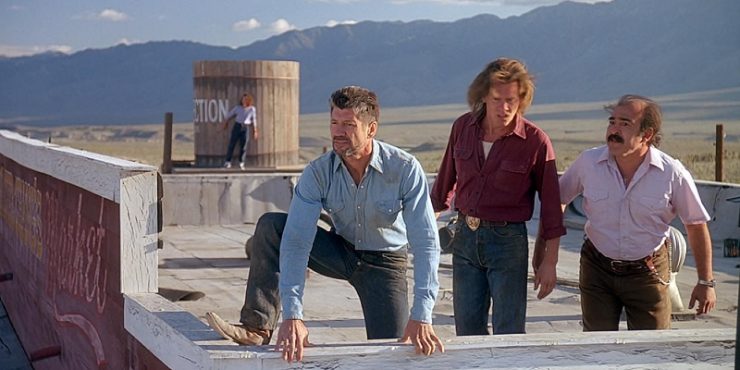 The ascension of a midnight movie comes from hitting that sweet spot between bubbling self-awareness and dismissive carelessness. People will make themselves blue arguing as to whether camp can be self-aware, or to what level it should be. Tremors is a great example of a film that feigns its own lack of self-awareness, that plays upon its own supposed ignorance and naiveté to turn a gross-out monster movie into a camp classic. Giant grotesque monsters (think gigantic slugs 50 yards long with the width of an SUV and several vicious snakes for a tongue) rumble underneath a desert valley in Nevada. In a classic horror movie set-up, an isolated town of simple folk are left to fend for themselves when these things finally decide to make their introduction.

Kevin Bacon is the film’s star and the role appeals to his offbeat screen presence. He plays Valentine, a handyman whose name belies a life devoid of romance, working as a handyman with Earl (Fred Ward). The witless pair are frequently searching for a plot to get themselves out of town and into a more enjoyable life. After a particularly rough day of removing garbage and emptying septic tanks, the two decide to skip town no questions asked. One problem, every time they try to hit the road, they continue to run into something ominous and strange. First is a dead man at the top of an electrical tower, then a local shepherd and his flock are found savagely killed, then a pair of outside construction men meet a similar fate. They are not simply dead, but gruesomely murdered, with plenty of blood spewed and body parts missing.

Earl and Val, stuck, alert the rest of the town which includes a general store owner (Victor Wong), a worried mother (Charlotte Stewart), an obnoxious teenager (Bobby Jacoby), a gun-toting couple (Michael Gross and Reba McEntire), and a visiting grad student named Rhonda (Finn Carter) who is studying seismology in the area. Rhonda’s expertise proves vital in helping Earl and Val defeat this monstrous creature, but often they are a step behind. Living underground, the monster moves stealthily, often sucking its victims down like instant quicksand. It senses vibrations, with particularly sensitive hearing. As they (we learn there are more than one) begin to corner the townspeople, Earl, Val and Rhonda come up with a variety of plans to help save everyone’s lives.

The film was released by Universal in 1990, and those alive in that period will appreciate the film’s practical visual effects, which might recall older attractions from the Universal Studios theme park, where most of the charm was the modest machinations that would “put you inside of the movie”. That the monsters in Tremors live underground is as savvy as the shark in Jaws spending most of the movie underwater, but don’t be fooled into thinking that the film is presenting a less-is-more strategy. Tremors provides you plenty of opportunity to see the monster up close, its gelatinous saliva sloshing on most surfaces it touches, its bulbous head breaching the floors at any given moment, and its entrails exploding like moist fruit pulp in the few moments when they’re able to kill one.

Tremors is shooting for quantity. Its screenplay (by Brent Maddock and S.S. Wilson) is the kind of tight, well-workshopped piece of studio product that’s made to go down smooth, with enough action to keep you occupied and a big enough pinch of characterization so you don’t feel cheap. The steady use of humor (as well as the sharp comedic timing from both Bacon and Ward) eases tensions, keeps stakes relatively low, and allows the audience to be less preoccupied by the life-and-death scenario and more fascinated by this disgusting predator – which is what the entire film is a stage for. Director Ron Underwood keeps the characters moving across the playing board, making the board smaller and smaller along the way, leading to a mountain face showdown with an incredibly yucky (but satisfying) finale.

Tremors trades in narrative innovation for technical ambition. It sees opportunity in setting, whether it be a convenient store, a desert or a pick-up truck. The characters are a bit of a patchwork from other, better, movies with motivations that are only there because, well, isn’t it more interesting that way? The difference here is the level of buy-in both from the filmmakers and the cast, that monster movie schlock is an honorable tradition, a piece of self-made mythology within an American culture that usually has to borrow that from others. Jurassic Park is probably the supreme example of this, but that movie is much more serious, and Spielberg is much more adept at mixing the human element within manipulated suspense. Tremors is asking its audience to have a little more fun.