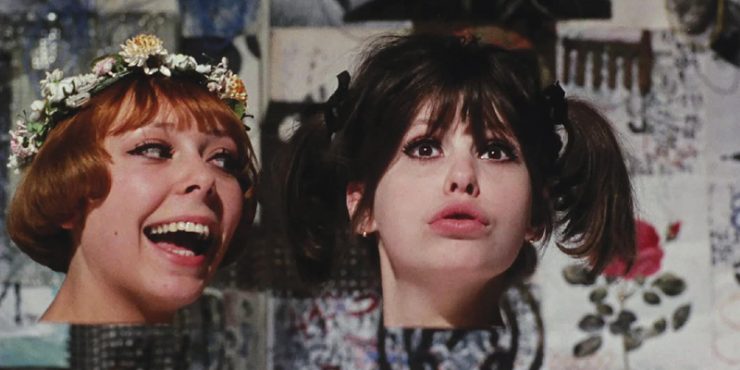 A trademark of European cinema from the 40’s through the 60’s is its expansion of cinematic forms, but even the word ‘expansion’ often feels limiting. Through expansion, filmmakers in countries like Italy and (most famously) France created something that felt more like reinvention. A “New Wave” descended upon the film landscape. Daisies, an iconic entry (perhaps the iconic entry) from the Czech New Wave, embodies the spirit of these movements, and in certain ways, is a reinvention of its own, not only of standards within visual and narrative norms in cinema, but of social conventions in society. In its manic chaos, Daisies reimagines cinematic languages to reorient how audiences perceive a film.

Godard’s Breathless is most often credited with introducing the New Wave to movie audiences, but with Daisies, writer-director Věra Chytilová proves a much more enthusiastic practitioner of anarchy. Her film is less preoccupied with American movie archetypes, and she is less beholden to the beloved auteur. The set-up is simple: Two young women, both named Marie (played unforgettably by Jitka Cerhová and Ivana Karbanová), wreck havoc within several different social spaces. They go to an elegant restaurant with a series of older men only to stuff their faces with food and mock them, they prance in front of an apple tree signifying the Tree of Knowledge, they disrupt a performance in a 1920’s dance hall, they light a fire inside their studio apartment. All the while, the Maries contemplate good and evil, life and death, men and women, seldom with anything more than juvenile interest.

The film’s sequences are connected loosely if at all. More often, there are total non-sequiturs separating one scene from another, and anyone looking for a connecting arc would be left disappointed. The girls go back and forth between being active participants in their schemes or tittering voyeurs of their destruction. Even their own sense of responsibility for what they wrought is metered out inconsistently. Scenes of eating often develop into grotesque displays of gluttony, and other scenes of seduction (in addition to the men in the restaurant, there is also an obsessed butterfly collector) always end with the male pursuers sexually frustrated, either visually annoyed or emotionally comatose. Their actions are often accompanied by a farcical soundscape which goes a way towards enhancing the film’s surreality.

The narrative mayhem is accompanied by a distinctive color palette which visualizes the disruptive nature of Chytilová’s film. At any moment, Daisies will go from color to black-and-white, then to yellow, red and purple, utilizing filters to reinforce the film’s theoretical instability. We see the Maries in every color, even no color at all. The film is shot by Jaroslav Kučera, Chytilová’s husband and creative partner, and the two perfectly illustrate the childish behavior of the two Maries and its literal effect on the film itself. At times, the movie seems unable to sustain the Maries’ insatiable need for chaos. In one famous sequence, the Maries turn on each other with a pair of scissors, chopping off limbs and other body parts, until they are left as a pair of floating, body-less heads. Even then, we see that their energy has not been stymied.

The film’s opening credits (a note-perfect introduction to the film’s odd, uneven tone) is cross-cut with images of the US Navy carpet bombing areas in the Pacific during World War II. This along with the film’s conclusion, which comes with text mocking those who get upset over “trampled-upon trifles”, suggest a political undercurrent. Commentary on gender is perhaps most explicit, specifically in a sequence where we see the Maries slicing various phallic-shaped items while in the background we can hear the butterfly collector pleading his love for them. In a broader sense, the film’s unstable visual motif seems to suggest a global inability to properly understand and nurture unconventional women. Being spoiled is a frequent conversation topic of the Maries, and Daisies shows a humorous but ominous vision of what the world thinks should be done to those who take advantage of the world in front of them.

Films as conceptual as Daisies lend themselves to analysis, and I’m sure scholarly minds have had a field day with this text, but I also think it’s important to appreciate everything that this film provides at face value. A singular vision, which appreciates both beauty and eccentricity, that both states an allegiance to femininity while crying out in support of individualism. The film’s men, supposed figures of wisdom and stability, continually find themselves undone by these fierce but absurd women. The Maries look young and act even younger, Cerhová and Karbanová never missing an opportunity to imbue the Maries’ behavior and body movements with a schoolgirl’s restlessness and adolescent dismissal of authority. Daisies appreciates the audacity of these women, making farce out of their predicaments and commending their resilience, and while it stops short of excusing their culpability, it does question the need for culpability in the first place.

Like Agnès Varda in France, Chytilová was a woman working within an influential film movement where most of the credit for true innovation was given to men. The Soviet takeover of Czechoslovakia truncated Chytilová’s career and her creative urges often came at odds with the Soviet censors, limiting distribution of a lot of her films after 1968. Daisies is her widest known and most beloved film, its images becoming iconic within the realms of international cinema (in a recent BBC Culture list of The 100 Greatest Films Directed by Women, it was listed at #6). Even in 2020, there is still a fearless quality to this film, a moving sweep of boldness that cares little for those who won’t take the time to comprehend it. “Does it matter?” one of the Maries asks toward the end of the film. What ‘it’ is – like a lot of things in Daisies – is subjective, but if we’re asking about the film itself, the answer there is already obvious.

Written and Directed by Věra Chytilová