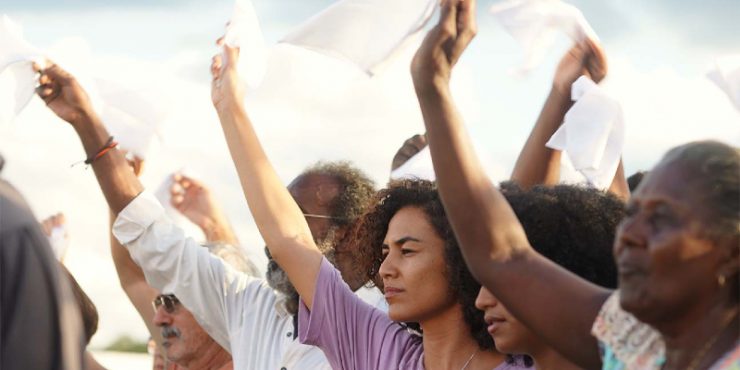 Bacurau is currently streaming on Kino Now as part of their Kino Marquee Virtual Arthouse Program, which allows you to pay a rental fee which goes toward an independent movie house of your choice. I rented Bacurau for The Film Society at Lincoln Center, but it is available for independent cinemas across the country. This is a pretty cool way to both see new independent film releases while still supporting the small theaters we love all over the country.

Bacurau has all the hallmarks of genre, though I think you’d be hard-pressed to decide which genre it actually is. They all seem too limiting to the wide scope of the film’s reach. Western, some may say. Science fiction, certainly. Horror, I wouldn’t put up an argument against it. Its discomfort in its own skin is part of its allure. After all, we are dealing with some pretty uncomfortable material. A small fictional city – the Bacurau of the film’s title – finds itself under attack, by bureaucracies that wish to exploit political potential, as well as by a group of gun-toting, blood-hungry madmen. Which is the bigger threat: the physical violence or the existential colonization? It’s surprising how much easier it would be to defend yourself against one over the other.

Director Kleber Mendonça Filho is a storyteller preoccupied with the damaging properties of colonization in its various forms. His previous film, Aquarius, was an astonishing, no-stone-unturned dissection of one woman’s physical, spiritual and intellectual battle against gentrification in Rio de Janeiro. Like that film, Bacurau uses Mendonça’s home country of Brazil as a symbolic stand-in for the world at large. The massive South American nation’s mix of various races and cultures and classes allows Mendonça to make incisive points about the exploitative nature of humanity. With Bacurau, he shares a writing and directing credit with Juliano Dornelles, who moves Mendonça away from philosophical pondering and into more explicit cinematic metaphor.

The metaphors begin with the village of Bacurau, which sits within the outskirts of Southern Brazil – a sertão as it is called. The seemingly primitive community lives isolated from the many comforts of contemporary society, but it is quickly apparent that the village has traded modernity for freedom, without sacrificing intelligence or self-sufficience. They’ve achieved a special level of independence, but they must still fight against intervention. A local government in local Serra Verde blocks a dam which provides water, and Serra Verde mayor Tony Junior (Thardelly Lima) tries to mortgage the water into votes. Bacurau, a tight-knit group which meets most outsiders with hostility, does not react well to the mayor’s attempt at extortion.

When Bacurau’s cherished matriarch, Carmelita, passes away, it brings to town Teresa (Bárbara Colen), Carmelita’s granddaughter. Teresa had been away for a period and tries to reacquaint herself with the mysterious town and its people. Her father, Plinio (Wilson Rabelo), is still an influential teacher and town leader and Mrs. Domingas (a truly phenomenal Sônia Braga) is still the medical authority. Teresa’s friend Pacote (Thomas Aquino) now goes by the name Acacio, and has gained a small celebrity as an effective killer within the army of Lunga (Silvero Pereira), a violent populist leader. Lunga’s men are ferocious defenders of Bacurau’s purity, and not everyone in the village agrees with their tactics.

Carmelita’s death leaves Bacurau vulnerable to new predators, and they come in the form of an international, bloodthirsty group of gringos who travel to Bacurau with the goal of slaughtering the population with the aid of UFO shaped drones that keep surveillance over the town. The group is led by Michael (Udo Kier), a mercurial German-American who guides his gun-toting crew with direct, sonorous statements. What is their purpose? Why are they doing this? Their ruthlessness does little to explain their reasoning, outside of the fact that they are a group of whites from around the world, and Bacurau’s citizens are all black and brown. Is their motivation pure racism? As they continue with their mission, their behavior begins to contradict itself, and in-fighting causes ripples within them.

Bacurau eventually leads to a standoff between the townspeople and the killer mercenaries, a showdown worthy of Leone and Kurasawa, with enough blood to satiate Eli Roth. Mendonça and Dornelles seem to find great glee in the bloodbath that the film ultimately becomes. By the conclusion, the film’s metaphors give way to straightforward messaging about the subjectivity of barbarity and civilization. It seems to be trying to recalibrate our ideas of high and low culture, and who in our population is considered expendable and who is not. I say “seems” because I would be lying if I claimed to understand every aspect of Bacurau‘s thesis. The film practices misdirection as often as it exploits the trappings of genre filmmaking. The mixed bag seems meant to confound you.

From the beginning, Bacurau contrasts the strange and the frightening with the wondrous, but it feels like the script often allows its emotional arguments to overwhelm its logical ones. And perhaps that is the point. In a society where cruelty is the rule, absurdity holds larger sway than the larger constraints of comprehension. I’m not sure Bacurau completely works, though I would caution against trying to make an official judgment based on a single viewing. Aquarius was a film that masterfully bound together a variety of threads into a beautifully tight storyline. The binding agents are not as strong in Bacurau, but its visual ambition is grand, and its final product is unequivocal in its righteousness. This is a story about survival, and despite it’s sci-fi influences, it manages to feel more real than ever.

Written and Directed by Kleber Mendonça Filho and Juliano Dornelles