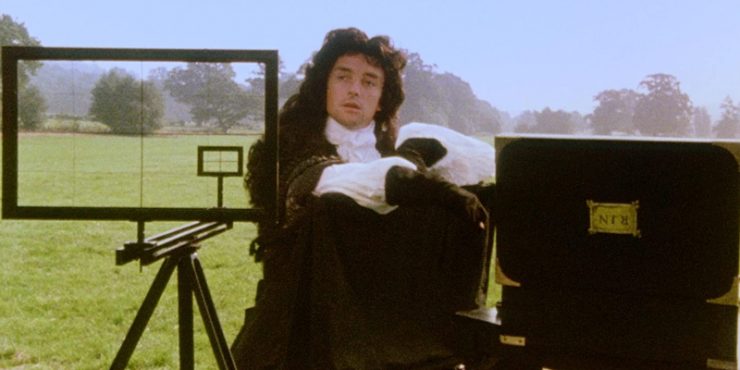 1982’s The Draughtsman’s Contract would kick off a fruitful decade for director Peter Greenaway. The muralist turned director, renowned for his strict formalist style and provocative themes, would be among the 80’s most celebrated and most polarizing filmmakers. The Draughtsman’s Contract, only his second feature film, will give you some hints as to why. Greenaway, composing the film in a style so stiff as to be absurd, presents us with a series of events, each loaded with micro and macro-aggressions, tinged with resentments dealing in both gender and class, and displayed in a manner of such clarity and brashness that it would be hard to reason why it’s ending would be so shocking. And yet, it is.

The titular draughtsman is Mr. Neville (Anthony Higgins), a cocksure figure known to mingle amongst an English aristocracy that he seems to care very little for. His reputation as a skilled artist precedes him, though his labor proves hard to patronize. In the film’s opening sequence, we watch both the stately Mrs. Herbert (Janet Suzman) and her daughter, Mrs. Talmann (Anne-Louise Lambert), try to convince Neville to visit their estate and produce twelve landscape drawings of their lavish home. It is meant as a gift for the brash and uncouth Mr. Herbert (Dave Hill) to be received when he returns from a two-week voyage. Despite several rejections, the mother and daughter persist, until Neville relents and agrees to produce the drawings under one condition: in addition to his standard pay rate, Mrs. Herbert must also agree to a nightly sexual favor. The terms are set and put to a contract with the estate manager, Mr. Noyes (Neil Cunningham).

Neville proves himself to be a rather troublesome guest, fierce in his demands for artistic conditions and bullishly aggressive in his rendezvous with Mrs. Herbert. His schedule is specific and binding, as are his expectations for his hostess’ compliance. Not all members of the house are so quick to honor his wishes, namely Mrs. Herbert’s son-in-law Mr. Talmann (Hugh Fraser), a German expat who simply cannot condone the strident nature of Neville’s instruction. Both house members and servants alike are expected to follow strict patterns. Furthermore, they are told to perform the same tasks and wear the same clothes each day, as not to disrupt consistencies within the drawings. When Mrs. Herbert attempts to void their contract, no doubt wounded by Neville’s seizing of social and sexual power, Neville callously rejects it.

This is about the moment when events in The Draughtsman’s Contract begin to turn a little strange. It is noticed, both by Neville and others, that certain pieces of Mr. Herbert’s clothing are appearing throughout the estate, and are thus being catalogued within Neville’s drawings. Correspondence shows that Mr. Herbert has never reached the destination of his travels and clues of foul play begin to arise. Furthermore, the estate’s garden appears to be terrorized and nurtured – in equal measure – by a naked man (Michael Feast) covered in body paint who spends most of his time posed as the garden’s various statues. The oddities multiply and add together as the film progresses, unveiling a possible murder and cover-up in which Neville’s drawings may end up being key evidence.

The film, in its modest set-up and construction, belies a complexity throughout its stories and characters that does not fully show itself until the exact moments the audience is prepared to. This is always the mark of good film direction, and it is a tremendous feat to watch Greenaway, with such distinct visual style, perfectly balance the crispness of the image along with the precision of the narrative. It is perhaps this time that I should reveal that this is the first and only Greenaway movie I’ve ever seen. The kind of director that manners the kind of expectation (both good and bad) that Greenaway does can be a difficult one to be introduced to; and surely, The Draughtsman’s Contract has its more unsettling moments (Higgins’ nonchalance throughout his acts of perverse cruelty take particular note).

What is perhaps most impressive is the economy with which the film’s story reveals itself. This is made more so when one learns that an original cut – said to fully unlock the film’s curios and eccentricities – was over three hours long. In the final version, Greenaway decides to eschew a more thorough approach, and with editor John Wilson, cuts the film down to its essence. Neville’s motivations, though never explicitly stated, come from a variety of resentments and moral principles. From the beginning, he appears to despise the opulence of the Herberts and Talmanns (in a film filled with flamboyant costume design, their decor appears garish next to Neville’s airy ensembles). Not to mention their British-Germanic Protestantism which shades prejudice against Neville’s Scottish-Roman Catholicism.

The degree to which these influence any or all of his behavior – and the degree to which the audience can decide it justifies his actions – is a puzzle at the center of The Draughtsman’s Contract that makes it so difficult to discern. It is made more difficult as the duplicities from Mrs. Herbert and the rest of her family rise to the surface, and the role of predator and prey shift back and forth between them. At various times the missing Mr. Herbert, Mr. Neville’s drawings and the contract itself is used in some form of blackmail from one character onto another. The backwards dealing seems to entangle itself, complicating the film’s narrative simplicity. That is, until the film’s conclusion which pays off with such ferocity, you find yourself second guessing your comprehension of what you’ve just seen.

Michael Nyman’s lively, Purcell-infused score is as lush as the rest of the film’s elements, adding a surging, excitable element to the stillness of the images. The images themselves, crafted with help from cinematographer Curtis Clark, merge Greenaway’s fascination with the bizarre with his preoccupation with Renaissance painting. The screen often is made to look like a canvas, and as Greenaway often frames the camera within Neville’s penetrative frame, it is clear how important (and how subjective) the director finds images to be. Neville’s drawings, brought upon from illicit means and so carefully crafted, become something rather more dangerous to the story, as The Draughtsman’s Contract eludes anything like a sensible ending. We are, ourselves, enthralled by the images created that make up the film, as are the characters driven toward malice by the images created within it.

Written and Directed by Peter Greenaway