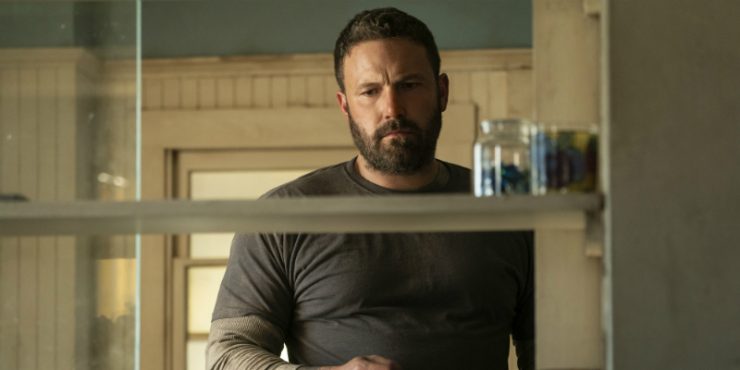 I don’t necessarily believe that Ben Affleck is an underrated actor. To the degree that his judgment can be questioned when accepting roles like the ones he chose in films like Gigli or Paycheck, I’m not sure there is a strong case made by the public that he is untalented – limited is probably a more correct adjective. What is underrated about Affleck and his career is his effectiveness. Consider Gone Girl, perhaps the best performance of his career, in which more than half of the brilliance in his work was his agreeing to do that part to begin with. He doesn’t actually shy away from roles that highlight his own personal foibles, and The Way Back is probably the most explicit example of that.

Affleck plays Jack Cunningham, a former high school basketball star whose journey through depression, grief and addiction has sent his life into a downward spiral. He has been separated from his wife, Angela (Janina Gavankar), for over a year, and she has started seeing somebody else. Visits to his family bring about sharp tension, particularly from his sister Beth (Michaela Watkins), who is the only family member who openly resents pretending that he is not a raging alcoholic. Perhaps the most insidious part of his alcoholism is how good he is at affecting normalcy when the time calls for it. His self-denial is robust in that he keeps his darkest habits away from those who most care about him.

Seemingly out of the blue, Jack is approached by his Catholic High School in an effort to get him to replace the ailing basketball coach. Jack has excuses ready – he has never coached before, he does not have the time, he has not even played since his teenaged glory days – but he neglects to mention his drinking, and despite trepidation, her decides to take the job. The task is daunting. The team is small, with their tallest player topping out at 6’3”. Their work ethic is suspect and their maturity is around where you’d expect a group of teenaged boys to be. It’s not at all shocking that this team is amongst the worst in the state, and that they haven’t made the playoffs since the State Championship that Jack led them to in the 90’s.

This is all very familiar stuff. Like as if someone had imagined what The Bad News Bears would be like played dead serious. The film is directed by Gavin O’Connor, who is at best over-directing this film with handheld immediacy, shaky zooms sprinkled in this film’s more emotional moments. His best movie is probably Warrior which is another exceptional sports movie much more sure of itself than this one. The Way Back‘s script is penned by Brad Ingelsby, who doubles-down on Jack’s tragic backstory. Halfway through the film you learn the heartbreak he has undertaken, and then only a few scenes later we learn that Jack also has daddy issues. Lots of signs of a script and director insecure with the weight of their material.

Which is truly unfortunate because The Way Back is actually quite good when it’s left to worry only about its two most interesting subjects: basketball and Jack’s self-destructive behavior. Like a lot of films of this type, Jack urges his team to embrace mental toughness to gain an edge over more talented teams, but the film is also familiar enough with basketball language to make a convincing case for the team’s eventual success. Jack urges the team’s quiet point guard, Brandon (Brandon Wilson), to be more aggressive, to take more of a leadership role. He manages to build a team around small players that emphasizes trapping, full-court presses, and a motion offense. The commitment that the film has to being a truly good basketball movie makes it quite compelling.

And then there’s Affleck, who has admitted while doing press for this movie that the role has been a form of therapy while he deals with his own alcoholism and crumbling marriage. It should make you uncomfortable how much we know about his private life, and The Way Back is Affleck revealing just uncomfortable he is with it too. It is textbook Affleck in many ways, playing Jack as a man whose charm and handsomeness has begun to run thin, devastated to learn how little he has after all of it is gone. If anything, The Way Back is helped by the fact that we know that the real-life Affleck has not dealt with the same kind of personal loss that Jack Cunningham has, and if you can do your best to ignore those overwrought details, you’ll recognize a truly heartbreaking confessional of a performance, some of the best work he’s ever done.

This is the kind of mediocre movie that is destined to be a classic in some form or another. Its sadness is but a frame to wrap around its very good basketball scenes, but the frame isn’t as solid as, say, Spike Lee’s He Got Game, which found a spiritual link between the game and the characters’ hardships. The Way Back has a ways to go in that regard, but its emotional appeals are effective, and while its more harrowing moments cannot escape being called “sappy”, it at least understands its standing as a melodrama, and performs accordingly.